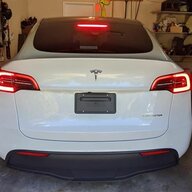 I have a phone mount in my new Model Y. I know, you aren't supposed to want a phone mount in a Tesla. But I like my phone, I like the audio and messaging UI I've been using for years, and you'll pry Google Maps away only from my rotting dead fingers. But power is a problem, because I don't like that I have to run a USB cable down into the center console where it blocks the door from closing and otherwise gets hung up on stuff.

There is a ton of space behind the display and under the dash, though. Thus the question: Is there easy access to ~3A of 12V power somewhere under the dash? There's nothing exposed, but I'm hoping there's a connector hidden there that someone knows about.
•••
Upvote 0

You can find some tips from the following threads:


Note: I also found some videos showing how to tap directly the 12 V battery and passing a wire on the passenger side,
using the hole in the firewall used for the Right-Hand-Drive steering wheel.
Last edited: Jun 5, 2021
Reactions: CapsEngineer
•••