Tesla launched its latest 4680 battery cell in 2020, a new tabless cylindrical cell with a much larger format that, according to the company, has six times the power and five times the energy capacity while being considerably less expensive.
Tesla has been manufacturing the 4680 cells at a "pilot production facility" in Fremont since the battery was unveiled. And it has also implemented large-scale production at other factories, such as its Gigafactories in Texas and Berlin.
Tesla reviewed that its first vehicle to use the new 4680 battery cell will be the Model Y produced at Gigafactory Nevada.
Drew Baglino, senior vice president of engineering at Tesla, gave an update on the manufacturing of 4680 battery cells following the publication of the company's Q4 2021 financial results. He said:


“Throughout 2021, we focused on growing cell supply alongside our in-house 4680 effort to provide us flexibility and insurance as we attempt to grow as fast as possible. As we sit today, sales from suppliers actually sort of exceeds our other factory-limiting constraints that you mentioned, Elon, in 2022. Or to say differently, 4680 cells are not a constraint to our 2022 volume plans, based on the information we have. But we are making meaningful progress on the ramp curve in Kato. We’re building 4680 structural packs every day, which are being assembled into vehicles in Texas. I was driving one yesterday and the day before. And we believe our first 4680 vehicles will be delivered this quarter.”
Drew confirmed that the firm is expecting the first delivery by the end of the quarterly using cells from the factory on Kato Road in Fremont; however, he didn't specify the pilot plant's production capacity.
Despite the fact that Tesla is dubbing it a "pilot factory," the company had set a target to manufacture 10 GWh of battery cells at the factory, which is bigger than many other full-scale battery cell plants.
Tesla redesigned its vehicles using new front and rear casting that integrate with the 4680 battery pack. To accomplish this, the automaker developed a completely new alloy to make it possible to cast some of the largest automobile parts. These fit right into a new "structural battery," doing away with the requirement for Teslas' redundant, parallel components.
Tesla expects to reduce its cost per kWh by 56% as a result of all these redesigns of the battery, cathode, and vehicle frame.

Advantage of the Tesla 4680 battery

Tesla's new 4680 battery cell represents a paradigm shift in automotive energy storage. The new cells are far cheaper and can store far more power per unit of volume. Besides, they have been redesigned as a structural element of the vehicle, resulting in a more inexpensive, more rigid vehicle.
In addition, the new 4680 tabless cell harnesses six times as much power, has five times more energy than 2170 (up from 5Ah to 25Ah), and enables more range (improvement in specific energy with 16%).

The following are a few more improvements offered by Tesla's new 4680 battery cell.


According to Tesla, the new form factor of the cell results in a five-times increase in energy and a six-times increase in power capacity. The automaker, however, ran into the same issue as anyone who attempts to increase capacity by making a larger cell. They have a thermal management problem.

Nevertheless, Tesla resolved this issue by developing the first tabless cylinder cell design. With this design, the bottom of the cell can be used for highly effective cell thermal management (shown on the right).

The new dry manufacturing process, which is based on the exclusive "proof of concept" process developed by Maxwell Technologies, enables pressing the active battery powder material directly into a film. While the process has not yet reached the production scale, it has a "clear path" to doing so.

In October 2020, Jeff Dahn, the head of Tesla's battery research team, disclosed some details about his research during an Energy Storage & Sustainable Engineering video conference. Dahn said he discovered that his cells had a lifecycle of more than two million miles.
His battery was put through 20,000 cycles of testing at a depth of charge-discharge of 100%, and he discovered that it can last 15,000 cycles while still holding 90% of its capacity. If you multiply 15,000 by his projected driving range of 217 miles, you will get 3.25 million miles in the worst-case scenario, which is when the battery is fully discharged and charged after every cycle. Thus, it is clear that Tesla has made progress toward achieving a battery that has a million-mile lifespan.
They also tried to perform charge cycles by varying the percentage of capacity at which the batteries discharge before being recharged, and they discovered that they could attain up to 15,000 cycles. It's interesting to note that if the batteries are discharged between 25 and 50 percent before recharging, the damage is practically nonexistent, as seen in the black line(picture below). For instance, a battery can decrease from 75% to 50%. 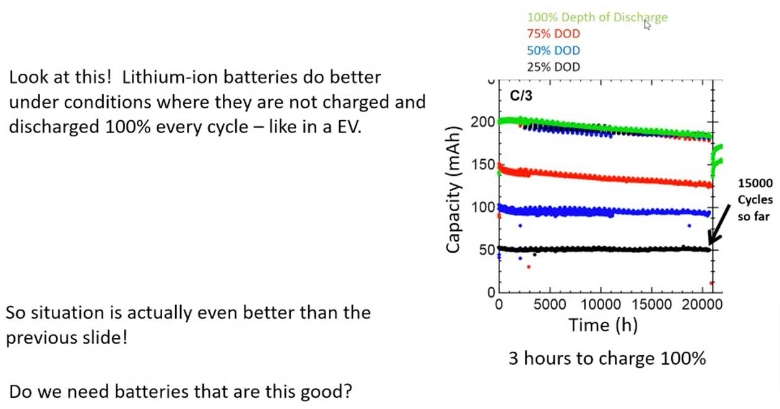 Thus, this demonstrates that a Tesla with 500 km of autonomy, which is used daily to travel 50 km to work, can drop from 80% to 70% of capability and recharge that 10% without practically showcasing degradation over time. This suggests that the new batteries are almost everlasting and vastly outlive the vehicle's lifespan.

Tesla 4680 batteries are anticipated to succed in electrical automobiles in 2022.

Another question that is brought up by this is whether or not you need a battery in an automobile to be that robust. Tesla will soon have "robotaxis" or rental vehicles, where hitting 1.6 million km is nearly important because they will be traveling many kilometers every day. They are also crucial for buildings and electric vehicles that can withstand long charge and discharge cycles. In turn, the possibility of using the electric vehicle as a battery for the house opens up without compromising its durability.
Tesla is now producing the 4680 batteries, so it wouldn't be surprising to see the automaker offer vehicles with incredible durability outfitted with these batteries in the future. In terms of cost and performance, this suggests that electric cars will eventually surpass explosive vehicles before 2024, which is drawing closer. Around 2022, the first vehicles with these batteries will probably go on sale.
LG & Samsung reportedly produced Tesla 4680 battery cell samples as they eye big contract

LG Energy Solutions and Samsung SDI are reported to have both completed the first sample cells of Tesla's 4680 battery cell as they eye a big contract from the automaker. According to Electrek, LG Energy Solutions is building a new pilot production line at its factory in Ochang, South Korea, for the 4680 cells.
In addition to those in-house production plans, Tesla is partnering with current battery suppliers to deploy their own production of the new 4680 cells.
Four of the world's biggest battery suppliers, Panasonic, LG Energy Solutions, CATL, and Samsun SDI, have all announced plans to build those 4680 cells for Tesla.
A recent report from The Korea Herald, a publication based in Korea, where both LG and Samsung are also based, suggests that both battery manufacturers have completed the first sample cells of Tesla's 4680 battery cell.
Samsung's timeline to bring the new battery cell to production is unclear. Still, LG has indicated plans to reach mass production as early as 2023, which would be shortly after Tesla's own production.

BAK presents their own 4680 cylindrical cell
The Chinese battery manufacturer BAK Battery presented a cylindrical cell in the 4680 formats at a trade fair - the format Tesla wants to rely on in the future. Unfortunately, no details are known about the chemistry of the new BAK cell.
According to the company's announcement at the China International Battery Fair (CIBF), BAK Battery (also known as CBAK or China BAK Battery) aims to deliver samples of its 4680 cells to customers in the automotive industry and other countries this year and manufacture fewer units. The Changzhou factory will start producing in series the following year. Additionally, BAK Battery had declared in January that it would work with JAC to produce round cells, including the 4580 type.
The 4680 cells will reportedly have a 25-ampere-hour capacity (Ah). On the other hand, a round cell from BAK in the 18650 formats (as previously used in the Tesla Model S and X) only has a 3 Ah capacity.
Reactions: Kevin Method, DNSJames, Dennisis and 7 others
Click to expand...

Member · From Florida
Global Vendor
A

father_of_6 said:
The standard (RWD) M3 has an LFP battery, which *is* different (in chemistry) to the long range and performance M3s. That's probably what you heard/read. Not to be confused with the 4680, which is a new form factor. The LFP battery *likes* a 100% charge, whereas the NCA battery in the LR/P does not.
Click to expand...

I have heard different stories on life cycles. Is it true the LFP is expected to last much longer than NCA?
Reactions: Lephturn
•••
I

Poolster said:
I have heard different stories on life cycles. Is it true the LFP is expected to last much longer than NCA?
Click to expand...

How much more range do you think these batteries will give?
•••
U

Shocking to think that battery construction and chemistry will continue to improve...forever.
Reactions: timberlights
•••