In the last year I noticed my car running the cooling fans a lot more often excessive and often even activating the AC compressor. In normal conservative Los Angeles city driving even in moderate temperatures the car would start running the fans full speed and AC every 40-60 minutes. It got worse and worse and even extra careful driving didn't help. Monitoring all kinds of data and temperatures via SanMyTesla I couln't figure out what was going on. I did notice the car was letting the battery go pretty hot, definitely hotter than in the years before. But the fans and AC would also kick in a lot even if when the battery was not hot or needed cooling. I could see on the data, many times the car was not cooling the battery but something else. It kind became almost embarrassing to have my car make so much noise.

I finally had Tesla's service take a look last year. They couldn't find any error messages and replaced one actuator that was working OK but was sending out an error. As expected it didn't help at all. The car was still running full cooling cycles every 45-60 minutes.

Just recently I replaced some underbody parts on my car and it required to take the front facia off. When it's off you get a good look at the three radiators. There is one long one in the center and there are two in front of each front wheel. What I saw was pretty sobering. The center one had been beaten so much by debris and small rocks from the road hitting it, that aprox 60% of the surface won't let air through any more. The thin metal fins between the cooling lines were bent so much that the airflow is partly blocked.

The two side radiators were in much better shape. During normal driving the loovers cover them so they don't get bombarded with dust and small rocks. But both had collected a good amount of dirt basically blocking the airflow to a degree. Especially the passenger side. Apparently the side closer to the shoulder (of the road) gets a lot more dirt and dust.

I cleaned out the radiators as much as I could from the dirt. I wasn't able to do much about the bent metal fins in the center radiator. With a small and thin screwdriver I was able to bend the metal back in place and clear the airway of a small area, but it's a very tedious process that would take hours for the entire radiator. I didn't have the time and left it as is for now.

It's been two weeks now since and I have already noticed a big improvement. The full blown (literally) cooling cycles with the fans running full blast is almost gone. Here and there the car still starts running the fans and a little AC but it's far less than before and far less frequent. Maybe once or twice a day. Before it was 6-10 times a day.

Unfortunately there is no easy way to clean the radiators without removing the front bumper. the center radiator can be hosed from the front pretty good. But the two radiators in the wheel arches are hard to reach.

If anyone has some ideas how to fix the damaged center radiator, please let me know. I'd hate to replace it.

On a different note, it shows once again (at least that's my experience) that Tesla's service people are not good. They just rely on the car's self diagnostic features. They only check for errors the car might report. If it doesn't, then that's all they are going to do and from their point of view, everything works fine. How can you not check the radiators if a customer says the car is showing excessive cooling activity? They don't even do a basic visual inspection. They don't trouble shoot issues.

How many miles on your car, and what model year is it?

How many miles on your car, and what model year is it?
Click to expand...

280k miles. 2014 Model S. Lot of road trips so the many many hours of high speed driving probably contributed to the radiator being so beat.
Reactions: 2101Guy, sorka and CaryRx
T

David99 said:
280k miles. 2014 Model S. Lot of road trips so the many many hours of high speed driving probably contributed to the radiator being so beat.
Click to expand...

High speed impact over a full 280k miles worth of rocks, bugs, etc. will do that.

Shame on Tesla's SC for not doing a proper diagnosis, but to be honest, your may be the first high-mileage Tesla they'd ever seen?

You might want to just replace that center radiator, either with a new unit or a low-mileage salvage unit. They can't cost all that much, and your old one has certainly earned its keep!

It only contains coolant so it's an easy replacement, just be sure to check your fluid levels for a few days as the air works it way out of the system.

Oh, and be sure to save up a bit for two new condensers (the side units) as well, but you'll have to have those replaced by a SC since they contain R-134a. They probably have another few years of life left, but they suffer too, just not as much as the center radiator that's always exposed to oncoming airflow.
Last edited: Apr 19, 2020
Reactions: outdoors, David99 and garrett5688

High speed impact over a full 280k miles worth of rocks, bugs, etc. will do that.

Shame on Tesla's SC for not doing a proper diagnosis, but to be honest, your may be the first high-mileage Tesla they'd ever seen?
Click to expand...

I think they should do the same any good mechanic does. Look at the components that are involved in the issue reported. There are other examples where they were clueless, gave me incorrect info...

I can get a center radiator for little money. I just hate doing the work of replacing it. The condensors looked OK in terms of bent fins. A few but overall not too bad. They are mostly closed while driving. One of those days I'll take the front off again and spend a few hours fixing the fins on all of them. Especially when it gets really hot here in the summer, it will help.

can a mod please fix the typo in the subject
D

A common aftermarket part for other cars is a mesh grill guard, typically made of a similar material to gutter screens. Seems like this is a good idea for the Model S, at least.

Here's one for a Porsche, for example:
Rennline Radiator Protection Grill Screens-Rennline, Inc. 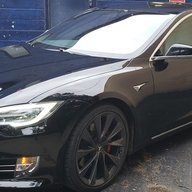 Dave EV said:
A common aftermarket part for other cars is a mesh grill guard, typically made of a similar material to gutter screens. Seems like this is a good idea for the Model S, at least.

Here's one for a Porsche, for example:
Rennline Radiator Protection Grill Screens-Rennline, Inc.
Click to expand...

I have a 2009 911 and after taking off my bumper and cleaning the large amount of debris I made my own using a metal grill I cut and fabricated onto it similar to the link. I was planning on purchasing one by a company in Europe but they stopped making it by the time I got around to ordering.

Might need to look at my old receipts to re-order the mesh and do the same to the S.
Reactions: Dave EV
J

Do they still have radiator shops? When I was going up in the 70s and 80s they was always a radiator shop around. You could pull the radiator and take it to them and they would pressurize it and leak test it. If anything was leaking they would solder it up. They would also bend the fins straight and paint to it to look factory new.

Working as a mechanic I left the skin from many a knuckle removing and installing these things. In the Central Valley of California radiator fins were always plugged with dirt, twigs, and bug guts.

FWIW, sometimes a pressure washer can help get the junk out. Just don't get too aggressive.
M

I wonder if installing some fiberglass window screen mesh would spare those radiator fins from getting jammed and disfigured by debris and gravel. I use to put fix a 2-ply layer of the stuck on my ICE vehicles around the air intake snorkel. It prevented larger debris from getting to the air filter.

I wouldn't put anything in front of the center radiator as it's going to slow down the airflow. Maybe on a road trip where you go fast it's OK, but not for normal driving.
2

David99 said:
280k miles. 2014 Model S. Lot of road trips so the many many hours of high speed driving probably contributed to the radiator being so beat.
Click to expand...

There is a tool to straighten out your radiator fins. Its called a "Radiator Fin Comb" You can get them on Amazon for less than $15.