Based on current rates of range improvement (should be able to make a chart showing historic range against time), at what month/year should we see the following range from the MS? Assumes improvement will be linear with no major advancements in technology giving substantially better range. 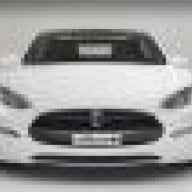 Not possible to answer to this question IMO. In fact the development of batteries has not a linear behaviour.
•••

It won't happen without technological improvements, the basic assumption of linear development to reach those distances is highly improbable. Short to medium term there will be improvements in energy storage density but basic calculations of energy/weight vs cost mean that there is a declining payback for every extra lb of battery weight.

P.S. This is why the often suggested idea of towing an additional battery pack makes no sense with current technology.
•••
I

ItsNotAboutTheMoney said:
Launching the 90, Tesla said 5% increase per year, which is lower than the oft-quoted 8%.
Click to expand...

I doubt EVs will ever have the 8% increase per year because EV batteries have to be much more stable than the AA batteries at the grocery store.
•••
E

Just out of curiosity, why would you realistically need much more than 500km anyway.
•••

Enadler said:
Just out of curiosity, why would you realistically need much more than 500km anyway.
Click to expand...

Because Tesla refuses to put Superchargers in certain areas, like Saskatchewan.
•••
M

Never. There isn't an ICE car made with a 2000km range despite the fact that building one would be trivially easy.

mgboyes said:
Never. There isn't an ICE car made with a 2000km range despite the fact that building one would be trivially easy.

There is no market for such a car.
Click to expand...

While in general I agree, there is a big difference: ICE cars can be refueled in minutes. Since they can be refueled quickly, there's no need for larger tanks--it's not a big deal (compared to an hour-long Supercharge) to stop for a few minutes and refuel every few hundred miles.

The eventual goal with EVs is to get as close as you can to eliminating waiting for a charge during long range EV travel. There are 4 options for doing this:

1. Recharge in the order of minutes. In this scenario, the existing 85 kWh battery is enough--stopping for a 2 minute super-super-supercharge isn't a big deal every 230-250 miles. Unfortunately, to recharge the existing 85 kWh battery in 2 minutes would require over 2.5 MW of power! (And that assumes 100% charging efficiency!) Not going to happen.

2. Perform a Battery Swap. With a battery swap, you really wouldn't need anything larger than an 85 kWh battery either. But this has its own challenges: You need expensive infrastructure to support it, and people can lose "ownership" of their packs--at a minimum for a little bit of time. People tend to be a little uncomfortable with this. Plus you've got rent, upkeep of the equipment and facility, etc...it isn't the most efficient option. Can you imagine the cost to roll out a $1M+ battery swap station (or several) where every Supercharger is located?!

3. Very large capacity battery packs. This is possible if there's a huge breakthrough that leads to very high energy density by volume and weight, and at very low cost per kWh. I would see this plateauing at the most a typical person would attempt to drive in a day, about 800 miles. Then the car could charge overnight (while the driver himself is charging overnight). While this is possible, such capacity is quite a ways off. And to allow "team" driving where one driver sleeps while the other drives, you'd want a larger battery than this even.

4. This option is in my mind the holy grail: charging while you drive. If a wireless charging system is incorporated into roadways, cars could be recharged while they drive. This could mean that you could eliminate the battery or shrink it significantly, in favor of a very large Supercapacitor with a much smaller range. This would be lightweight, support millions of charge cycles, be safer in collisions, and allow for extremely high power output (making ludicrous mode look slow in comparison). More importantly, for most drives it could charge at relatively low power (20-40 kW, which is about how much you use on a steady highway drive). The disadvantage of course is that it would require a worldwide infrastructure rollout, which would be expensive (but certainly worth it in the long run, assuming all cars were EVs).


The big question is, how will the future evolve? I think what we'll see is the following: For the next 20 years or so, we'll see capacity increase (option 3), weight and volume decrease, cycle life improve, and pack shelf life improve. So one might go 500 miles on a charge, then Supercharge at, say, 250 kW for about an hour. With this larger range, pack swapping (option 2) seems more feasible--but I think in 20 years wireless charging will get to the point where governments will start to install stretches of roadway that recharge your car while you drive on it. Then, the coverage of these "roadway charging regions" will increase over time, and from then on capacity will be tapered down because stored energy in large quantities isn't needed if you can recharge while you drive. (Can you imagine the acceleration of the Model S if you dropped about 500 lbs in battery pack weight while simultaneously quadrupling the power output to the motor?!?!! 0-60 in 1.5 seconds anyone?

That's how I see the future anyway.

But to stay on topic, I'm going to assume that ItsNotAboutTheMoney answered the OP's question already .
•••

Not for quite a while. Manufacturers will use the majority of the improvement to realize cost savings (smaller/lighter/cheaper battery) rather than increasing range.
•••

Wait until we have a clean nuclear powered car
•••

Just out of curiosity I applied for a trade in quote....