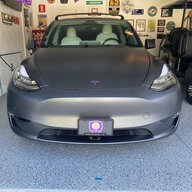 I haven’t seen a new thread on this and I have some comments and questions. Firstly, I’m pretty sure I used to be able to turn on the rear defroster from my phone app for my M3 and my wife’s MY. I no longer see where to do that since a recent update and wonder is this option now gone? The icon over the rear windshield to turn on the rear defroster is gone from the app. Does preheating on HI automatically turn on rear defrosters now too, hence why that additional step is gone? There’s no update on this in the owners manual.

Also, driving this morning the AP said it was suddenly unavailable and disconnected. A message appeared that the forward cameras are blocked. I turned off into a rest area and looked that the cameras to see inside the glass had a lot of condensation on the inside. It was actually the first time in noticed the heating elements around the 3 forward cameras. Not knowing exactly how to turn them on, I turned on the rear defroster electric elements, assuming maybe they are on the same circuit. It appeared to clear the front cameras instantly, but there is a chance it’s a coincidence? I didn’t change the AC setting or turn on the forward windshield defrost (red) / defog(blue). Anyone know if turning on the rear electric defrosters actually turn on the front camera defrosters too? It’s seems that’s what happened to me.

Confused as ever! Thanks for the knowledge gang.

iansherwood74 said:
Firstly, I’m pretty sure I used to be able to turn on the rear defroster from my phone app for my M3 and my wife’s MY.
Click to expand...

On the climate menu, drag the menu up and you will see "DEFROST CAR" as a choice there.

I havent clicked it so I dont know what it actually turns on (both front and rear, front only, rear only?) but the name suggests that it turns on both.

I dont know about defrosting inside where the cameras are.
•••
G

Just use the defroster. There are defroster lines in there as shown in the picture. The heat will make the moisture go away.
•••