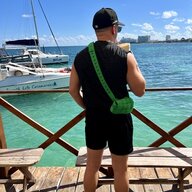 I am selling this bumper, AS IS. I purchased it used, but upon taking it to a friend he didn’t think they’d be able to fix the warping to an extent they’d be willing to stand by. Issues: minor spider cracking, right side mounting hole blowout (fixable, but needs to be done) and the mentioned warping. Some scrape damage on bottom, but that’s irrelevant because you’d have to get this painted/fixed anyways. It’s hard to show via photos, but I’ve attached what I have. Everything was fixable without issue for my body shop, it’s the warping that has lead to me wanting to sell. But, someone out there might want the project or not care about the warping for a track car.

Again, this will be sold AS IS. I will not accepting any returns due to the description.

I am selling within 7 days or trashing, so don’t sleep.

I am in Philadelphia. I prefer local pick up so you can see bumper, but willing to ship if you cover shipment costs. The white marker on bumper is removable, it’s just to emphasize the areas where the warping was.

damn wish i was closer. I'd love to have it for my track car. It's black too
•••

mprat1985 said:
damn wish i was closer. I'd love to have it for my track car. It's black too
Click to expand...

Willing to ship at your cost. Greyhound provided the best quotes.
•••