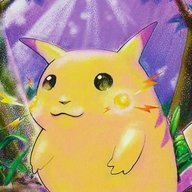 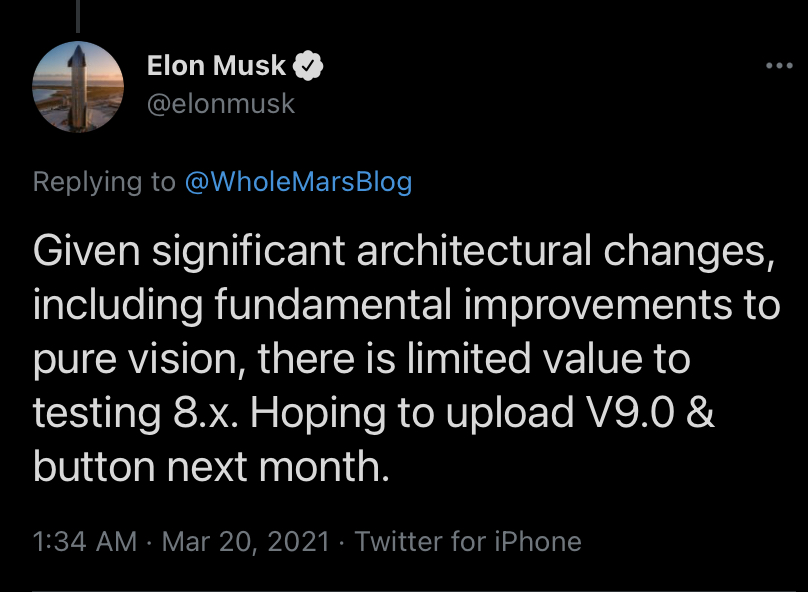 Elon and Karpathy have mentioned various fundamental changes to FSD over the past 18 months:


The fundamental rewrite of FSD is turning out to be a slower and more incremental process than it first seems to me. Still, I hope with v9.0 we start to see the performance impacts of these fundamental changes that have been discussed since November 2019.

Software projects are always behind schedule and always seem to be just around the corner — and then when you turn the corner, you see another corner. But behind THAT corner, the finish line is there for sure... Of course, former employees have (perhaps tongue-in-cheek) described Elon's estimation of software development timelines as the amount of time required to physically type the lines of code, so his perpetual overoptimism doesn't help a situation already beset by mirages of completion.

Yet delays are temporary and success is forever. The long-term global economic and humanitarian effects of pushing NNs to superhuman performance on driving-relevant perception and planning tasks is intimidating to even attempt to calculate. The ideas and provisional results that Elon, Karpathy, et al. have discussed, especially when cross-referencing them with academic research and industry research and engineering, seem incredibly promising. To me, they carry a genuine hope of escaping indefinite stagnation in autonomous driving progress and unlocking step change or exponential improvements in key performance metrics.

shrineofchance said:
...Yet delays are temporary and success is forever...
Click to expand...

Owners have been patient long enough since 2016 for paying for City Streets without getting it so after taunting that you can see it on Youtube so the price will be raised to $10,000 so any delay needs to be justified.

The justification is the "limited value" according to Tesla but owners are the ones who paid for City Streets, so owners should be the ones to decide whether it's valuable enough to pre-pay for it in the first place.
Reactions: daktari and Superendo
•••
A

Yes. I think more than anything it’s the sales aspect of it that drives us insane. Did I really want to spend $8k right after buying a $50k+ vehicle when I took delivery of my Model Y late October, no, no I did not. However, Elon successfully “scared” me into it with the $10k price AND with the early YouTube videos of FSDBeta and the knowledge that by December new features would be rolling out fleet wide (even if they were heavily beta.) Well here we are five months later and we’re told they’ll probably show up next month.

If Elon warned about a price increase 48 hours after new features are released and pushed fleet wide, I think people would be much more accepting of his horrible time lines.

You can say that software is always delayed, but many companies have a much smoother interaction with comments to the public and releases. Look at Apple for one; sure they’ve missed a couple big hardware/software releases but on the whole their fairly good about setting expectations and delivering the releases. Some might argue they’ve honed the skill so much that some of the surprise and excitement has disappeared from it; they announce something, they deliver, no more no less.

I truly get the feeling that Elon either got a demo from his software team of early testing of a new release candidate and before consulting with them about a time lane just ran right to Twitter and announced it was going “next month and is going to be awesome!”

Or, and I think this is actually more likely, he’s been seeing buzz about competitors and their self driving releases and isn’t happy how close they are to Tesla. I still believe Tesla is ahead, and will remain ahead. Super cruise is offering a lot of what Tesla is able to do currently AND with a hands off the wheel approach. That must absolutely drive Musk insane, especially if he see’s any of the bloggers/YouTube guys commenting you have to touch the wheel every ~20 seconds or something because of the nag. That little thing, hands off wheel, is blowing up to be a “huge win” to the over guy vs the Tesla system. It’s likely not an easy fix for Musk right now, so what can he do, leap frog over them and have a city streets self driving feature that they can’t even begin to compete with. What do you do if that isn’t something you can release right now? Hype it up. Encourage the most vocal social media people to post about it, so much so that you reward the loudest ones by hand picking them to get the feature pushed to them. Then you make splashy comments that whoever wants it can ask and get it. Then “everyone gets it!” “YOU GET FSDBETA AND YOU GET FSDBETA!”

I’m sure he hopes every time that he can deliver on his wild comments, but more than anything I think he has this absolute need to be way ahead of the other guys and CAN NOT fall behind.
Reactions: Redbrick, mark95476 and Microterf
•••