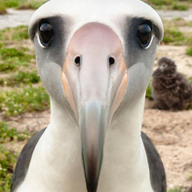 I've been having trouble with the grid contactor in my Gateway 2 cycling frequently and in a two hour call with Tesla and a tech from my installer today, the Tesla guy said something I haven't heard before. He said in Puerto Rico, Hawaii, California, Wyoming and several others I missed, the GW will retry right away when it sees a grid problem vs. waiting five minutes; I'm seeing about 20 seconds between tries. There must be some criteria in there like the grid being above a certain voltage, otherwise in a full outage they would be trying to power the grid.

Telsa think it is a PG&E grid stability issue; they are seeing voltage spikes. For now I've gone off grid, PG&E is supposed to hook up a power monitor tomorrow that will log for a few days so hopefully I can get an answer. Personally I think it is a GW hardware/firmware problem...

The “right” way to do it is to require 20 seconds of stable voltage and frequency, not just voltage within acceptable range. You end up with hysteresis problems. One minute is better than 20 seconds, but there might be a regulatory issue that forces it.
B

While it could be a Gateway/firmware (hardware?) issue, I wouldn't discount bad power. To me it sounds like either bad power or a loose connection, either in their equipment, or yours, causing glitches. Does it correlate at all with any big startups, e.g. AC, on your side?

In the past I dealt with a utility that denied having a power quality issue, but putting a massive ferroresonant autotransformer on our side solved the problem, and a later analysis showed truly garbled power, with lots of short power dips, and spikes. At the time, everything digital was dropping offline and rebooting, which was killing us (Nonresidential use). It took ages to get the utility to connect up a logging meter. After they did, and a week went by, if I hadn't gone though the results with the tech who installed it, all I would have gotten from the utility was, "yes, there may have been some minor issues, but nothing major", when in fact you couldn't point to a fifteen minute window of 60Hz 240V AC in the entire week. I guess "major" in their world was hour long outages. We also had a repeatable four second drop every Monday at 6am while they (manually?) switched something. We never got that one fixed, but it played havoc with some of our 24x7 systems until we found ways to support them.

The PG&E tech found the problem when he was removing the power monitor that he had installed a week earlier. He decided to pull the meter since he said he had seen problems with the contacts in the past and surprise... When PG&E inserted the meter the first time, the upper right blade didn't go in the panel jaws, it bent to the left and ran along the inside of the jaw (note that he was holding the meter upside down, so mentally roll the picture 180 deg, then it fits). It proceeded to arc at multiple locations, burning away a chunk of the steel spring clip on the outside of the jaw copper and also did some arcing to the copper and steel segments. The arcing apparently caused enough noise to confuse the PW so it would cycle on/off multiple times a minute. Once he put in a new meter all the backup events went away... Going to file a claim with PG&E, this was a brand new panel. 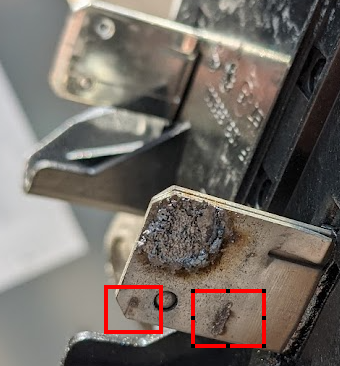 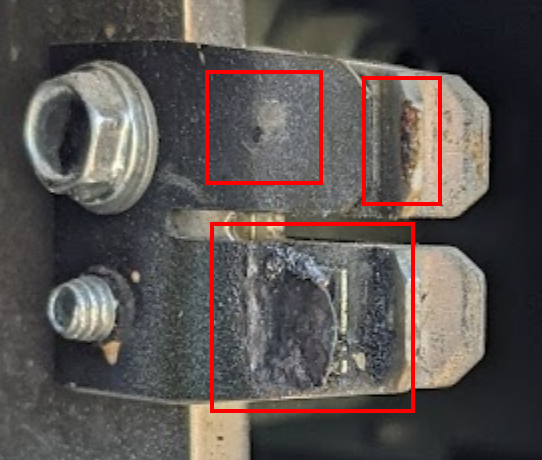 Interesting... Sunrun is allowing ESS to support the Grid during peak time