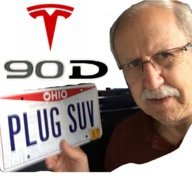 As soon as I got home with my MX a week ago, I went to do the garage door programming with our two doors. It did not work. My opener model is above and less than 2 years old. I played with this for hours and searched these forums for clues and tried a few.

Calling my delivery specialist, he remarked that they have experienced difficulty with the Genie brand products and sent me both the Genie and Homelink instructions which I had already found on their respective web sites. The problem (and solution) relates to how the Tesla "wizard" instructs you though via the touch screen, when all the "normal" cars have several buttons on their visors. Genie and Homelink tell you nothing about Tesla's interface and frankly that would be Tesla's job anyways because it is Tesla's software; and Genie is a very major brand product to expect people might have.

The missing information is that you (a) need a ladder to quickly get up to press buttons on the opener motor unit itself, (b) the Tesla will not react to your hand held remote (or do anything) without FIRST the program button on the Genie above you activated; (c) you do all this rapidly enough because the Genie will time out (d) you signal the Tesla from inside the frunk where it seems it is more sensitive to detect around the "T" emblem compared to the exterior. I found that doing this, got the needed headlight flash and next steps from the touchscreen. But (e) you must quickly press the same button on the opener motor unit during the next step of Tesla's sequence which "locks" in the signalling I believe both in the Tesla and the Genie system.

Despite having to initially signal Tesla sensors from the frunk, I can report no problems at all actually getting the door system to open and close once programmed, even while down towards the end of our driveway 30-50' away.

If you are having these troubles, I will try and help you. If I see a lot of need, I will repeat and write up the sequence with photos for all to use. Hopefully Tesla can get this into their resources to support their customers in the future.
•••
B

I know this is an old thread, but I'm facing the same problem with my Powermax 1200. If anyone has information how to get homelink hooked up to it, I'd really love to hear it!
•••

bittersweetyan said:
I know this is an old thread, but I'm facing the same problem with my Powermax 1200. If anyone has information how to get homelink hooked up to it, I'd really love to hear it!
Click to expand...

I explained above how to do this with the ordinary remote and opener. Have you tried this sequence? If so let me know what happened and I'll try and help. If I need to do my own over and make sure this is correct I will but won't until you try again. Once it worked, it has remained working on MX for about 9000 mile now since last August.
•••

Ok, I felt like playing with the car today, and cooked up these instructions. Enjoy! (Yes I changed my license plate because my wife liked the new one better)
•••

B
New Model S: a couple of questions re settings