Got a new X - question about the rear view camera.

This is my first post to the forum. After test driving a few SUVs, we got a new 7-seater Model X and so far I am absolutely thrilled with the drive even though we've had some issues. Coming from Japanese (Lexus) and German (BMW and Porsche), I think the "finish" quality is not quite there yet, but the car does deliver on performance. Here are some of the issues.
Since then the car has been driving perfectly. Last week though, I backed it into a pole by the road side early before dawn and caused a small dent. It was pre-dawn hours and I was backing up on a road without sidewalks. I must've touched the screen and it closed the rear view camera window. As I backed up slowly (< 5mph), the pole hit the car and caused a small dent and a scrape. The sensors did not pick up the pole because it was thin and the sensors cannot detect thin poles (or other obstacles).

The Tesla’s rear camera have always behaved this way. If you accidentally turn it off, just turn the camera back on from the applications menu.
••• 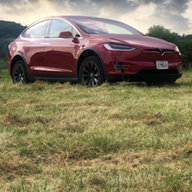 I agree with you; the camera should automatically appear when the X shifts into reverse. Perhaps this could be addressed in a future software update?

Ourselves, we're very conscious of making sure the camera is onscreen before we back up. The one and only time I scuffed our X, the camera had crashed to a black screen and I didn't reboot the MCU before I backed into a steel garbage can that I couldn't see in the mirrors. Ouch.

For everyday driving, we've got the display always showing the camera (in the center) and music (on the bottom). This way the camera screen is higher in the display and more in the line-of-sight.
•••
M

Are you saying once you dismiss the camera in reverse the next time you go in reverse it doesn't pop up again?

We'll have to wait for the AP4 computer for the camera to detect objects.
•••
M

NewFavThing said:
The camera won't pop up once dismissed no matter what gear you're in. If the camera is not displayed, you'll have to manually go into the applications menu at the bottom left of the display and press the camera icon to get it to display again. Once the camera is displayed, it stays displayed, unless dismissed.

We'll have to wait for the AP4 computer for the camera to detect objects.
Click to expand...

Once you bring the camera back up, while in reverse, does it go back to be automatic.

I think I've done every combo and it pops up normal now. Kind of afraid to check it now. But I swear I've dismissed it in reverse.
•••
K

Thanks a lot for all your responses. I appreciate it very much. So yes, the issue is that if the camera is dismissed while the car is in reverse gear, then if the car starts moving (backwards), it does not come back on. I personally feel that this is a safety issue and needs to be addressed by the software team. I don't think it would be a big change for them to implement and especially if it addresses a safety concern, it should be implemented. Do you folks know if there is a way to ask Tesla SW team for a "feature upgrade"? Thank you again in advance.

Australia Today at 3:32 AM
Flatbat