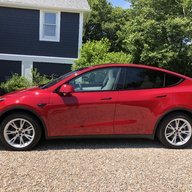 I had an issue with my MY after the last software download last weekend. The backup cameras stopped working and without cameras, you have no automation or even cruise control. I set up an appointment from the app and was scheduled for service Thursday morning. My concern was that I was leaving for a 1400 mile drive to Florida on Friday. If the issue was anything more than software, my trip was going to be impacted.

The regional software techs started-debugging the issue on line on Monday and after a reload of the software, little progress as made. As I shared my concern regarding my trip George from Tesla Warwick, RI hopped on the text message chain and found a slot in the schedule on Tuesday to continue diagnosing the issue.

Between getting a jump on the appointment, determining it was a main logic board failure, sending a tech to New Hampshire to pick up the part, and getting it installed and tested, I had my car back before my original scheduled appointment was to occur. George saved my timely departure. We often hear about the failures of Tesla service but in all of my years of owning BMWs, Lexus, Audi & Mercedes, I have never had over the air support and a service team stepping up to get a part picked up to maintain my scheduled departure. Thank you Tesla, George, and your great team at Warwick RI.
Reactions: MichaelP90DL and Picasso
C

Good story...good brake from all of the negative service stories.

I wonder if a lot of there service issues are related to how fast they are going. Hopefully they can grow there service centers and improve their customer service before they create a bad reputation that will be hard to reverse.