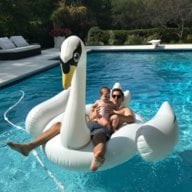 I took home delivery of my Model 3 late at night, late in September, and so I didn't really get a chance to inspect the fit and finish as closely as I would have liked. The next morning I walked around the car checking for panel gaps and other issues and noticed that the driver side headlight appeared to be protruding out ever so slightly along the bottom of the headlight housing whereas the passenger side was perfectly flushed with the bumper.

The only other minor issue I noticed was some loose adhesive where the passenger side mirror connects to the door frame, otherwise the car looked mostly flawless to me. I went ahead and made an appointment for the service center and finally got in this past week.

When I picked up my car I was told that the headlights should actually protrude out slightly and it was the passenger side headlight that was wrong, despite being perfectly flush. According to the service center rep, the on-site technicians have previously confirmed this with engineering back at the mothership. The slight bottom lip in the headlights causes the air flow to break up and be directed around to the side of the car and under the side mirrors, cutting down significantly on road noise. The fix was a slight adjustment to the bumper to make it a bit more even so each headlight now had an equal, but slight overhang. I guess this makes sense... less air coming over the headlight and straight into the windshield / over top the car. Of course now I think it does actually sound quieter above 70-75 mph when I would usually notice road noise, but who knows...? Could all be in my head!

Anyways, just thought I'd share as I was curious if anyone else has been told something similar.
Reactions: skrtskrt, e-FTW, Stirfelt and 2 others

Model 3 Tuesday at 7:54 AM
westernvine

A
I got my car yesterday, initial thoughts...