A heads up that Tesla Brooklands/Weybridge appears to be no longer offered as a service centre appointment.

This doesn't come as a complete surprise as a couple of years back, a reliable source said that the new 'Guildford' service centre will be the new service centre and that Brooklands will be used as a premium centre for Roadster (old and future). Plans may have changed though as nothing shows on the map at Brooklands any more.

Unfortunately not as convenient to us as Brooklands (I'm often in that area) but on a positive, there seemed to be a much better selection of available dates than there were in the early days of Model 3.

Hopefully the road between A3 and the Astolat Business Park is not too congested in the mornings - I only know the road north of A3. But much better than getting to Heathrow where we first had to use!
Reactions: CMc1
••• 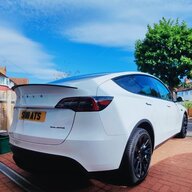 It seems we're in the same neck of the woods. Brooklands was only a short burst along the A3 for me, but Guildford is defo further. I might opt to go to Heathrow (the service I received there was better than Brooklands, but Brooklands was convenient).

Thanks for the heads up
Reactions: Erol
•••

Pleasantly surprised by how quick Tesla have checked (and added to *) the list of service items. In the past, its been left to the day before and on several occasions ended up with the work being postponed due to lack of parts.

I recently used the new 'Guildford' service centre. At face value (didn't get past the desk at the front door) its much improved facilities over Brooklands/Weybridge as it is a full showroom.

Nice and easy to find, although not quite the mental picture of the site that I had. The entrance to Astolat way is off a roundabout with a petrol station/Skoda car showroom on one side and a residential home on the other. Its certainly not Guildford though, which for us is a plus as Guildford is a right mare when it gets busy, as we encountered returning from the London side of A3. Our normal route should be fairly straight forward though, with normal Hogs Back caveats.

Unlike Brooklands/Weybridge it was all rather impersonal, albeit friendly. I didn't notice any faces from Brooklands. Thankfully someone did ask to help us otherwise I think we would have been stumped by the 'scan the QR code' sign and otherwise being ignored. It wasn't clear that the QR code seemed to be the only check-in and the staff at the desk were not there to otherwise assist. Other communication was via text, including letting them no some detail change which could have been handled in person.

Based upon previous service centre experience, I had expected the car to require some parts that would need ordering and the car to be kept overnight or two, three, etc... But they seemed to have most of the parts and the one they didn't they booked the car in for a week or so after. In Tesla style, notice to pickup all rather last minute but thankfully we were in a position where we could change our plans and collect - would have been a frustratingly different story 5 minutes later. Unlike Brooklands, it looks like after hours collection will be possible (at least for the time being) which is a potential great help. Apart from check-in procedure uncertainty, it looks like it may be possible to do after hours drop-off.

Apart from the impersonal feel (which having encountered once will prepare us for next time), the other criticism is that the drop-off spaces are all rather tight so consider staggering your car to allow doors to be opened. Pickup spaces much wider.

No sign of any superchargers, but certainly an obvious space for a few - hopefully not the dropoff spaces though!
Reactions: Erol
•••

Delivery or Service Centre for Collection?

Service Appointments via the App

The UK and Ireland Yesterday at 4:44 PM
Irata
I