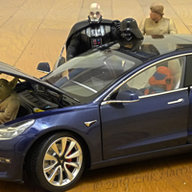 I've been active on various Tesla FB groups for a couple years, and I've often referenced posts here, but I finally joined..

I'm a Model 3 owner in Northern Virginia. I've been interested in Tesla since the Roadster was released, but I couldn't convince myself that any car was worth $80K or more to me, so I didn't seriously consider buying a Tesla until the Model 3 was announced. I placed my reservation toward the end of that opening weekend in the beginning of April 2016, and I've been happily driving my Model 3 since July 2018 (LR RWD... the only Model 3 at the time)

I've attached a picture I took along with a bunch of mini-Model 3. 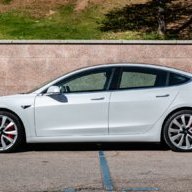 Welcome to the club!
Reactions: Akikiki

Hi! Finally joined TMC...
Good, we've been waiting on ya.

Welcome to the forums !!
Reactions: Akikiki

Thank you all for the warm welcome!
Reactions: Akikiki

The UK and Ireland Yesterday at 2:20 PM
Envchem