Homelink triggered halfway inside the garage

I have a pretty regular house with a pretty regular ~40' driveway and Homelink has been working flawlessly for months. It is set for 100' and nothing has ever changed, nor have I received any recent software updates (2021.4.18.2).

Every time I back out of the garage the Homelink triggers exactly at the location shown, which is only 60' away, not 100' but that's fine. It's actually perfect because I can see the door start closing as I switch to D and turn down the road. Upon return it triggers a little further away, though perhaps still not 100'. 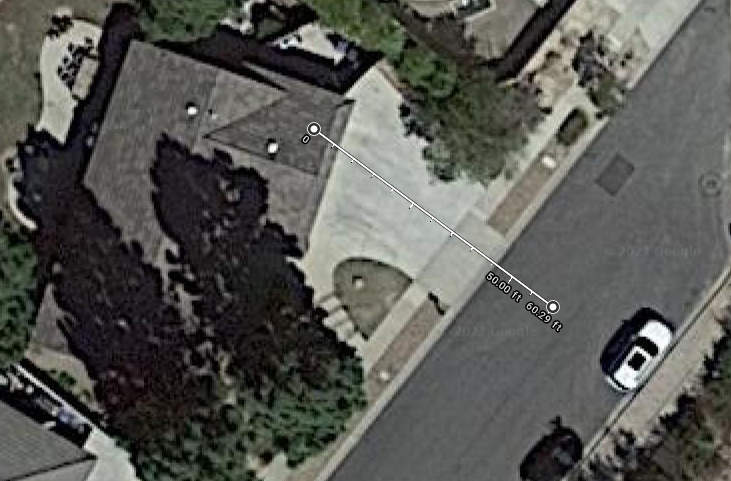 Today I washed the car in the driveway as usual then pulled it back into the garage and just as I was almost all the way in, it triggered and closed the door behind me as I was still rolling in. I didn't have much further to go so I did make it in ok but if I had been distracted or slow it could have hit the car. It's not easy to figure all this out and find/press the manual Homelink button to reverse the door in a panic, nor is it easy to drive quickly into my garage so I'm grateful that neither was needed this time.

I don't see a way to view the current home location setting and surely I could just blindly reset it and hope this doesn't reoccur but I suspect the problem may actually be a fundamental flaw in the software logic. I think what happened is that the GPS signal was degraded by my garage roof and the position estimate was momentarily inaccurate by more than 100'.

There is a timeout logic that prevents the door from being triggered more than once every XX seconds and this is probably why I've never seen this happen before. Tesla probably figured that would be good enough and therefore didn't bother to add any logic to the GPS estimate that would see that the signal is weak and the car's wheels and accelerometers are in disagreement with GPS, opting to alert the driver of a skipped Homelink event rather than just triggering it anyway on junk data.

Of course the root of the problem is that Homelink is just a crap company exploiting their monopoly to the fullest by continuing to sell the same dumb opener system they have since the 1960's but hopefully Tesla and others will soon provide a workaround.

TLDR: Be careful when moving a parked/sleeping car into the garage as it may trigger Homelink part-way inside the garage rather than in the usual spot.

Gauss Guzzler said:
...same dumb opener system they have since the 1960's but hopefully Tesla and others will soon provide a workaround....
Click to expand...

Can you just move up your garage door sensors higher to the bumper's level so the door won't crush your car? If they are set too low to detect the bumpers, the door just thinks your car is not already partially in.

L
Homelink and backing into a driveway

HomeLink auto close does not work