How will devalued Yuan affect Tesla?

Recent steep devaluation of the Chinese Yuan will certainly affect Tesla sales in that country. How will that impact Tesla Motors?
••• 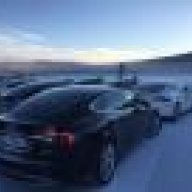 I'm not sure the specifics but it has a negative impact on Tesla sales in China. Just another country losing value compared to the dollar. Tesla just raised prices 5% in Europe because of a similar situation.
•••
B

Prices for Chinese parts going to Tesla in Fremont (if any) go down if priced in Yuan.

Cars going to China will bring in less money to Tesla unless they raise the price in China (ie. ForEx - Foreign Exchange).

If selling for 700,000 Yuan, they need to raise it to 728,000 (4% increase) or some such change to balance the ForEx. Price of cars just went up in canada 7% due to their large exchange fluctuation this year.

Whenever a currency exchange goes down in the foreign country, selling to that country is harder for an American exporter.

One benefit, to China, is that selling their goods to other countries becomes easier since their price-paid is less. Walmart can buy "stuff" cheaper from China, for instance. And we all know almost anything we buy at stores lately has "made in China" stickers or labels on boxes. So, our benefit is if Walmart or others passes the savings on to us (and that sometimes is not done) - then our prices can be slightly better. Usually, a company will not do that because turning a higher profit for shareholders is what management wants to do rather than lower a consumer's price.

For years, financial firms and governments have said China kept the Yuan synthetically low in value. However what was expected was an eventual allowance of letting the Yuan rise in value - here this is the opposite of what was expected and actually brings "export strength" to China making them stronger as an exporter while causing some local inflation for its people. If the USA wants to become stronger as an exporter and similarly, bring more money into the country, two things could be done. First, devalue the USD by 5% and then also allow crude oil to be exported. By doing this, economically the country could become stronger but raise prices at Walmart and other places where the marginalized consumer shops thus making life harder for a majority of people. Exporting oil and more finished goods also could raise gasoline prices as well. The danger of lowering a country's currency puts pressure on the lower-class through inflation while making the manufacturer companies and wealthy investors some extra money. A stronger currency helps retailers who import more and sell to the lower class volumes of cheap goods and it keeps fuel prices lower.
Last edited: Aug 16, 2015
•••
N

Well, I'm now not assuming any significant Chinese sales when I'm doing my projections for Tesla. So I think that's what it means.
•••

neroden said:
Well, I'm now not assuming any significant Chinese sales when I'm doing my projections for Tesla. So I think that's what it means.
Click to expand...

And how significant is that to Tesla if Chinese sales tank?
•••

Tesla stock - how low will it go?

How the June 2022 layoffs affect service

R
Suggestion: How Tesla could implement Vehicle to Load