If you have tapping noises from the back....

I've been following the forums for a while now and am aware of some people having a hard time finding popping/tapping noises coming from the rear of their car. There seem to be many root causes for the noise, so I'm not proposing that the following is the one-and-only cause. But I do think my issue was pretty obscure, and now I fully understand why the noise happens and how to prevent it. If you have an unresolved noise issue coming from "somewhere" in the back of the car, maybe this is a way to fix it yourself. You might even fix a panel gap issue, and a hard-to-close/latch trunk issue in the process!

The noise sounded like it was coming from behind the rear seats, and the it sounded like something tapping on the chassis of the car. I thought maybe it was a loose cable somewhere so I ripped out all the soft panels in the trunk to locate it. No luck. I checked the seatbelts in the rear seats, my child car seat straps, and the latches for the fold-down mechanism. Wasn't that.

I took the car to the service center and they found the root cause. I first posted about it in this thread. tl;dr - there is a screw that was tapping the folding arm mechanism of the trunk. When the car went over bumps, the trunk lid would shift, causing the tapping. SC put some dampener material on top of the screw head and the issue went away. 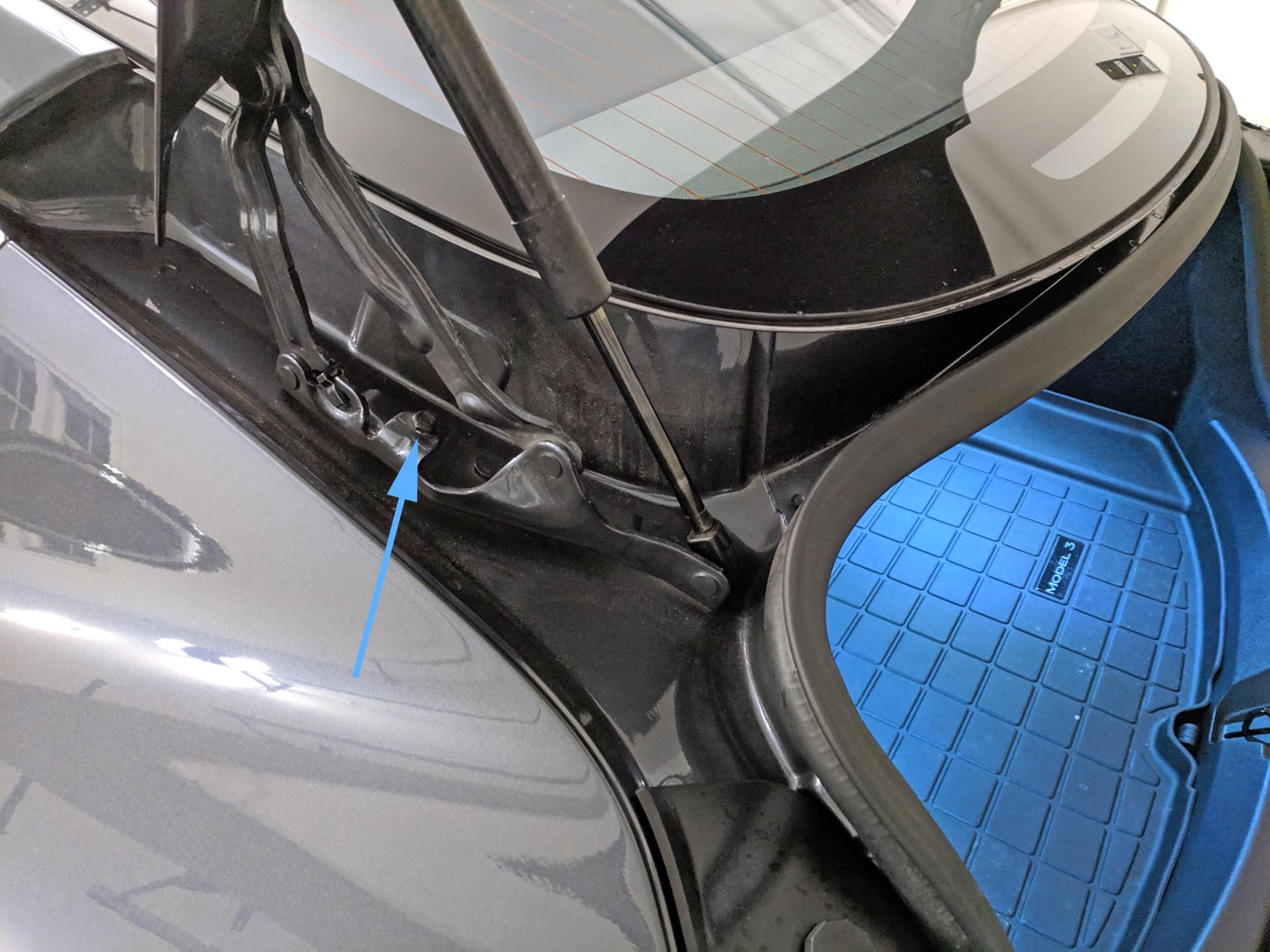 But last week, I noticed the sound coming back again. I checked the screw and sure enough, the dampening material was wearing down. Since the tapping was only happening on the driver's side, I took a hard look at the passenger side to see what the difference was.

Turns out, the screw is raised a bit more on the passenger side than the driver side. The screw also isn't holding anything down. It looked like it was intended to be an adjustment screw to adjust the panel gap of the arm part of the trunk lid. Interestingly, my screws are entirely encapsulated with paint and clear coat, which means these screws were adjusted before painting. When I closed my trunk lid, I now noticed that the panel gap for the driver-side trunk arm was very narrow, while on the other side, the gap was consistent with the rest of the car.

This meant that the problem screw was too low, and with the trunk closed, it wasn't coming in contact with the folding mechanism. And slight bumps while driving would bridge that gap and cause the tapping noise. So I raised the screw (you'll need a 10mm socket) a couple turns and closed the trunk. I noticed that this increased the panel gap quite a bit to a more proper gap. It also indicated that now the screw was definitely in contact with the folding mechanism when the trunk was closed. I did some more fine adjustments until the panel gap was desirable.

Note that if you raise the screw too much, the trunk becomes too hard to shut, which is yet another issue reported by people. So the key is to adjust the screw so that it's always in contact with the folding mechanism when the trunk is closed, but not so high that it makes latching the trunk a challenge.

I hope this helps someone. The dampening material on top of the screw head is just a band-aid; it doesn't address the root cause, which is that when the trunk is closed, there should not be a gap between the screw and the folding mechanism.
Reactions: fabian, SammichLover and SoCalMom

Do you have a video of this sound? I have a sound coming from the rear and can’t find the cause.

Because it was being locked in place with paint and clear coat before, would it now be at risk for vibrating up or down with time? Or did you apply a bit of Loctite or something like that to help keep it in place?

SammichLover said:
Because it was being locked in place with paint and clear coat before, would it now be at risk for vibrating up or down with time? Or did you apply a bit of Loctite or something like that to help keep it in place?
Click to expand...

screw is still pretty tight. I can't turn it by hand. I may apply loctite if it gets loose.
Reactions: SammichLover