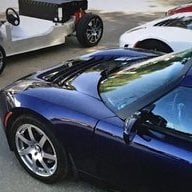 Does anyone know if Tesla could avoid China’s proposed increase in U.S. car exports by moving production of those vehicles to Holland, where they might only be subject to the 25% tariff that is paid today?
•••

Don't know if that counts as Made in Holland for Chinese customs. I guess Dutch authorities might lobby the Chinese for Tesla on the point.
•••

There seems to be some confusion of what China imposing 25% tariff means to imported cars to China such as Tesla.

China has already imposed 25% Tariff on imported cars such as what Tesla has experienced since the start of its first sales in 2014 to China.

Some people speculate that it means there is no further increased tariff for Tesla which will not adversely affect Tesla more than what the practice has been already.

However, many news outlets think otherwise. They interpret this as another additional 25% tariff on top of the current 25% tariff.

"The U.S. car maker is already hindered by China’s current 25 percent import tax that catapults the sticker prices of Model S sedans and Model X crossovers beyond the means of most consumers. An additional duty would further relegate Tesla into a niche marque only afforded by the most wealthy."

"...the 25% existing import tax on Tesla vehicles manufactured in California and exported to the gigantic and growing Chinese market will get hit with another 25%."

On the other hand, since other big American car companies such as GM, Ford... have partnered with China so they are considered domestic China cars (for those coming out of China factories) and have not been subject to existing tariff or future ones.
Last edited: Apr 6, 2018
•••

Yes, but the upside when it is all over is that Tesla may be able to own it's factory in China outright instead of 50%.
•••

jackbowers said:
Does anyone know if Tesla could avoid China’s proposed increase in U.S. car exports by moving production of those vehicles to Holland, where they might only be subject to the 25% tariff that is paid today?
Click to expand...

Unless Holland has some separate trade deals with China, Holland is still under the EU and it has been under China 25% car tariff as well.

If future tariff war is directed at the U.S. only and not the EU then it may be worth it to start producing Tesla in the EU such as Holland to avoid additional U.S.-China tariff war.
Last edited: Apr 6, 2018
•••