Took my first long road trip today in my new Model Y (July 2021 build) and everything was great except the air conditioning.

It seemed inconsistent. Sometimes plenty cool, even too cold, and then 30 minutes later I find the car is hot and stuffy. When this happens there seems to be low air flow and the supply vent air temp is warmer, then after another 15 mis or so it starts cooling down again. This happened several times over the 250 mile trip. For the most part I just ran the system on Auto with temp set at 72F. I can't understand why there is such a large variation in temperature in the car. Doesn't seem right. Skies were overcast all day so was not related to sun heat load.

I have noticed this once or twice on previous drives as well.

I plan to contact Tesla but was wondering if any others have experienced this.
J

Oh no! I hope this is not the explanation for what I am experiencing. It would be really disappointing to think the climate control is supposed to work like this.
G

rjpjnk said:
Oh no! I hope this is not the explanation for what I am experiencing. It would be really disappointing to think the climate control is supposed to work like this.
Click to expand...

Did you try:
1. Mode set to Auto
2. Recirculate set to On (lit up)
3. Rear vents on (lower right button, lit)
4. Temp set to Lo (adjust after reaching comfort level. I live in AZ and use 68 or 69).
5. Are you moving at least 30 MPH at least to start cooling? If not most ACs will have trouble since there is no airflow.
R

Just to clarify, I don't notice the car has any problem cooling initially. It seems to reach the set temp (72-74) on Auto mode very well even in 90 degree heat. As good as any car I've driven. The problem is it doesn't stay at the set temp, but seems to turn off occasionally for 15 minutes or so and the cabin becomes noticeably warm fairly quickly, then it starts to cool again. When it is in the no-cool state no amount of adjustments I've tried can make it get cold again.

It really does seem like the AC has gone off to do something else (like cool the battery as jcanoe said), but I can't imagine the designers would be happy with just cutting out climate control like this. I am hoping it's a system defect that can be fixed. Maybe a temp sensor?
M

My ac is cool, consistent, and comfortable. It shouldn't work as the OP described.
Reactions: rjpjnk
V

I have the same problem with my Y. I was told by Tesla there is a software bug that’s causing the issue when your temperature is set between 72-74 degrees. i have been using 71 and lower without issues .
I hope that helps
Reactions: Big Earl, MyWhiteY, QuickSilver714 and 2 others
R

MY-Y said:
My ac is cool, consistent, and comfortable. It shouldn't work as the OP described.
Click to expand...

I am so happy to hear this. Thank you. So hopefully mine can be fixed.
May I ask what settings you typically use?
R

Vassilatos said:
I have the same problem with my Y. I was told by Tesla there is a software bug that’s causing the issue when your temperature is set between 72-74 degrees. i have been using 71 and lower without issues .
I hope that helps
Click to expand...

Wow! Seriously? a bug in that specific temp range? I will test this out today and see if 71 works long term. Can you forward any link to discussion of this SW bug please.
V

rjpjnk said:
Wow! Seriously? a bug in that specific temp range? I will test this out today and see if 71 works long term. Can you forward any link to discussion of this SW bug please.
Click to expand...

I don’t have a link or something in writing. It was a conversation with the service advisor that I have known since 2014 when I got my first S . The last 2 weeks I kept the temperature out of that specific range and I had no issues at all .
Reactions: rjpjnk
B

I find that the temp remains more consistent around 70/71 if I keep the AC on Auto. If I use the manual setting, I experience the same situation as the OP.

I thought that the A/C was kind of weak in my MY (June 2020 build) but figured that it was not as good in an EV. Had the sensors changed during a routine tire rotation and it made a HUGE difference.
Reactions: rjpjnk
S

I’ve seen similar issue with my new model y (US East, took delivery on 7/27). When AC is set to 72F on auto, it switches between cooling and heating…
Reactions: GOVA, mcsenerd and rjpjnk
R

shawn1x1 said:
I’ve seen similar issue with my new model y (US East, took delivery on 7/27). When AC is set to 72F on auto, it switches between cooling and heating…
Click to expand...

Took me half the summer to figure this out! Solved the warm cabin
R

Yep, you can turn the back seat supply vents as well to move even more air if you like. Would be nice if it stored the vent preferences in the profile.

It also seemed to be if the temp was say 71 outside and setting to 71 or so it didnt seem as cool, have to set to 69. 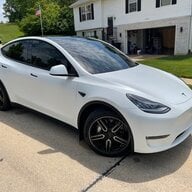 This actually makes sense. If I leave the temp set to 72 when I get home then preconditioning feels like it is heating in the morning. I usually have the ac on 71 all the time so I never have an issue with cooling. Every glass piece is tinted on my Y so there is no challenge to cool the interior. 105 degree day and the ac is running maybe 3 on the blower speed in auto.

Sorry guys, the information posted here is all wrong, this has been an issue with the Model Y since last year, there is lots of post on this issue if you searched for it, the info that guy above gave you about the Tesla has to decide that it needs the cooling for the battery while disabling the A/C is all wrong too.

And I like how that Service Advisor gave you that Lame Fix It all excuse that there is an Update that will fix it. This is what they always say to get you out of their face.

I had the same issue with the A/C and in San Diego being that it’s cooler it wasn’t an issue, the Issue came up when I hit 115 Degrees in Las Vegas last year. The only fix then was to do a 2 button re-boot and that would fix the A/C for a few minutes and then it would start to blow hot air again just like what the OP has stated.

We found here on this forum by experimenting that by setting the A/C to Manual and at 62 - 63 degrees with the Re-cycling air on, it would work, as soon as you put it on Low it would shut off and start to blow hot air again. A few of us here put that to the test. Then someone here actually called them out at the Service Center in Las Vegas when it was hot as hell and they finally did something and got it fixed, it took them 2 weeks to figure it out and as soon as that came out on here I went and submitted my service ticket and they installed the same component as this other person.

Since then I have been back to Las Vegas in 105 - 115 degree Temps many times and Drove 6478 miles across Arizona, Texas & Florida Key West this past May - June which were very hot days.

Not once did the A/C failed and it worked Perfect and kept the car at the exact temp I had it set too. In Florida, Texas and Arizona I would set the A/C from inside the hotel or restaurant so that it was ice cold when I came back.

Let me look for the invoice that shows the Parts that had to be replaced, on top of that they did the A/C or Heater Pump insulation cover retro-fit that didn’t come with the car, Plenty of post on that as well.

Hopefully will return with the invoice but If someone else has those parts please post them here. This was a nightmare of a problem that finally was resolved. May 2020 build.

Found it, this is what needs to be replaced to fix this problem. Fixed August 20th 2020. 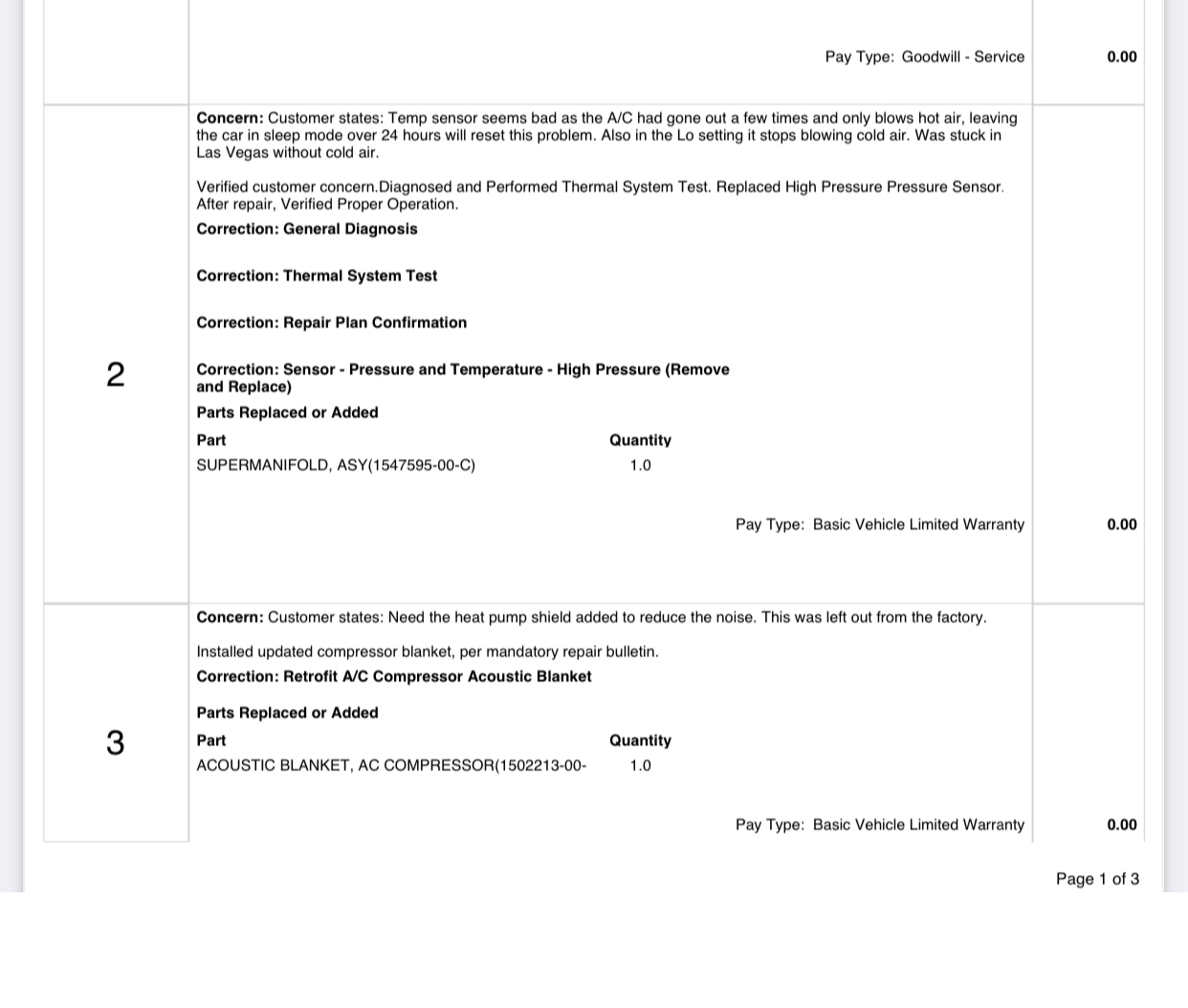 OP here. Tesla service just texted me to ask date and time it occurred. Are they going to read my car’s logs remotely? How can I best respond to them in order to get this fixed correctly?

Remote "Climate On" results in full blast heating to 81F