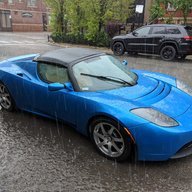 When I got my system installed last summer, I started experiencing brownouts on really hot days. This happens regardless of whether I have my AC in use - it isn't connected to the power I draw. When it happens the Powerwall/Solar systems shows as the grid going offline. All my electronics reboot due to the power fluxuation. The grid isn't actually offline (I have one car charger that isn't on backup and it works fine). About five minutes or so later it would try again - and either re-brown out or have the grid go back online. Sometimes this would repeat for hours - a brownout every five minutes.

Tesla came out to look at it and determined that the power I was getting from the utility was inconsistent - instead of being 120V on both wires it was 118 and 122 (fluctuating a bit). They said that the Powerwall system was taking itself off the grid to protect itself.

So, I got the utility out to look at it. Thankfully, they agreed with Tesla's assessment. They replaced the head at my house then the cable from the pole to the transformer. They also said that the cable from my house to the pole should be replaced as it was old and squirrel eaten but that was a different department's job (great). They also had someone put a monitor both on my house and at the transformer. Around this time it was autumn and there were no more hot days - they said the house looked fine and the transformer was only at 40% capacity, so no issues there.

This week we've had hot weather again, and, low and behold, I'm having issues again. This time, however, the Powerwall system disconnected once with a brownout and stayed offline for hours until the weather cooled down.

First, any idea why the change in behavior from the Powerwall? Did a firmware upgrade change how it reacts with inconsistent power? Is there any way to tell?
Second, any suggestions? I'll get the utility back out here, but it took 12 calls to them last time to get this far, so I'm not looking forward to another round. I imagine I'll need to convince them to replace the cable from the house to the pole (that other department still hasn't come by), but could the 40% utilization on the transformer during cool weather go over if everyone on it has their ACs on at the same time?
Third, is there a way to get logs from the system that would show me the specifics of the voltages at various times?