Went for my first big road trip since getting my AWD LR Y last June. Managed to drive 4,292 miles in 14 days. I learned a lot about the car, which I wanted to pass along to those slightly less insane than I am. The first part of the trip was from NH to MI to visit some family. I took the middle route via I-80 through PA. Although I start the trip at 95%, the rest of the charging was basically enough to get to the next super charger with roughly 10%. This actually worked really well as everyone got out every 1.5-2 hours and got to walk around for 10-15 minutes. As is well known, the charge rate is great from 15%-55%, after that it starts slowing down. Super charging above 75% is slow as the charge rate slows down to about 50kW or less. Instead of waiting 50-60 minutes at a super charger and then skipping a supercharger location, I chose to charge to whatever was needed to get to the next one which usually resulted in a roughly 10-15 minute stop, grabbing 25-35 kW and then getting back on the highway. According to my math, this was an advantage. Two 15 minute stops is better than one hour long stop.

Quick SC stops every 2 hours or so, helps prevent knee, leg, back issues. Allows for more backroom breaks as needed. The dogs seemed to like this as well.

FSD/AP (not the new beta, sw version 14.18) worked GREAT. It reacts somewhat more negative back home, but on a limited access highway, it worked very well. I had set Mad Max mode, meaning it could pass slower vehicles, if safe, without confirmation. Mad Max is a misleading name, as it is a very patient Max. It turns on the blinker, 5 seconds before it starts the lane change. You can cancel it by turning off the blinker. If there is a vehicle behind you after it makes the pass, it tries very hard to get back over to the previous lane to let them pass. On the limit access highways it made long trips very nice and easy, except for one case… (see below in the Cons). I could easily do 12-14 hour drives with AP. 16 hours is also doable. AP reduces the workload enough to make this possible. 18 or 20 hours is still a rough drive but I did 2 of them and AP really helped make it a safer trip.

The estimate of how much energy you’ll have at the next destination worked very well. It, of course, depends on what speed you drive, but it did a nice job. Usually I was able to arrive with slightly more energy than expected. I felt that 10% (roughly 30 miles) was enough to handle issues. I also usually do 4-7 mph above the speed limit.

The car ran flawlessly. Smooth, quiet, the tires (19” OEM) handled dry roads and the heavy downpours very well. This is a very nice car for a road trip.

You can tell AP to move over a lane by turning on a blinker. You have to use a hard blinker (continuous) until the lane change is complete and AP turns off the blinker. Using a short blinker (3 blinks) just tells AP to change lanes and then oops I changed my mind and AP reacts strongly to re-center you in the old lane. Not desirable.

Cars entering the limited access highways tend to freak FSD/AP out. Although it is designed for safety, it slows down (dramatically) which could lead to a rear end collision. The secret is for you to recognize this condition coming up and turn on the blinker to tell AP to move over 1 lane before the car comes near you.

Supercharging at V1 and V2 stations can be a bit painful. Since these are shared, having more than 50% of the stalls used means both shared drivers will suffer. There were several times where someone tried to park into a shared charger, but I suggested they move to an open charger for a better charging rate. I tried to explain it to them, but there were many that were unaware of this. In Springfield, MO, instead of 1A, 1B, 2A, 2B, … they were setup as 1A, 2A, 3A, 4A, 1B, 2B, 3B, 4B. I pulled into the SC and there was only 1 car charging in one of the middle stalls. I pulled into the end stall and plugged in. I noticed that my rate was only 65kW, instead of the expected 140 or so. That is when I noticed the different setup. They were in 4A and I had plugged into 4B. I quickly stopped and moved the car and plugged in again. This got me to the desired 140kW. I apologized for not realizing the different setup and the driver had no clue what I was talking about. Tried to educate them for the future. Met another driver who had just picked up his new (1.5 hour old) car. He was super charging for the first time and didn’t know how to pay for it. Yet another educational opportunity.

My left rear reflector fell off somewhere. At one stop, I noticed it was partly out and I put it back into place. Later, it was gone. Have to figure out how to replace it (and probably will use double sided tape).

Driving through OK and the radio had a weather warning about strong storms with 1-2” of rain per hour. I hit that storm. Most tractor trailers trucks just pulled over to the side and stopped. Although the speed limit was 80 and the minimum was 60, I was down to 40 during the worst of it. Yes, my flashers were on. The car handled this fine. Part of the way through, the GUI popped up a yellow warning saying “Poor weather detected.” I was like, No *#&%, Sherlock! I didn’t know that the GUI provided comic relief like that.

The Nav system does a fairly good job at getting you to the SC location. Sometimes you need to drive around the building to actually see the chargers. However, the one at Oklahoma City was WAY off. It announced I was arriving at my SC destination and I drove around the building twice without see it. It was located a half mile away at a nearby shopping center. I only found it by following another Tesla. Plus there were 8 stalls and all 8 were being used. So I was now 2nd in line. Took about 5 minutes before the first stall opened up and then another few minutes before I started charging. After plugging in and getting only 65kW rate, the system popped up saying this was a high use SC and you were limited to 80% (in order to increase the throughput and to allow more cars to charge).

Not enough geocaches near SC locations. While 10-15 minutes doesn’t give you a lot of time, it’d be nice to log a few caches at the same time.

I also slept in my Y. I have a nice twin air mattress which worked well. However, 6’1”, I drive with the seat all of the way back. Needed to move the seat forward a bit to fit comfortably and allow the legs to be straight. As it was cool that night, I vented the windows to save a bit of power instead of using dog/camp mode. Dog/Camp might have been better for more air circulation at a constant temp.
Reactions: Bgarel, fireball08, KenFTL and 20 others

Took a picture of the road trip damage, to try and get the part replaced.

Just joking. Thanks for a concise history of your road trip. I came to very similar conclusions about ABRP and built-in nav.
Reactions: txtabby and srlawren
C

This is great, thanks for the trip report. Just keep in mind the 80% is just a soft limit. You can move it to 90% if needed. And I concur on your cons, I have similar issues when driving down interestates.

Someone asked, so I thought I'd add this. 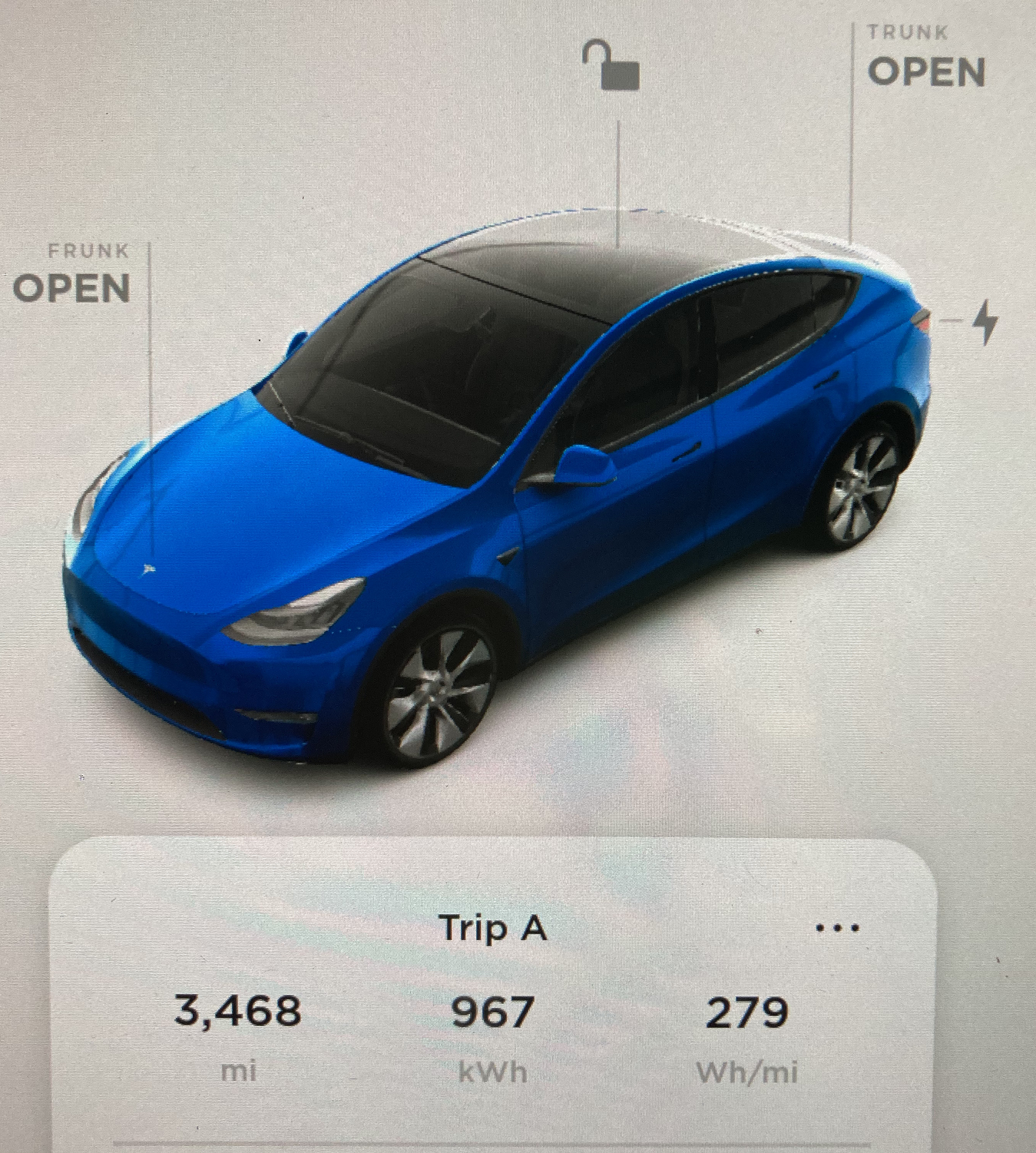 The last 150 miles were up and down hills at 50 mph or less. The Tesla is great on hills. Same speed up and down. Handles beautifully.
Reactions: Dennisis
L

Nice write-up. As more Telas are sold I fear the infrastructure will suffer a bit. Especially around weekends and holidays. I do not have FSD just AP and took my first road trip. I felt when the right line expanded or the road got wider why the system corrected to that line rather than stay on the left line, which makes more sense.
Reactions: cjxmtn, Hexo09 and GeezerSquid 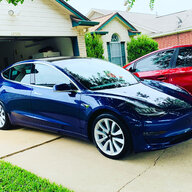 Puma2020 said:
Took a picture of the road trip damage, to try and get the part replaced.
View attachment 673307
Click to expand...