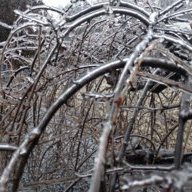 Most of the reason for this observed inefficiency, I think, is the constant level of vampire drain from the car's systems. So for example, if the car uses 500W constantly, that's a much bigger fraction of the 120V / 12A charging power than it is of the 240V / 40A charging power. So 120V charging is not just slow, but disproportionately slow.

From the practical standpoint of "how long will it take the car to charge?" I can understand calling this "inefficiency." But it really doesn't say anything about the energy-efficiency of the battery charging itself. It's just a constant, additional load detracting from the power available to charge.

Consider the following thought experiment: Take two identical cars with identically-depleted batteries. Plug one into 120V / 12A and the other into 240V / 40A. Leave *both* vehicles plugged in until *both* are charged to the same almost-full level. (I.e. the 240V-charging vehicle continues to incur vampire losses after it's done charging.) At that point, will the electric meter have spun further for the 120V charge, or not?

grichard said:
At that point, will the electric meter have spun further for the 120V charge, or not?
Click to expand...

That's interesting: Does the battery cooling system run to the same degree, even though much less power is being delivered to the battery? If so, that'd absolutely make 120V charging less efficient, but why would they design the system that way? Surely there's much less of a problem with heat buildup when charging is slow.
•••

Not in my experience. As a matter of fact there are times during 240/40A charging when I don't hear them either, and other times when it's quite noticable.

If anything, I'd suspect during moderate weather that the cooling system would run LESS on 120V/12A , but perhaps the battery heater more during colder weather.
•••
P

Don't even need to get in to the vampire draws, cooling, etc. Just doing the math on this one reveals what costs more. If there are other outside variables, sure, will cause different results, but most likely will swing the 120/12A to even more cost against the 240/40A.
•••
B

I would think the AC to DC conversion would be less efficient at lower voltages. How much, no idea. There will also be more heating loss in the wires due to higher current.

Also, the vampire is going to be higher when charging as the contactors are closed and the DC to DC converter would be running all the time (even if the heating/cooling pumps are not). This will increase the vampire. Under normal use, the contactors and the DC/DC convertor only run a portion of the time to keep the 12v topped off.

I do agree that slower charge rate may avoid the need to run the cooling.
•••

Don't even need to get in to the vampire draws, cooling, etc. Just doing the math on this one reveals what costs more. If there are other outside variables, sure, will cause different results, but most likely will swing the 120/12A to even more cost against the 240/40A.
Click to expand...

If you draw 500W/hr over the course of 30 hours, that 15KWh has got to come from somewhere.

In one case, it will come from the 120V/12A wall connection for all 30 hours, leaving you with less total energy per hour to put in to battery charge.

In the other case, it will come from the 240V/40A wall connection for the first 4 hours, and then draw from the battery (via DC-DC converter topping off the 12V batter) for the next 26 hours, leaving you with less pack energy, Which you will then have to replenish, next charge.

Either way, the vampire draw is the same, and it doesn't affect the electrical efficiency of the charging system from the OP's perspective of .how much the house electrical meter registers. If anything, lower overall currents incur LESS loss due to heating, as energy lost is a function of the square of current.

Certainly there are time/practicality benefits, but I'd categorize those differently.
•••

Yeah, I think Cottonwood is analyzing this correctly, adding in the vampire loss for the additional time the 240/40 charger sits idle until the 120/12 car is fully charged.

But I wonder *why* 120/12 charging is less efficient. Like scaesare says, I would have expected lower resistive losses and less pack heating.
•••

scaesare said:
If anything, lower overall currents incur LESS loss due to heating, as energy lost is a function of the square of current.
Click to expand...

I thought the main reason why on this was not related to the general vampire draw, but from the energy consumed by the charging system operating. That has some overhead electrical consumption from the electronics of the single or dual charger being powered up and operating. I’m going to make up a number, like 250 Watts. So if you are charging at 120V * 12A, that’s 1,440 Watts. The whole time, 17% of the electricity you are bringing in is just going to keeping the chargers running, and not going into the battery. If you are charging at 240V * 40A, that’s 9,600 Watts. The consumption from the charging system running I don’t think would be all that different, but I don’t know that part for sure. Still 250 Watts out of 9,600, so under 3% of the energy you are drawing in is going to running the charging system. So that is where the main efficiency difference comes from. 97% of the energy is going into your battery at the higher charging power, versus 83% from the lower charging power.

Since it’s comparing it to a small number, the percentages matter more at lower levels. Going from a 5-15 adapter at 12A, to a 5-20 adapter at 16A is an increase of 4A. That is 33% increase in the power. But there is no change in the overhead that is wasted running the charging circuitry, so ALL of that extra increased energy is going straight to the battery, so the charging rate of your miles added is noticeably higher than 33% more.
•••

Just a point that is probably similar to the S is the Leaf energy use which is well studied. The overhead from charging is 300W. This is fixed and is not temp dependent. Because of this, the fastest charge is always more efficient. Davewill above basically said the same thing. but I'm just reinforcing that a fixed overhead always favors 240V efficiency over 120V

Now the S certainly has some comparable overhead. Of course, charge too fast and you have to cool. But I suspect in the majority of home charging situations, the battery is not actively cooled. From memory, the battery has to be over 100 degrees to initiate cooling. Charging at 40A doesn't heat the battery that much - maybe 10 degrees. Assuming most is happening at night after the car has been sitting and cooling, 100 degrees isn't a typical temp reached outside of AZ, FL etc.
•••
E

I think we do need to differentiate between temperatures. When is it cold enough, 1,400 watts won't be able to heat the pack enough to charge the battery at all, so in that case, it is 0% efficient, constantly pumping 1,400 watts and gaining nothing. At the same temp, 9,600 watts will charge an S around 27mph, after about 1 hour of drawing 30 amps to heat the battery. I don't know what efficiency this is, but it is a lot better than 0%.

Indirectly, in cold weather 9,600 watts also seems more efficient to me because there is less time you are spent actively heating the battery, and I suspect there are cases where 9,600 watts of charging power creates enough heat passively in the battery that the active heating does not need to be used. 1,400 watts must have this sweet spot also, but it has got to be a very narrow.
•••

Y
Is 120v enough to precondition battery in Winter?

R
Should I get a Model 3 Performance? Charging concerns.