Anyone bought this, replacing an SSD/endurance SD that they'd already fitted?

I have a Samsung T5 500GB SSD in my M3P currently, partitioned 50/50 for music and recordings. I had incorrectly assumed before I got the car that it would fill up with dashcam/sentry footage until such time as it ran out of space, at which point it would overwrite old recordings. I've since found out that - inexplicably - the car only records the last hour of driving, unless you manually save/beep.

I'm contemplating getting the Jeda SSD, but at $145 for 256GB it seems quite expensive - basically almost double the price of the aforementioned T5 SSD, with half the storage.

I haven't yet needed to take the SSD out of the car to look at recordings, I don't have a YouTube channel where I post mundane journeys, etc.

My head is telling me what I've got works and there's no need to change it, even for a fancy magnetic connection, but I'm quite keen on the whole Jeda ensemble (I have the hub already, looking to buy the tray today). 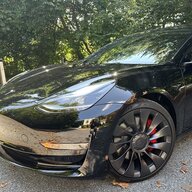 There is no end to the harsh criticism of Jeda in these forums. Just search JEDA, and you'll see all you need. They sell overpriced merchandise that routinely ships extremely late. They overpromise and underdeliver. And some have reported the hubs no longer working now.

Personally, I have a lot more trust in Samsung and their highly rated T5 than Jeda.
•••

Thanks. I guess i've been quite lucky as the stuff I've ordered from them has turned up pretty quickly (even considering its coming from the States to the UK).

I did however try getting a discount to upgrade my hub & wireless pad when new versions came out, and it was very difficult getting any timely response, and they eventually just ignored my emails after they'd offered me a discount and I asked to take them up on it.
•••

D
Recent Accident- Sentry/Dashcam did not record the Accident!!