Wiki Largest gaps between Superchargers on US Interstates

Tesla recently updated their Supercharger map and they've finally added a pin for Pueblo, CO! There's no definite location yet but there was talk last year that the owner of a new Culver's to be built at 2285 West Pueblo Blvd. was interested in hosting a Supercharger. For those trying to...

Splitter! Rochelle, IL under construction at a Casey's. 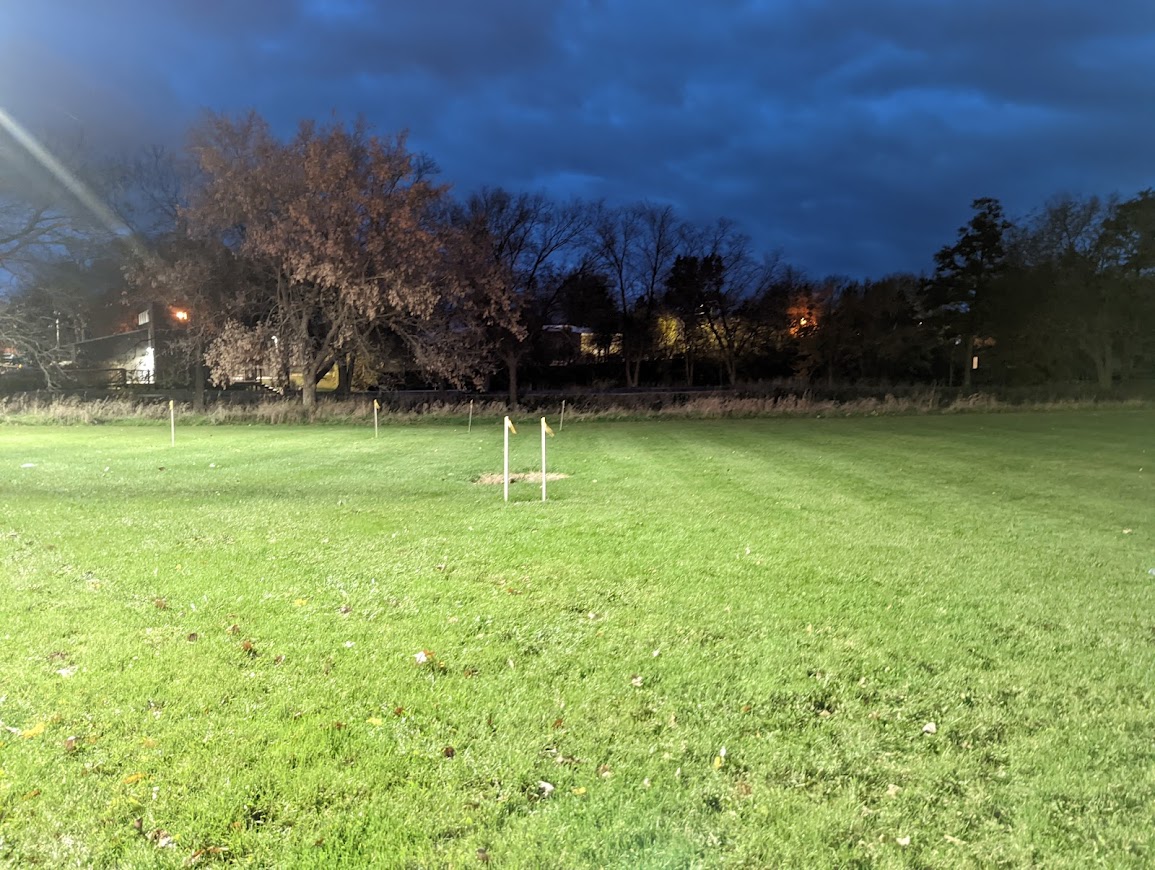 Looks like a supercharger is planned for Rochelle, IL for Q3 2021. Has anyone seen any permits or any rumors around this one? https://www.tesla.com/findus/location/supercharger/RochelleILsupercharger

wws said:
If we count Canada, then Real Soon Now, Soldotna Alaska to Prince George BC - 1855 miles.
Click to expand...

Yeah- As an Alaskan, that gap really affects me. Those two stations are at the ends of the only routes connecting Alaska with the rest of the SC network. I drove my new Model S from delivery near Seattle, WA to my home, about 230 miles south of Anchorage, AK, in nine days in October 2021 via Route 37 and plan another round trip this summer/fall.
So where to locate how many new superchargers to adequately close the gap?

Hey Tesla: My priority sites to fill this, the largest gap in the N American network, would be:

These sites are over two different route options, thus the 3a-3c numbering. Both would shorten a nine day trip to a three day trip. The first option requires only three supercharger stations, the second requires four. They both require overnight level-2 charging between some stations, but you need to stay overnight somewhere anyway. If your car has less than about 270 miles of reliable range, there are mostly good level-2 charging locations to get you across the longer gaps.

Priorities 1-3a use Route 37 (the Cassiar Highway), which has a few overnight charging possibilities between 2. and 3a., but none of those possibilities are optimal. I used one, but it required level 1 charging for two days at a resort operating on a wobbly diesel-powered generator. There is a level 2 possibility at that resort, but it remains unexplored. HIgh-voltage transmission lines are tantalizingly close. Other locations are either not open year-round or are even sketchier. There isn't a whole lot along route 37. A good level 2 option for an overnight stay near Iskut, BC would solve this overnight issue along the Cassiar. Iskut got connected to the grid with BC Hydro in 2014. There is a campground with cabins, and a lodge there, both now have 30a-110v power outlets.

For cars with shorter ranges, these still make a 3-day trip possible because there is solid level 2 charging to fill the longest gaps with 2 hours or so of charging, especially between Prince George, BC and Kitwanga, BC (302 miles), and Tok and Anchorage, AK (318 miles).

Number 4. Beaver Creek, YT, closes a 290 mile gap between Tok and overnight at Haines Junction. There is sketchy level 2 charging at Beaver Creek now. A better level 2 option would be adequate there, but even a 50 kWh "supercharging" station would be nicer. At Haines Jct, there is DCFC. However, level-2 charging there in the off-season there isn't great. It would be nice to have a solid level 2 station at a motel in Haines Jct (or see below). Currently, you'd need TT-30 splitter and extension cord to charge at two rv spots next to a gas station and walk to a motel. Regardless of the route, you need to pass through Haines Jct.

Priority number 5 splits the 272 mile gap between Prince George, BC and Ft St John to 188 and 84 mile segments. There may be already decent level 2 chargers along this route, so #5 might be even lower on the priority list. The next longest gap would be 258 miles between priority 2 and Whitehorse, where you'd eat dinner and charge at level 2 for a couple of hours before making it 96 more miles to Haines Jct, heading to Alaska. Going the other direction, you'd eat lunch in Whitehorse while charging at level 2 before making it 258 miles to priority 2. In between, Marsh Lake has a DCFC station 34 miles east of Whitehorse, a level-2 charger there might help. Otherwise it's Teslin, which is halfway, but is pretty small.

All this said: There are already several DC fast-chargers along the route. Perhaps the cheaper interim alternative would be prioritize providing CCS adapters for those of us stuck on one side of these large gaps!!
Reactions: Krash
•••
I

Splitter! St. Johnsbury , VT. Development Review Board application found. It will be at a Price Chopper supermarket.

From the agenda for the 3/24/22 meeting of the StJ Development Review Board (minutes not yet posted): Application of Green Mountain Realty Trust by its agent for a Conditional Use Permit for a non-residential accessory structure/an EV charging station (1,200 electrical service/transformer; two...

Splits 109.7 miles on I-91, 65.9 miles from West Lebanon, NH and 45.8 miles to the end at the Canadian border in Derby Line, NH.
(Derby Line, VT is known for having a library that straddles the border. The entrance is in the USA. A family was caught crossing the border by cutting across the library lawn. Family expelled after crossing the border using the Haskell Library lawn).
Reactions: kayak1, mociaf9, Prairie and 1 other person
•••
I

Superchargers at a gas station….and I’m not talking about Buc-ee’s. https://la.itic.occinc.com/larecApp/ticketSearchAndStatusView.jsp?enc=Eoj6d752A5psT1%2FVbfoSaggl13%2BJYpl8Ah2P5NAJ%2Fk7cgm1g966iw%2B9%2B1%2BWgZG4y 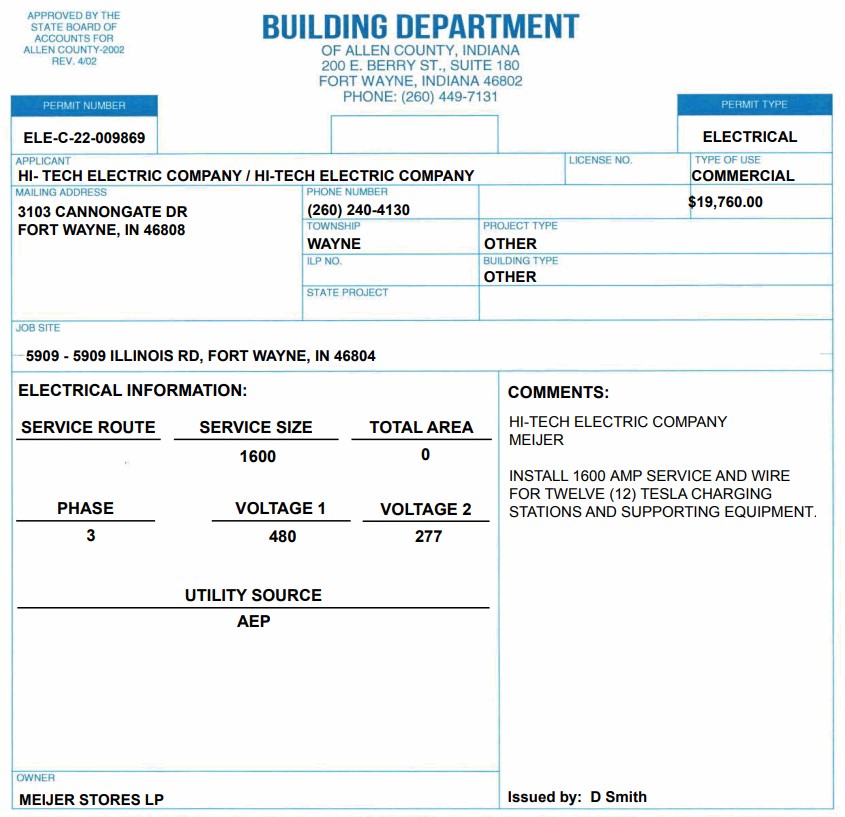 There's a report in the Indiana Tesla Owners Facebook page that a supercharger under construction has been spotted at the Meijer on Illinois Road. Anyone local to the area that can confirm? I don't see either the Illinois or Dupont Road Meijer locations noted on supercharge.info yet.

Under construction at a Meijer supermarket.

Still need a Supercharger in Gas City, IN properly to split that gap.
Reactions: kayak1
•••

A list of all supercharger coordinates and a script to grab them.