I put my car into Ludicrous+ last night to try out the improved acceleration in 2020.44 and waited the estimated hour for it to heat up. It stopped progressing with about 5 minutes left, but I was finally able to get it over the line by accelerating fast a few times. The dash never changed to show the motor power and launch mode wouldn't engage. When watching the driving display it would go from heating to cooling without ever engaging launch mode. I waited another 30-45 minutes and it never engaged. After almost 2 hours of waiting I finally gave up for the night. The outside temp was 45 degrees Fahrenheit. I also tried resetting to no avail. Has anyone else experienced this? Should I schedule a service appointment? My S Performance was manufactured in 12/2019 and I've launched it in Ludicrous+ a handful of times.

Not to sound rude but this kind of reads like a case of operator error unless you have a rare bug that I've never heard of. To rule that out, make sure that you're doing the proper sequence as they updated it several months ago and it's now different then what it used to be. The previous version that's been around for years required a frantic tap dance back and forth that sometimes worked but most times didn't and always made you look like a jackass in front of the people you were trying to impress. The new version is better once you realize the subtle differences to how they changed it.

In the menu there is an option for it to show you how to do launch mode, I would start there. You simply hold the brake with your left foot and then pinning the accelerator to the floor with your right foot for a second or two until you see the little indicator on your instrument cluster that says launch mode is engaged. Then, anytime after that you can release the brake to launch. After a short period it will release launch mode if you don't release the brake which I believe is 8 to 10 seconds or something like that.

In summary, you don't have to wait for the battery pack to reach optimal temperature to engage launch mode. It's available the moment you authorize ludicrous plus to begin warming the battery. You just may not get as fast of a time until the battery pack has reached full temperature but it's still plenty fast. I've also found that, in most cases, you get a pretty similar launch from 0 to 60 without even engaging launch mode. It helps but it's not required.

Thanks, it's possible it was operator error, although I've launched it since the sequence was updated and cheetah mode was released and I believe I followed it correctly. That said, I thought it had to be up to temp and have the motor power on the dash (this didn't go away, did it?) before it was enabled, so maybe I wasn't patient enough in waiting for the font end to drop like it has before. I'll try again.
Reactions: Ostrichsak

RunrunD said:
Thanks, it's possible it was operator error, although I've launched it since the sequence was updated and cheetah mode was released and I believe I followed it correctly. That said, I thought it had to be up to temp and have the motor power on the dash (this didn't go away, did it?) before it was enabled, so maybe I wasn't patient enough in waiting for the font end to drop like it has before. I'll try again.
Click to expand...

In the interest of full disclosure; I don't own a car that has the cheetah mode feature. There's a chance that it differs but I'm relatively certain that the activation of launch mode is the same across the board on all performance variants. You just don't get the maximum performance until the battery pack has reached optimal temperature but their performance output increases as the temperature does the entire way. It could be different with the newer cheetah mode version of the cars but I would be surprised if it was. I'll be the first to admit if I'm wrong though if somebody who has one & wants to correct me.
Reactions: rickyjb 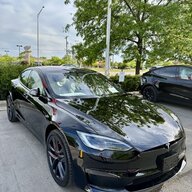 I did a launch yesterday on my 2020 MSP, and it was straightforward. I go to the Driving menu then select Ludicrous + mode. I will then get a pop up that says bring it on, or I want my mommy and gets you out of it. Since it was 65ish yesterday I didn’t get the warning about not being able to use it in low temperatures or below 45F. Maybe that’s what you experienced.