183 miles from my bit of Wales to Scotch Corner and another 50 miles towards Whitby and into the moors, a couple of hours for the visit and back the same route in my 2018 S100D.

It worked out as expected 5hrs each leg with the 2 hour stay - a long day. Outbound from home fully charged and conditioned the traffic was heavy, Too heavy for me to bother with any automation. I was fully loaded with OH, snacks and stuff in case of an overnight stay somewhere. I drove at no more than going nominally over a limit (I don't have or need any points). Arrived at Scotch Corner spot on on ETA and mileage range usage as advertised despite a loo break at Birchwood - which has to be the worst services I've ever been to; lousy signage, missed the car park and so desperate for the loo that I parked with the HGV's and used a bush.. Just as well with the circuitous route from entrance to the loos inside that place!
A couple of sandwiches while driving then coffee and Sparks at Scotch Corner - coffee not that good but polite and friendly place and their signage is now obvious and easy for registrating number plate. Left there with 250 range and after the visit got back to Scotch Corner with 150.

It was getting late with the sun going down. I plugged in while OH registered us (yes each visit even if same day), cleaned the windscreen inside and out to reduce headlight dazzle, ate my packed sausages, Jamaican patty, green salad, potato salad then went for coffee and we hung around while the car got to 288 range and we'd pee'd the coffee out.

The leg back was much lighter traffic and night time should be when a co-pilot is handy so most was done with self steer and miserable rain. Lane changes in an S are simple with the stalk and it appeared to be doing well with no signs of worrying about curtain-sided HGV;s etc. Set at +7% speed we sailed along smooth and quiet with the air suspension except for getting out of the way of a large motorhome and the usual German cars all trying to ton-it as well as a few small Peugeot with big ideas and a Škoda.

After one overtake I told car to go back to middle lane - it'd just got halfway over the line when it’s systems saw the curtain-sider in the slow lane and it freaked big-time - full klaxons and threw itself violently back into the fast lane and must have had the guy behind thinking I'd gone nuts - not a manoeuvre ya wants at those speeds in the wet.
Once back on A roads I drove it a tad more aggressively than my usual due to little traffic and wanting to get home. I did beat the ETA from Scotch Corner by half an hour but used 245 mile range over 183 distance.
Reactions: Electroman, Stranger Dings and Beady3647 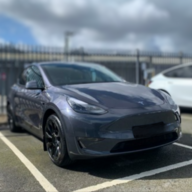 Sounds pretty normal...which it should be! Looks like the later S's suffer from the same Phantom stuff as the 3's. The early ones seemed less so.
A

Thanks for the information. I'm just curious, did the potato salad have spring onion in it?
Reactions: UncleCreepy, Magstauk, jimbo_hippo and 1 other person
P

adsheff said:
Thanks for the information. I'm just curious, did the potato salad have spring onion in it?
Click to expand...

This was a short notice trip and I cheated and bought the potato salad. I usually make my own ideally with salad potatoes diced and mixed with diced: radish, carrot, gherkin, spring onion, a few thinly sliced jalapeños, a jar of capers, some raw sweetcorn plus anything else suitable in the fridge mixed in with a jar of mayonnaise. A large mixing bowl will keep 3-4 day in the fridge and goes well with hot or cold schnitzel.
(I'm lazy and usually make up 3-4 days worth of dinners in one go, If you want to go of topic and start a food thread I've got a great strudel recipe that can be cooked from frozen if'n ya wants to make up a big batch of them)
Reactions: adsheff
A

I'm interested in the schnitzel - you don't hear of many people in the UK eating schnitzel. Do you make it yourself?
Reactions: Magstauk
P

adsheff said:
I'm interested in the schnitzel - you don't hear of many people in the UK eating schnitzel. Do you make it yourself?
Click to expand...

Of course and dead easy - pork rather than veal. Simply buy some pork loin steaks, apply a meat hammer to thin, enlarge them and process through flour, beaten egg and breadcrumbs before frying. I find it most expedient to have three dinner plates handy - one for each coating. Do press the breadcrumbs in well around the edges. Traditionally one kept old bread on top of the oven or stove to dry hard without mould and made one's own breadcrumbs but OH keep feeding it to the wildlife.
I'm sure I've seen frozen ones in lidl or aldi but never bothered trying those.

Next recipe to try is my take on beef olives: ask butcher for suitable thin cuts of steak - hammer out again. A small pickled onion surrounded by two halves of a larger dill pickle gherkin and then wrapped in smoked bacon before being wrapped in the steak and held closed with a skewer (If you have a dogwood bush (traditional) or any non-toxic bush/tree in the garden then make own skewers). Cook in a stew or casserole of spuds, veggies and stock for a one-pot tasty meal (keep the washing up to minimums)
Reactions: Mr H
A

I'm going to try the schnitzel - need to get a meat hammer. I've always found coating things in breadcrumbs ends up with more stuck to your hands than anywhere else - I guess I need practice.