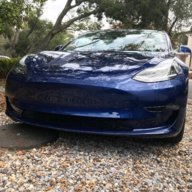 To get an idea of my charging experience in Mid Range , 19" sport wheels

Started in San Jose at 246 battery range. (last 15 miles or so of range do take a long time to achieve)

About 4 charge spots open - had lunch - charged 43-231 range in about an hour - pretty fast.
Drove to Oxnard Charger (about 149 miles) with 69 left (averaged 259 w/h - keeping it at 70 and in slow traffic at Santa Barbara). Autopilot works great - except at the roadworks and if someone is merging slow onto the freeway in front of you)

Recharged in Oxnard (lots of open spots on a Friday pm)(69-226 miles in 40 mins).Then drove Pasadena to Irvine with 100 miles left. Ayres hotel there had 4 chargepoints - all open at 9pm on Friday night) - recharged overnight to 238 mi.

Before I left on Sunday - recharged to Max (259 miles was "charge complete") - at hotel. Was going to go over the grapevine from Pasadena, but Nav said only 6% remaining charge projected by Tejon Ranch - and I was chicken and it was heavy rain in LA (plus snow was forecast) so I drove almost same way back - stop in Oxnard (recharged 85 - 165) range in 30 mins. Top up at Buellton (75 - 131 mi in 27 mins) (I was only getting 28KW for some reason - slowest stop), made it to Arrastadero with 35 miles left (had to drive at speed limit only). Great Korean BBQ there - fast recharge (35 - 232 miles in 56 mins - saw 119KW). I might have made it back to San Jose from there - but stopped in Salinas again (added 50 miles in 7 mins - bathroom break needed anyway) - drove 80+ most the way back - with 85 range remaining.

Autopilot makes trip much less tiring than with regular car. A couple of quick extra top-up stops allow you to drive faster and with less range anxiety (the stop time is mostly offset by the extra speed) - but at least one SC seemed slow (Buellton) compared to the rest. Overall no waits for SC, good facilities by most of these). Yeah, if you are in a rush, and have to do this sort of trip a lot, EV still has some limitations/tradeoffs - but in general - very impressed.
Reactions: goldengate and eprosenx
•••
R

Alpaca said:
A couple of quick extra top-up stops allow you to drive faster and with less range anxiety (the stop time is mostly offset by the extra speed)
Click to expand...

I'm glad to see you be comfortable with this mindset. We see a lot of new owners who seem to want to avoid any stops at all, even a quick 15 minute fast Supercharger hit, and then they complain about the car being deficient. Thank you.

I won't generally plan to go for 6% margin with no stops. For a continuous drive, I'll shoot for about 15-20% margin to allow for a little unexpectedness.
Reactions: IdaX
•••
M

If you get a particularly low power at a Supercharger and there are open stalls, unplug and try another. If the other pedestal you're paired with is delivering high power, you only get whatever power is left. Also, some California sites are heavily used and when the plug wears out it generates heat and the Supercharger automatically throttles the power.
••• 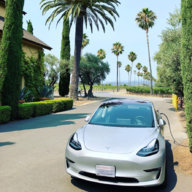 I'll be driving this corridor next week, and am a bit worried about the congested Atascadero / SLO superchargers. Last time I had to wait 45 minutes and really had to go to the bathroom on top of that. This time maybe I'll stop at Salinas (I hear you have to use the northern exit to avoid driving through town) to give myself some buffer. Really wish they had a SC in King City... that would be a perfect spot, and is in the middle of a very long stretch with no SC's.
•••

Yes - use northern exit for Salinas - not Main Street exit as nav tells you ...
Reactions: goldengate
••• 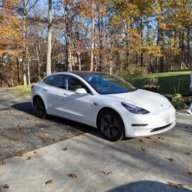 I did a similar trip from DC to Wilmington NC. Charged more than needed but loved EAP. As long as I can get my wife and kids to pack less (they get trunk, I get frunk) I'll never drive our other cars on a road trip again.
TRIP REPORT – Northern VA to Wilmington NC ~380 Miles
•••