Mini-review of Model 3 collected in July

I've been enthusiastic about the M3 since it was announced and put a deposit down immediately, and ordered immediately, on 1 May 2019 I think so before the referral system was working. SR+ blue. Car arrived in Tesla Stockport in mid-July, and so must have been one of the first in the UK.

Having all the controls on the panel takes a bit of getting used to. Key thing is to simply drive and not fuss around too much for the sake of it. Its actually very relaxing and simple.

The car is fast. I'm driving in traffic most of the time and the occasional motorway trip to Oxford or London from Manchester. Pulling away at traffic lights is crazy fast. Handling is good but I'm not pushing hard. Its quiet at low speed but noise increases at higher speeds. Initially it seems loud because its that quiet below 30 mph.

Range is totally not an issue in UK. I've driven to Oxford without needing to charge at all on the way, just at the destination on 13A. On a trip to London we stopped for lunch at a supercharger and almost didn't have time to finish eating before it was fully charged. It just works. The only anxiety I had was if the M3 chargers would be full. I can see a time when M3 owners get frustrated when a model S is using a M3 charger when there is a single cable charger free.

Other Tesla owners have been super friendly and chatty at the Supercharger and this is very nice.

There is a lot of space inside the car. My previous car was a Jaguar XE. Same length as the Model 3 but the M3 is a lot more spacious, particularly in the back and boot.

I found no issues at all with the car so far apart from the screen freezing and resetting once during a long trip, but it didnt affect anything.

One initial problem was with the seat. Couldn't get it comfortable, the lumbar support was like a lump I didnt want. Gradually I've either got used to it or the seat has moulded. Its Ok now, but not the best seat experience I've had.

Overall 9/10, losing one for the slight issues with the seat. I'm certain that it will be an exceptionally popular car.
Reactions: Roy W., Andrew_SE23, MaDProFF and 3 others
••• 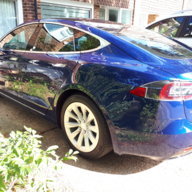 Good to read that you have settled in with your 3 and enjoying it. Regarding the lumber support, do you know that you can control the amount of support your lower back needs using the round button on the side of your seat, next to the normal seat sliders. This is a round thing with up/down arrows.

mikerb said:
The car is fast
Click to expand...

If it is bothering you (e.g. giving your passengers whiplash!) then Chill Mode may help. I think it is a bit disappointing that Chill Mode doesn't have "kick down", in case of situation where you did need it ...


mikerb said:
I can see a time when M3 owners get frustrated when a model S is using a M3 charger when there is a single cable charger free.
Click to expand...

I doubt that will be an issue, by then, as hopefully it is only a month or two until all existing stalls have been converted (over 75% done so far, but a number of notable Superchargers in North West still with only 2 / 4 converted)

Initially Tesla put "Priority for Model-3" on the converted stalls, but then they stopped doing that ... and I suspect that any Model-S/X driver who doesn't read the forums (probably "most people") won't have a clue that the 2-cable stalls are for Model-3, and that some sites have not had all-stalls-converted-yet.

Link to Map of Superchargers Converted to CCS for Model-3
Reactions: mikerb
•••

G
Model 3 and how I got here

FSD Mini Review/Rant - Promising, But Not Worth Your Money - Yet

A
Model 3 Review after 5 months