Model 3P B-Pillar Rattle. How Do I Get This Fixed?

I have a (roughly) six-month old Tesla Model 3 Performance. The same day I picked it up and drove it home to northern Arizona, there was a really annoying and loud rattle from the driver's B-pillar. However, it only occurred on some road surfaces, but once it started it never stopped. Since then, the car has been back to service three (3) times The first two service experiences were the mobile tech (a very nice and polite guy) who tried to fix it with self-adhesive tape, but that didn't work. I then took it to the Service Center in Scottsdale (a 200+ mile round trip) and they did some 'insulation' job, which I thought had actually done the job as it was quiet for about 2-3 months...then it started up again, albeit much less annoying, and again, only on certain road conditions. Again (earlier this month), I took it back down to Scotttsdale and the tech went for a ride with me, and of course on the nice smooth roads around the service center, the rattle would not reappear. In this instance Tesla never even looked at the vehicle, despite me leaving it there for the day - apparently, end-of-quarter got in the way and they were too bus fixing cars to be delivered to new customers.

Sorry this is a bit long-winded, but I'm wondering what my next steps are? I really don't want to waste a complete day taking it back down to Phoenix if Tesla are either going to (a) not even look at it, or worse (b) throw their hands up and say we can't reproduce it, so we can't do anything! Don't get me wrong, I absolutely love the car, but on a $60K vehicle, I shouldn't have to put up with rattles.
••• 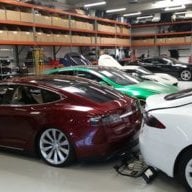 Are you trying to hear all the rattles and possible noises? That could be a problem. If you're looking for an absolutely perfect quiet experience with music off, there's some information online and probably on YouTube of DIY fixes with felt in the seat belt retractor area on the inside of the B-pillar.

When my Model 3 Performance was new I heard all of these noises, particularly the dreaded and wildly popular "wind noise from the top glass.' There's all sort of kits to fit into the gaps and I even tried one and even not very scientifically measured the differences. Those kits didn't do much and they would affect the way water would drain, including while squeegeeing the glass at QuikTrip. (Yes, really)

Long story short, I don't hear most of these noises anymore and I consider myself overly sensitive to sound and have also performed automotive durability testing where documenting noises is part of the job.

One thing I haven't done, is get rid of my noisy Tesla. In fact I have gotten more.

Good luck on your adventure, wherever it takes you. And I may be in Sedona on Friday, not that you or anyone else here would care.
•••
D

When one picks up a brand new car, especially a $60K vehicle, one doesn't expect to it to rattle driving it off the lot. (Well, not literally, I had to drive north on I-17 around Anthem before the road surface deteriorated and the rattle appeared.) I know some cars come out the factory with 'issues' and I'm OK with Tesla service fixing it post-delivery, but their solution seemed to be useing Duct Tape and Chewing Gum to suppress the noise (which they did successfully, for a while). Now, I suspect that stuff inside the door pillar needs changing out, as the previous 'fix' clearly wasn't a permanent one.

The really hard issue is that I can't reproduce the rattle anywhere near the service center, because the roads are so good. I also fully understand that unless the tech can reproduce it, he doesn't know what it is, how to fix it permanently, etc. I get that. I'm just wondering if there is a Level-2 service layer that I can escalate it up to. I'm quite happy to leave the vehicle with them for as long as it takes (providing I have a loaner to get home and back).

BTW, "And I may be in Sedona on Friday, not that you or anyone else here would care.". I would definately care if you got lost or stuck on a mountain up here - I'm part of the Yavapai Sheriff's Search & rescue team

Any help is greatly appreciated with this noise that’s driving me insane!