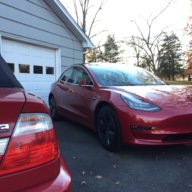 wow, they actually called me. It only took 4 days to make this such an easy conversation!

They have no ETA on the part and they said it's the entire seat assembly. Gosh, this means I'll never get it...
•••

holy shiiiet. they actually got the seats in. I hope there is no hiccup with wording the wrong seat type and color! pray for me haha
Reactions: Harvey Danger and mxnym
•••
V

I have a 2017 and have had mine into Tesla two times for second seat issues.

The first time the (left/middle) seatback got stuck in the 45 degrees forward position and would not move under any circumstance. They ended up replacing the seat.

The second time was when the manual latch for moving forward and back would not release the seat (again left/middle). Not sure what they did to fix it that time.

In addition, I frequently get the message about second seat locking even though I KNOW it is locked in place. I just have to go back there and fiddle with it (move it forward and backward) to get it to stop - again this is the left/middle seat. I have never had any issues with the right-side seat.