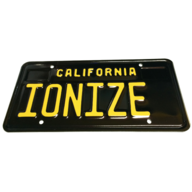 For more than half of the Summer days, we live up in the Sierras near Donner Pass in California. The last 2.5 miles of road to our property is a dirt / rock road that is graded every year by the utility (PG&E) that also manages a lake up there. Most of the road is relatively smooth but there are some stubborn rocks sticking out of it in places as well as some points where you are driving directly on rock formations that are naturally a bit bumpier. We drive this road with all forms of cars and trucks without ever having an issue or hitting a rock.

When driving this road with the Model X, I always have the suspension set to "High" or "Very High" so that I can simply avoid any rock bumps by driving over them instead of letting the wheels hit them. This seems to work well and I get no complaints from the passengers about the smooth ride even though we do need to weave down the road a bit to accomplish this. The only NVH we do experience is an occasional "clunking" from the front suspension - not because we are hitting a bump, but instead the ground is dropping a little (say 2") and I believe the suspension is hitting its extension limit stop due to already being in the High or Very High position statically. The sound is not a reassuring or pleasant one (I never hear this in any of our other vehicles at full extension), but I always assumed this was harmless and by design.

I was driving from our cabin into town on the dirt road to buy a tire plugging kit for a Honda SxS vehicle we have that had a nail in the tire. I was on a part of the road that was really not all that bumpy when I hear a "pop" and a sudden rush of air from the front left wheel area. I stopped the car immediately to check what was going on. I could see that the tire was fine, but the suspension was very low in that corner and air was hissing outl and the compressor was on. In a rare moment of optimism, I figured that the air line going to that suspension cylinder might have popped off. Since I was already a ways down the road, and I knew that there was also a conventional shock/spring strut in parallel with the air spring in that corner, I continued on the the pavement carefully and the car seemed drivable even though it was assuming what could be described as a "stinkbug" stance where the air suspension was high in the back and beyond low in the front.

Driving on the pavement was event-free and so I returned down the dirt road to our cabin where I had tools to lift the car and take the wheel off to take a closer look at the air suspension to see if there might be a simple fix. Unfortunately, the stance of the vehicle made the return trip down the road very treacherous as I had to drive around every rock but still had the bottom scrape at least twice over rock formations (we have never had any underbody contact before this). I put some air lifting bags under the car to lift the wheel and take it off and alas, this is what I saw: 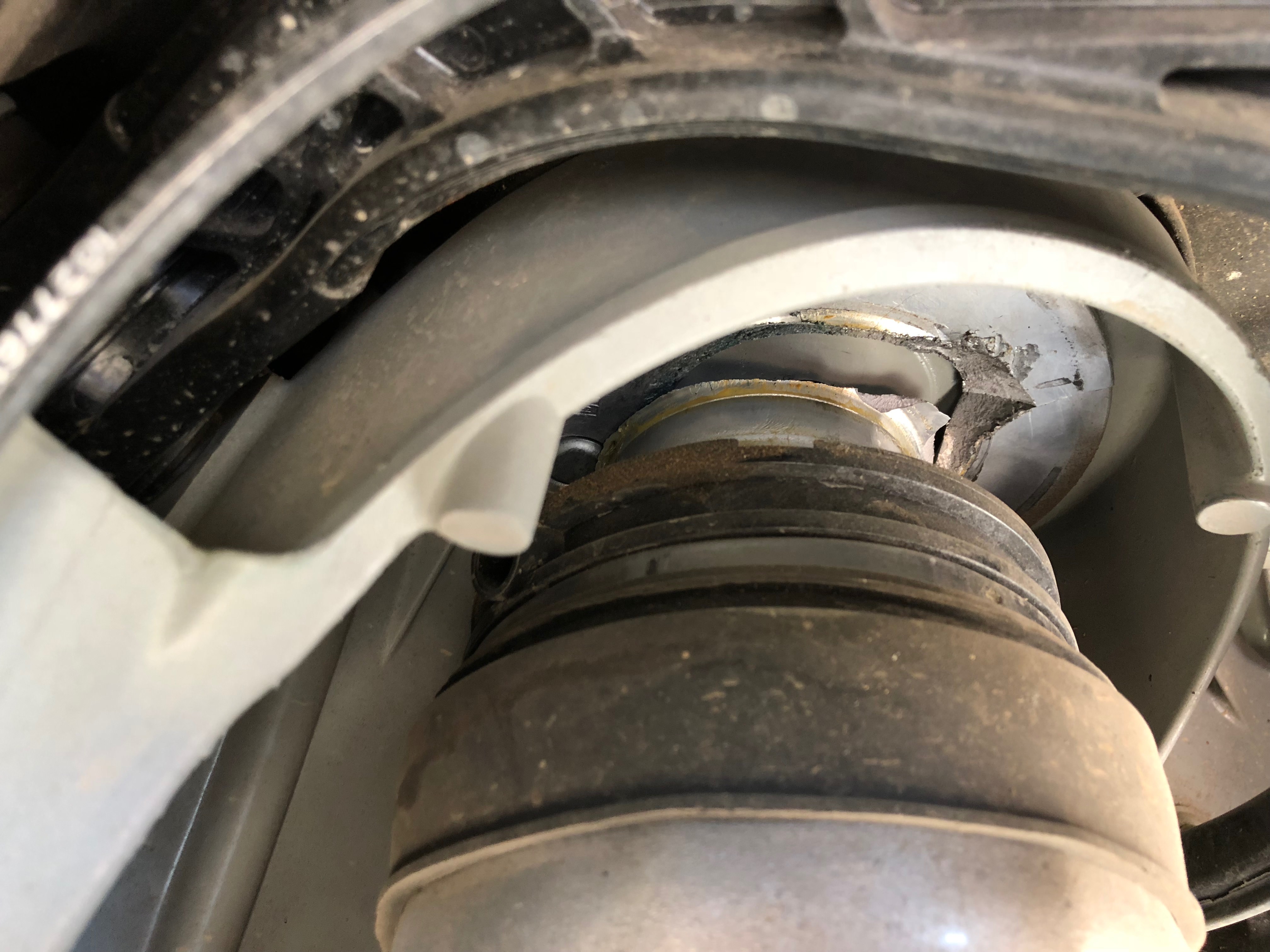 Basically, the entire upper mount of the air suspension had fractured off. From the looks of it, it appears to me that that this broke (or at least has its initial fractures) in tension. There is some additional galling from driving it down the road one more time at full sag, but it basically looks like it was pulled apart. Due to the fact that there was no real bump happening when it failed, my assumption is that it had fatigued and fractured to the point it was ready to fail at any time.

I had the vehicle towed via flatbed down to the Rocklin Service Center on Saturday, Sept 1. Fortunately, were open this day of the Labor Day weekend. Today (Sept 5th), I called to check on the repair status of the vehicle and spoke to a SC person at length about the issue. The air suspension component has not shipped, but they should have it soon. The SC person informed me that Tesla would not pay for this repair (around $1k) because it was related to driving on rough roads and that it was possibly from hitting a bump. I explained to him that there was no bump and you could see from the component that it appeared to have failed in tension, not compression. I told them to go forward with the repair and to save the part for me so that I and others can examine it under the microscope later.

Beyond the cost of the repair and who is liable to pay for it, my concern here is that we can't reliably drive the road to our home with this car without this eventually happening again. We don't have this problem with any of our other vehicles, nor has any of the multitude of people who drive to come visit us every summer using a variety of cars. This road is also driven by many others in the area going to a nearby public lake, although I can't speak as to their outcomes. The fact that this car alone makes a disturbing clunking noise at it drops over any "anti-bump", makes me suspicious that this is a contributor to the air suspension failure. I'm sure the clunking could go away at a low suspension setting, but that opens us up to other problems on this road.

Anyone else have relevant experiences to share?
Last edited: Sep 5, 2018
Reactions: cwerdna, Terthen and TexasRat
•••

Perhaps a shorter question might get this rolling. Has anyone experienced an air suspension breakage like this? The whole thing is a bit baffling to me as this component doesn't really take any big transient loads - the dampers play that role.
•••
C

I've never seen any thing like that and I've been off roading my Range Rovers (all equipped with air suspension) for years.

I know that some early-ish build MX had front suspension failures whereby the aluminum components literally fractured (similar to yours). Tesla should be ashamed of themselves for not covering this under warranty. It's an SUV, and dirt road use with the occasional rock obstacle should be assumed.
•••

chdavis said:
I've never seen any thing like that and I've been off roading my Range Rovers (all equipped with air suspension) for years.

I know that some early-ish build MX had front suspension failures whereby the aluminum components literally fractured (similar to yours). Tesla should be ashamed of themselves for not covering this under warranty. It's an SUV, and dirt road use with the occasional rock obstacle should be assumed.
Click to expand...

Do you have any forum or other references for these failures. My car is an early build (VIN 24xx), and I did notice when looking for replacement part on my own that there was a newer part number for these front air struts that seller (who I presume was quoting some Tesla service doc) said they should only be replaced with (i.e. the original part was deprecated). I asked the service center about this and they agreed that there was a newer part they were using but that they couldn't find any documentation as to why the change was made.

Worse, it has taken over two weeks to get the car fixed. The replacement part was available in Fremont from day 1, and they were supposed to send it the next day, but for some reason they had to wait two weeks to receive the part. Sounds like the are prioritizing new production over repairs as usual.

Hopefully I get the car back today. I intend to get the broken part back and depending on a more detailed analysis of the failure, argue my case for coverage under warranty. I agree this seems like a very unusual mode of failure.
•••
C

Colby Boles said:
Do you have any forum or other references for these failures. .
Click to expand...

chdavis said:
I've never seen any thing like that and I've been off roading my Range Rovers (all equipped with air suspension) for years.

I know that some early-ish build MX had front suspension failures whereby the aluminum components literally fractured (similar to yours). Tesla should be ashamed of themselves for not covering this under warranty. It's an SUV, and dirt road use with the occasional rock obstacle should be assumed.
Click to expand...

I agree as well. This is supposed to be an SUV, I feel like tesla should cover this under warranty. OPs post to me doesn’t seem out of the realm of what this car should be able to handle
Reactions: JQS3
•••