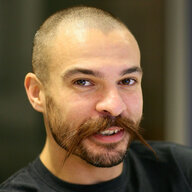 A word of warning - it might not be anything to do with the suspension, and instead it may be grit getting into the bash plate.

I had my upper suspension arms replaced for £768, and it made no noticeable difference to the creaking/squeaking. I argued with the service centre, who insisted that the suspension arms were creaking, but it was "masking" another thing that was creaking caused by the steering column at low speeds. I couldn't really win this argument - I had no evidence that they were wrong, and at this point they had replaced parts and expended labour.

The next day I went to a different service centre, initially to get the "intermediate shaft" replaced (ironic given that I felt I'd been intermediately shafted the day before). When I got there, thankfully the technician asked why there was such a specific request. I explained my poor experience the day before, and he seemed quite keen to investigate to make sure that what was requested was needed. He instead removed the bash plate, found loads of grit, sanded down the mating surfaces, and only charged me £90. 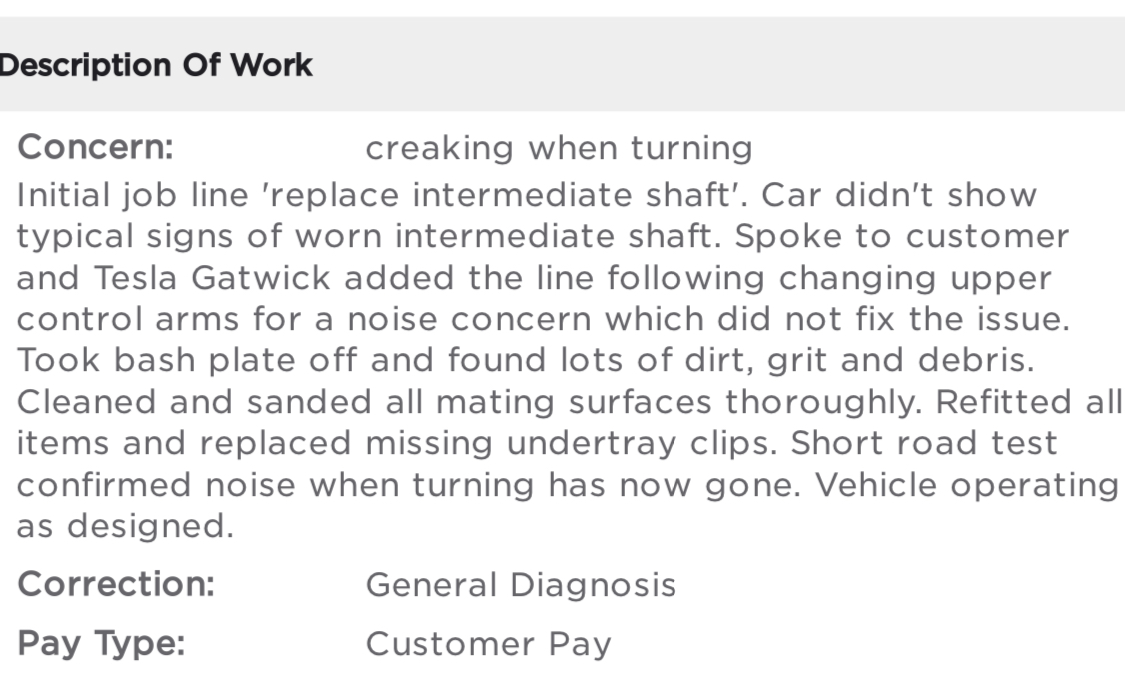 Thank you - very helpful. What exactly is the "Bash plate" - i will make note of this in my service request. I had a recall service in Nov where they did work on the upper arms and greasing them so i've reopened that case in the hopes they look at this under the recall request.
•••

tommytuna said:
What exactly is the "Bash plate"
Click to expand...

I think (and I know very little about cars) that it's the protective underside of the car, that prevents the battery getting damaged if rocks and things 'bash' into it. I would hope that in Toronto the service centre folks are slightly more aware of the possibility - given all the salt/grit that you folks need to put on the roads, I suspect it might be a more common issue there.

Thanks a bunch for that. They sent me a quote for only $275 dollars in parts to replace both upper arms. I complained in the request that i had the upper arm recall service done in 2021 and now the issue. In meantime, i tried to spray around and inside the rubber boot on the upper arm above the tire. THe boot doesn't look like it is in very good with pieces of the rubber missing on backside. I wonder if when the vehicle sat for 5 weeks in hot humid weather without being driven if some rust developed.
Reactions: DeejUK
•••
K

MaikWho said:
Absolutely no reason why any of those parts should be failing for everyone unless it was faulty parts/engineering. This is a very common X issue. Multiple threads on the first page on the same complaints. NHSTA do something!! Everyone experiencing these issues should report it to NHSTA so Tesla issues an actual fix/updated part and doesn't charge an arm and a leg for those of us out of warranty.
Click to expand...

Mine is on its second such failure. Even if you fix it once it keep rehappening every 20-30k miles.
•••
C

My 2016 with 82k miles just started to do this. I bought it used with 4 year warranty, so I’ve got an appointment next week to hopefully resolve. It sounds like a total hooptie driving slow
•••
D

Just joined the club. Mine started two days ago front passenger side. 2020 MX Raven with 28k - just has the second half shaft replacement too :/
•••