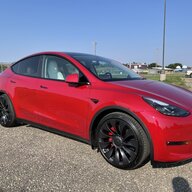 Maddy said:
Has anyone done a HuD upgrade on their RWD model Y in Australia? Is there anyone who does this as a service and any suggestions on the best HUD model to get? Thanks
Click to expand...

That's not a HUD. It's just an LED mounted in the dashboard.
Reactions: Burnt Toast and mike_j
•••
M

Of note almost all the in-dash or dash mounted ones are lower than the speedo on the main Tesla screen.

There are also some more HUD-like ones that sit closer to the glass and project onto a secondary screen, or a sticker placed on the glass.

They are mostly designed as DIY, but anyone who is experienced with stereo installs should find it easy.
Reactions: Burnt Toast
•••

Subtle yet does the basics one needs in regards to necessary info when one needs a "cluster" in front of them rather than the side.
•••
D

Hi all, new to TMC, just became a Tesla owner 2 months ago, M3LR.

Saw this thread, and just wanted to say hi, and just installed my 9" drivers dashboard screen, loving it!
Click to expand...

G'day, keen to read of your experiences and if you want to upload some pics. I've seen mixed reports about these add-ons, I don't think I can bring myself to do it but honestly would love a display right in front if it worked seamlessly.
•••
B

Saw this thread, and just wanted to say hi, and just installed my 9" drivers dashboard screen, loving it!
Click to expand...

Never heard of anyone not enjoying 9"
Reactions: brend0s
•••
C

An observation for those googling HUD Tesla and interested in Hudway for Tesla. Hudway have been taking peoples pre order money for over two years. Estimated delivery keeps bumping 3-6 months down the road.
Last edited: Jan 6, 2023
•••
A

I installed the Hansshow 9 inch display into my 21 MSLR as despite owning it for a year, the lack of front display gave me the irrits. I have to say I love it.

It shows in addition to speed, a bunch of stuff including trip meter, odometer, SOC and distance remaining and it's right in front of you. I was going to buy the Mickey Mouse ears, but decided on this one due to it including apple CarPlay. The main benefit for me of CarPlay is for navigation. The Tesla rarely gets navigation requests the first time, mostly due to the poor voice recognition. CarPlay has better voice recognition for me, and it's smarter.

For example, requesting navigate to Tranmere tennis club using the Tesla gives you a few tennis clubs across Australia but not Tranmere. CarPlay given the same request asks if you want the Tranmere bowls and tennis club. Correct. It's smarter with matches that are not exact.

It's about $4-500 USD, so not cheap. And it's not easy to install in an Intel car. I got it done, but accessing that plug is a PITA. But I believe it's relatively easy to install in a Ryzen car as discussed previously.
My wife on the other hand was not bothered by the lack of centre display, so each to their own.

Now if only they had made a hatch instead of a boot, put lane change warning in the mirrors, 360 degree camera for parking and rear cross traffic alert, the car would be perfect. Now to convince my wife that the acceleration boost is an important safety feature. Pigs might fly.
Reactions: CT3PO, johnchidgey and positiv
•••