How much do you pay for Tesla model Y insurance?
•••
K

Lots of threads about this and everyone agrees, it varies wildly based on many factors. I just purchased mine yesterday. I live in Southern California. Had Mercury for over 20 years. Tesla was cheaper by about $20 a month because I purchased FSD which has its insurance advantages for Tesla. The other thing that they made me aware of (which you are unlikely to find matched anywhere else) is that in the case of a vehicle total, Tesla will include the cost of FSD paid as part of the claim. Big bonus. Also, not widely reported, but there is an option to have another non-Tesla (Prius in my case) covered under the policy as well.
Reactions: kashian
••• 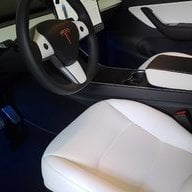 Just compared Mercury to Progressive for my MY and wife's Honda CR-V. Apples to apples, Progressive cheaper for me in NYS. I don't have FSD yet, though. Thanks for the lead, though.
•••

S
Damage my new Model Y when backing :( what are my options?