Couldn't find a previous discussion - point to one if it exists.

Is it just me or is the controller just this poorly executed. Overall, the playback of music from a USB drive seems to be substandard.
My last car was a Ford Taurus Limited with the premium Sony system. Once the indexing was complete (a one-time thing), whenever I switched to USB music, it just remembered where I left off, even if in the middle of the song.

Is this just a poorly executed part of the SW or do I potentially have a S/C visit in my future?
•••

There's probably 100 thread on this, all across the forums, going back to the original Model S with USB playback.

Many of the issues from years ago remain open issues.

FYI that shuffle feature you're having trouble with? It didn't even exist until about a year ago- despite S owners asking for it for many years.
••• 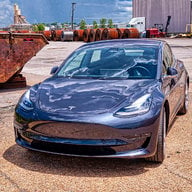 The best thread on all this is over in the model S forum, it's stickied (here - Comprehensive USB Bug List ). And yes, while the usb audio system is extremely substandard, they are actually working on it, little bits at a time. And also breaking things along the way. Maybe sometime it's work at the level of a 2003 era ipod. I suspect they "borrowed" some legacy code from that era for the car - the gaps between tracks are quaint and reminiscent of that period of time.

The music resumption after a power cycle - until about last March it didn't resume at all, ever. Then they fixed it, it worked all the time. Recently, they broke it again. Each of the (3? 4?) v10 updates we've gotten recently had different degrees of brokenness in this regard. The latest one (2019.32.12.2), at first it wasn't resuming after going to sleep ever. But for some reason it started working again for me, has remembered it's place for the last week. Go figure.

Music just stopping, the player just freezing - it did that for a few software versions, but has stopped doing it as of this latest version. Hurray for small fixes!

The shuffling problem - don't know, don't use it.

I have a running list of these little problems in a text file on my desktop, and add to it after every update. And also a list of user features that would be nice, which there are a lot of. And I send feedback to tesla on this, after every update. I encourage you to do the same - they don't read here, but they do read their emails, at least sometime. I use the Request Help form on the tesla account page, also the [email protected] email. You can also use the [email protected] address. I use all 3 or less, depending on how vexed I am at the time. And sometimes I get replies, and sometimes they actually fix the things I bug them about. My favorite fix - in folder view, the tracks used to be listed alphabetically, not by file name, but by the song title in the tag, which would result in crazy wrong orders. They finally fixed this not very long ago - now the files are listed (and play) in track order.
Last edited: Oct 24, 2019
•••

Question for those regularly using USB drive for music playback: