Just like a lot of people on this forum, my Model X was also delayed by around 5 weeks after the scheduled 2 week delivery. During that time, my financing offer expired and I had to apply for a new approval. I had my new pre-approval ready for the MVPA to arrive. So yesterday I got the message that the car is built and ready for delivery. I immediately checked with my SA and he said that if I get approval through Tesla, they will match my new pre-approval. But I had to first get approved by Tesla finance. So I applied with Tesla, got approved and sent the pre-approval details for matching the rate from my Credit Union.
The delivery person got back to me with a really weird message that if I switched now, then they will assign the VIN to someone else and won't deliver the car. WTH!! I was shocked. Few more messages and they finally agreed to match it. HOWEVER, next they want the final approval from my CU which means I have to go through the entire process with my CU. So obviously, it is now taking time for the CU to work on my application and the delivery guys at Tesla have given me a deadline of 4 PM or else, they won't deliver the car tomorrow and assign the VIN to someone else. I am really pissed off at them because I had everything set up well in advance and at each step, they kept screwing. Had they told me that they require final approval for the interest match, I would have just completed the process with my CU and get over with it earlier yesterday and by now I would have had everything set up. What frustrates me most is that they are pinning it on me.

I feel that if they cancel the delivery and re-assign the VIN, I will just cancel the order because it has been the worst car buying experience so far. Sure, X is a great car but at this point, I am no longer excited about it.

Has anyone here been asked about re-assigning the VIN and not delivering the car?
•••

suparn said:
...Has anyone here been asked about re-assigning the VIN and not delivering the car?
Click to expand...

People got their assigned customized cars switched for various reasons.

I agree that Tesla should have all those rate matching rules posted so their own salespeople and customers wouldn't be confused.

But that how it works in Tesla. If you want its car, you might need to know how to jump through these kinds of hoops and have lots of patience.

It's frustrating but once you pass these bureaucratic issues, it'll be very rewarding to bond with your new car.
Reactions: suparn
••• 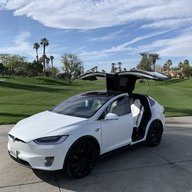 How do I apply?
Send proof of your third-party loan approval to [email protected], within seven days of delivery, along with your reservation number (RNXXXXXXX).

When do I receive my payment?
For a rate match prior to delivery, your loan paperwork will be adjusted to match your third party lender’s rate. For post-delivery rate match requests, you can expect a rebate check within six weeks once your approval is validated.
Reactions: suparn
•••