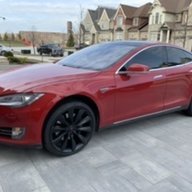 I'm looking to get a used model X, 2016-2018
My question is this:
I’d like to have all the possible technology in it, like premium pkg, and AP2, sentry mode, but some of the used car dealers aren’t posting all the features X has.
When I look at the pictures and I notice X has additional cameras at the front fenders together with Tesla logo, does it meat it has AP2 or not? How many cameras it might have if not all 8 and what kind of features there is if not AP2.
I have an S 2015, it only has AP1 I believe with convenient pkg
•••
A

AP2 started in Q4 2016. It was replaced with AP2.5 which has minor(?) improvements, and now HW3 (the FSD computer). For Sentry and dashcam functions you need AP2.5 or HW3. For some games, decent web browsing, Theater, and maybe a few other things you need MCU2, which was introduced after AP2.5. Build date is the best way to guess what tech the car has, but I don't know the AP2.5/MCU2 start dates. Something like late 2018. The build date is on the driver's door manufacturer's sticker. AP2/2.5 both have 8 cameras. AP1 had only three(?) central forward facing cameras.

My Q1 2017 X stayed fairly up to date for almost two years. Now, its AP2 and MCU1 means it is missing out on some of the newest software features. With FSD payed for we should get an HW3 upgrade, which I hope will enable Sentry and dashcam in addition to the FSD features. MCU1's may or may not end up being upgradable.

If you must have the latest stuff you need MCU2 and HW3 or AP2/AP2.5 plus FSD, which should get the HW3 upgrade. So figure out the start date for MCU2 and don't get anything before that. Nothing I know of that you can see in pictures to figure out the tech. You can always check for Theater in the App menu, but Sentry will show up in AP2 cars, where it doesn't actually record anything to the memory stick. And of course all these abbreviations are mostly used on forums, not the general public and not some used car dealer, who will be willfully ignorant.
•••

Anyone Know when FSD Beta will be available for 2016 AP2 cars?