New issues noticed, wonder what is going on 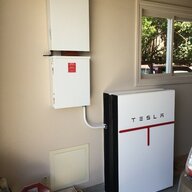 Yesterday I noticed on the iPhone app that there was no solar energy yet my Enphase Envoy, separate from Tesla, that communicates with Enphase with inverter readout on a number of parameters, ac volt and current, temp, dc volt current, etc was showing it was still producing power. The app showed the house was getting power from the PW.

This morning as I type, the app shows all solar power going to battery, zero to house and none from either the grid or solar. Yes, there is real power to the house though. Been like this for at least 50 minutes so far.

Tesla installed a current sensor inside the sub panel breaker where solar is connected on second story. A loop on each wire; makes sense.
I presume this sensor is a powerline sensor even though it has an apparent antenna on it signal is getting to the Gateway via house wiring as the sensor with antenna is enclosed inside that metal subpanel and most likely wi-fi typ signal would not pass through the metal box.

My ultimate question, doesn't seem that solar stopped sending power someplace yesterday even though it didn't show in the app and this morning house is powered even though app shows no power to house.
What's happening?
I am also presuming, irrespective of the app display system is working correctly? Power going to house and batter is charging.
Last edited: Jun 3, 2020

Well, it may be resolved but it was a scary stuff for the first time event.
Called Tesla, very helpful, walked me through a systematic system shut down and restart,
At first he escalated as it indicated house was discharging power to the battery
Now it seems to work properly.
Next time I will feel more comfortable doing this myself, recycle the system.
Now to reset clocks and answering machine that I thought was behind me for the foreseeable future.
Reactions: SMAlset

Well, things are still up in the air. No activity?
Or, only 200 Watts? Never that low even when we are all asleep, about 300Watts+ Dinner time? Power time.
Thought it was all cleared up this morning after I was able to log into the Gateway and start it again as it was off for some reason over night or early in the morning.
At least Enphase is getting it right. 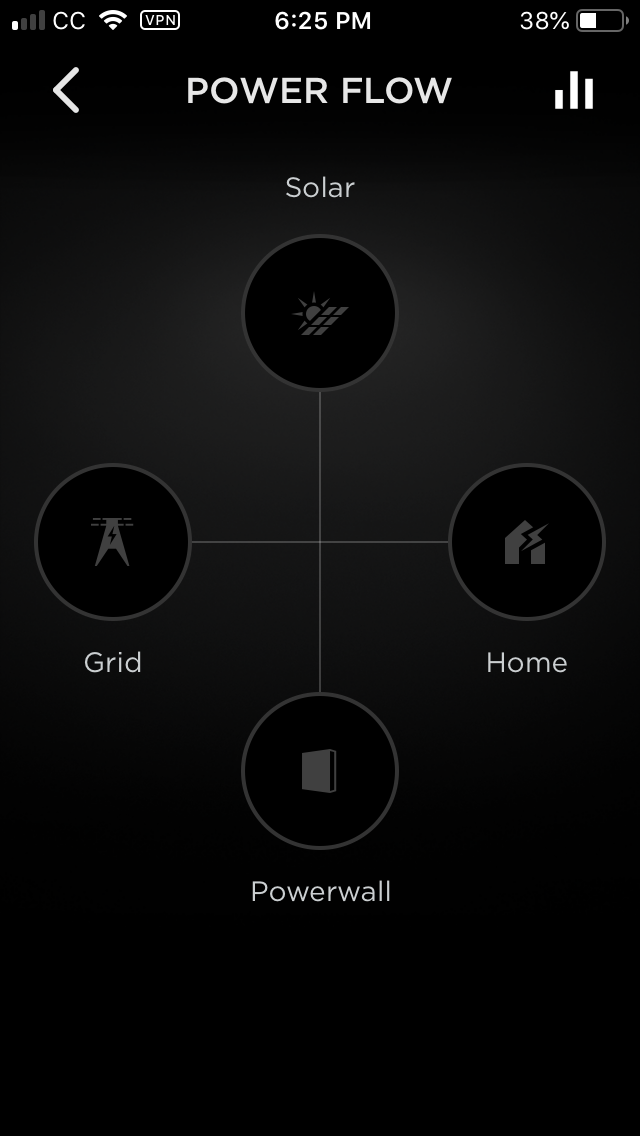 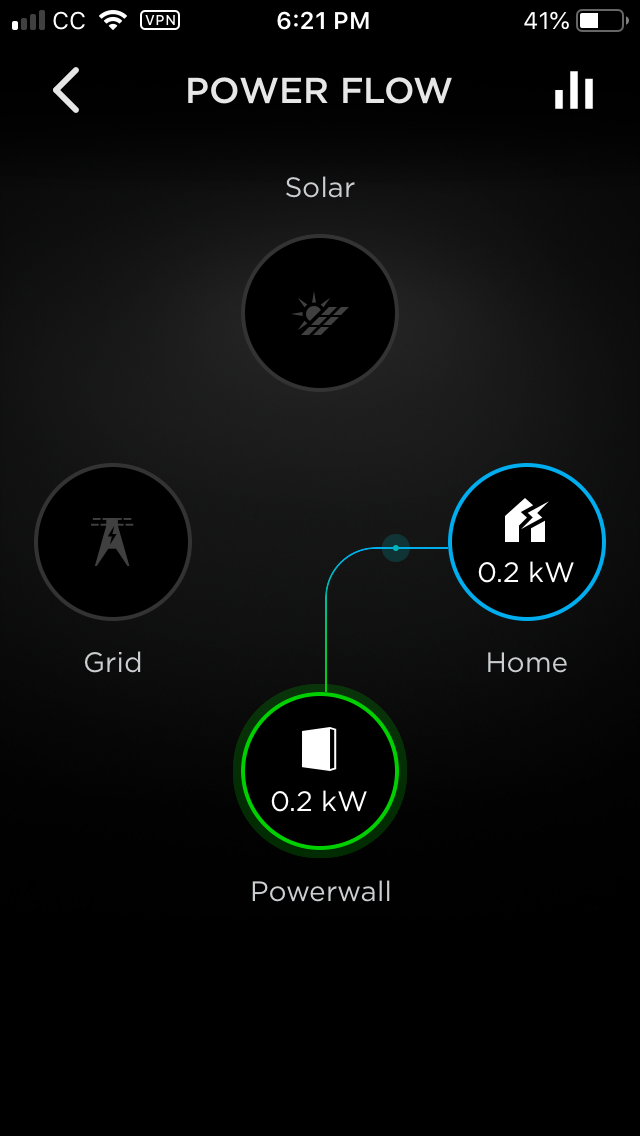 Back to normal operation since Sat about noon and so far today.
I am curious about system memory in that while house energy usage shows activity for today starting at midnight even when wi-fi is down until 7:30AM but phone connection operates, the solar part shows 0 until 7:30 even though sun is up early and panels generate 60W by 6:AM. I would think that would also register as current signal from solar is always on.
S

That is pretty strange.

In our recent PowerWall installation, there are CT's (Current Transformers) around wires from the solar and also those going to the house, I think. The AC current in those wires creates a proportional current in the CT, which, at least in our case, is wired directly into the Tesla Backup Gateway. Multiplied by the voltages, these currents indicate to the gateway the power going to (or from) each subsystem. If that sensing system is somehow disrupted, the gateway will do weird things. Any reading of power coming from the house (the house can not generate power) surely means there is a problem with the CT communicating with the gateway. CT's themselves are simple coils of wire, and hence quite reliable. My Enphase system also uses CT's reliably.

So it sounds to me like yours is a problem in the PW gateway or in the installation.

As for the early morning solar generation, the readouts in the Tesla app are in kilowatts, with only one decimal digit. That means it reads out in increments of 100 Watts. I would guess they round the reading, so 60 Watts would read out as 0.1 kW. If instead they just round down, it would make anything up to 99 Watts read out as 0.0 kW. The Enphase system, in contrast, reads out in single Watts.

It sure is nice to have the Enphase data to cross check the PowerWall!

Thanks, @seedge. Interestingly it worked as it should for the first 2 weeks of installation, then it started to do this king of behavior.
At that early time, 7 AM, Enphase is registering at 127W.
I have a call in will see what happens. The battery does seems to charge and get 100% early afternoon and grid gets charged with leftover energy but still doesn't show at time. So, strangely, it operates but without proper display?
Today, the solar didn't show properly until after 8 AM with 700W+
It's just aggravating.
There is a current sensor in subpanel on 2nd story that has the solar breaker and I think is a powerline sensor using house wire to Gateway or wherever it needs to compute. Not sure how they did the house usage as the backup panel has two 100A breakers for the house as well as the two 30A solar breakers.
Why did it work properly for two weeks though? Promise I didn't beat it.

I think the house power is computed from the solar and grid numbers provided by the CTs and the battery, which the gateway controls. If the gateway gets the wrong solar power number, the house power indication will be incorrect too. If Tesla and Enphase disagree about solar production, that would point at a problem with the gateway knowing what the solar is producing. Sensor, communication, gateway - somewhere along that path.

In a previous house, I had a power monitoring system which used power line communication from CT's in the breaker box to a little internet connected unit. That communication did not like some old compact fluorescent bulbs on my porch, nor a dimmer on a desk lamp. It took me a while to notice that it quit working at sunset each night when the porch light turned on. I had to install filters on those to get the power monitoring working. In another similar case, I put LED bulbs in my garage, but when they were on the remote for the garage door opener wouldn't work - I could open the garage door 'cause the LEDs were off, but couldn't close it. In your case, it might be when a neighbor runs the microwave, who knows. RF is sometimes hard to deal with, which is why I use Ethernet rather than WiFi wherever I can. Ah, I recall using a portable AM radio tuned to no station to track down those interference sources - it would pick up a buzzing sound when I got close.

I just recalled another case, where my installer, unbeknownst to me, broke the clip on a clip-on CT, and used electricians tape to hold it closed. I noticed that my Enphase system, which included solar and consumption monitoring, did not quite compute correctly with PG&E, maybe 10% off. When I opened the meter panel and found the funky kludge, the clamp was not quite closed, as the plastic tape had stretched. I tightened it with a tie-wrap, and after that the PGE and Enphase meters all agreed. I doubt that is your problem, but it is just another example of how incorrect measurements can make for odd numbers.

Your PowerWall probably won't do the right thing if it does not have the solar power correct. For example, it won't charge more than it thinks your solar produces. If it is seeing less solar than reality, the difference will go to the grid rather than your battery. Your house consumption will be shown as oddly low, and your battery won't charge as quickly as it should. It sure seems that, your installer needs to make it work correctly.
Reactions: charlesj

Thanks again.
I had that garage experience with wife's car opener. It worked for a good while, I guess since she brought it home. The, it didn't want to open as she did up to that time. The maker suggested the led but had them in place well before the issue. I just lengthened the antenna by 6" and it is working again. My side, same opener, led, no issue.

My CT sensor has what looks like an antenna but how can that use wi-fi inside that metal box? Perhaps the power cable is the the means?

Also, garage lights were/are not when it has shown these glitches not the light by the sub panel.

Well, three weeks after installation city inspection completed and a few days later that box was checked off in the account.
I thought from there we are on auto pilot.
Wrong thinking. A good many days later I checked to see if power company approval was posted. To my surprise they wanted a copy of another power bill, no email was sent to notify that there is this to do. Good thing I checked or this would have been open forever.

Then, there was another document to sign. Finally.
Wrong thinking again. That document was not visible and the time out wheel was spinning like crazy.
Called, they resent the same thing and not the document by email. Sent email this time.
Today the link to that document is there but it is inactive, won't open.
Called again, after 18 min the phone rings and the survey questions come.
What next? Only half the document comes through?