We have had our MYP (and first Tesla/EV) for a little over a month now and thought I would share my impressions and experiences thus far. I did a lot of reading and researching while (patiently) waiting for delivery both here and elsewhere and as anyone here knows there are a lot of different experiences and expectations based on the individual's perspectives - which is fine. These are simply my perspectives based on my experience and expectations. Nothing more. Nothing less.

Delivery: As the signature says we took delivery of an MSM MYP in early August and was excited but anxious given a lot of the mixed feedback on quality, service, etc.(for the price). My first experience at the service center was positive if not a little chaotic. They were very busy when we arrived. They had to sign the paperwork for the trade-in and final purchase and then took us out to the car and let us look it over for issues and said to let him know what we found. The only thing found at the time (and they didn't rush us) was a scratch on the lift gate. He took pictures and logged it. Later that day I made a service appointment for that AND to have the steering adjusted to dead center (it was slightly off center to the right when driving straight without any pulling that would indicate an alignment issue). For various reasons (my own schedule) the scratch and steering wheel issue were taken care of in early September. No cost. They had the car for a couple of days since it had to go to the paint shop they used (which was backed up), but the scratch was fixed perfectly as was the steering wheel centering. All-in-all a positive experience with my first Service Center exposures. I would also add that given that our order date was April 28 I was not expecting the mobile charger (nor the credits folks are currently receiving) but was pleasantly surprised to find not only the mobile charger in the cargo area but the car also had front mud flats and PPP installed on the bottom of the rear doors! Bonus! 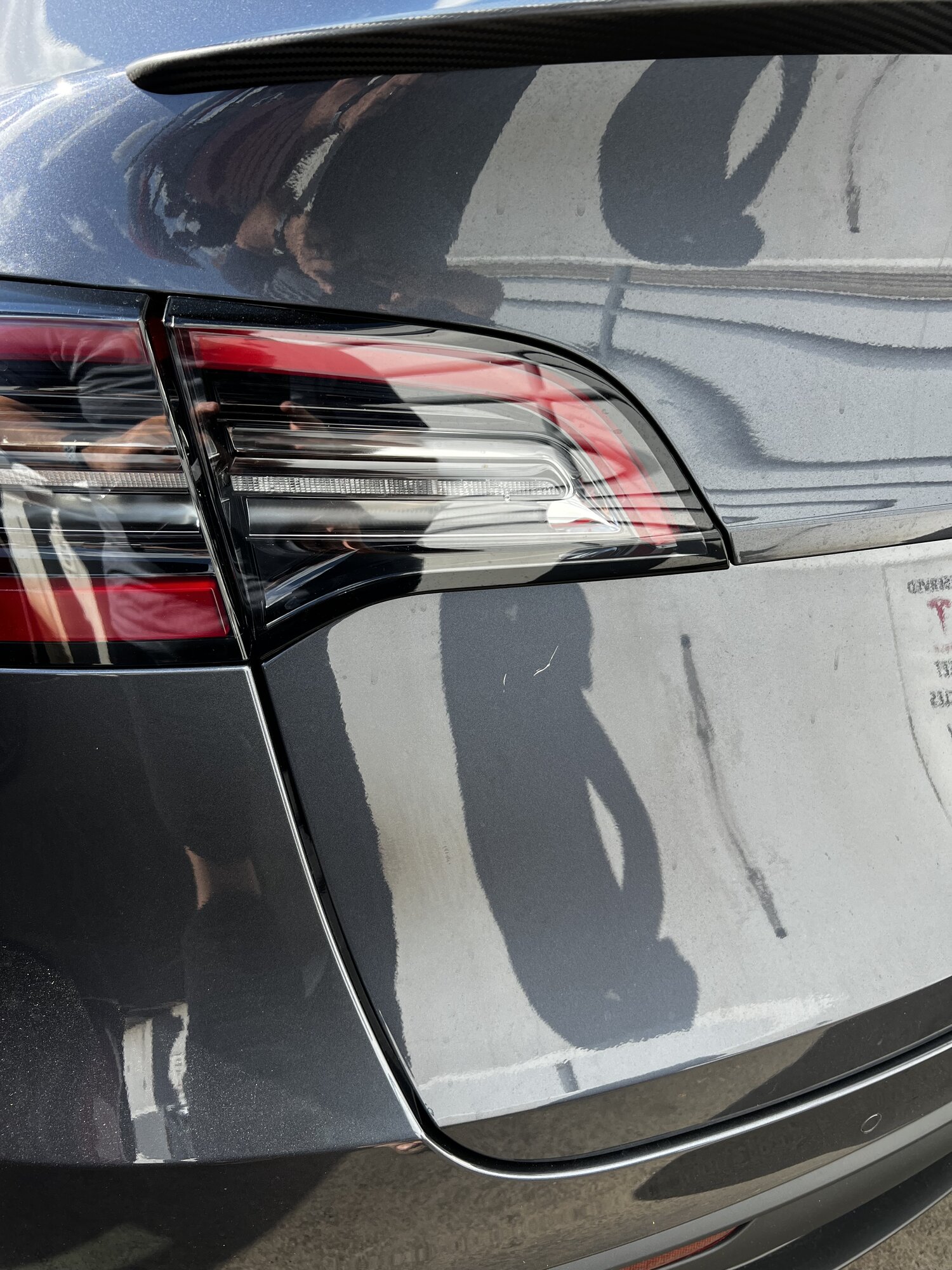 Driving: Other than a short test drive before ordering we had never driven in an EV (we have a Prius V as our only comparison) and amazing is probably an understatement for how much we love the acceleration, speed, and handling. I had a lot of concerns with the ride being rough given the discussion here, but I am not unhappy. Is it rough? A bit, but not out of line with what I would expect for the car knowing it is the performance trim with big wheels. We also were not coming from anything that has what I would call smooth rides (Prius V and traded in a 13-year-old Santa Fe). Over the past 1.5 months I have only come to enjoy driving the car more and more. We have done a few longer trips (400 round-trip, 200 mile round-trip) and find it comfortable, quiet, and relaxing with Autopilot (more on that in a bit). All things considered it does ride rough when compared to other "luxury" cars but given my expectations of a sportier suspension would bring (and probably some of the experiences here) it was well within, and maybe a bit better, than I was expecting. I will just add that while it took a few days to adjust to there is NOTHING better than one-pedal driving and I find going back to the Prius an awkward shift to two-pedal driving AND the lack of umph the car has in general.

Autopilot/NOA: I purchased the FSD package but am still waiting on the beta (fingers crossed that is soon). I have used AP/NOA for both interstate drives on road trips, some non-interstate highways and even some in-town stop and go traffic. In general, I find it surprisingly good. I haven't experienced what I would call phantom breaking at all with almost 1200 miles driven on AP. There have been slow downs but 99% I can easily attribute to a car parked on side of road, or a car or truck creeping into my lane or some other situation where it would make sense for the car to react. And when it has reacted it hasn't slowed down abruptly and/or significantly (i.e. slammed on the brakes). It slows down 5-10 MPH. I hit the gas or take over but nothing that has freaked me or my wife out yet. There are places with heavy traffic and unique traffic patterns and merges that have led to me needing to take over. I have since started to just take over in advance in some of those situations. Not that I don't let it "try" sometimes to see how it does, but rather just to keep moving and from having to take over late. I will be curious to see how FSB changes its behavior. On road trips NOA definitely makes for relaxing drives with very little weirdness. I do think it could do a better job picking a lane and staying in it (I have it set to move out of the passing lane) but that is maybe more of a nit or my driving style than anything else. About the only other thing I would say is that it doesn't always pick the correct lane early enough. But all-in-all given some of the horror stories I have read around phantom braking and the "behavior" of the car I have been impressed and happy with AP/NOA thus far and has me excited to try FSD when I get it (currently have 96 Safety Score and it hasn't been difficult for us to keep it there).

Range Anxiety: None. Zip Nada. Ahead of our trip from Portland, OR to Bend / Sun River I did a lot of planning but ultimately the car's nav, energy estimates, and charging stops were just fine. The SC network is great. The only thing I adjust for (and hopefully Tesla adds this to a future SW update) is for arriving SoC. Day-to-day there is never any issue and even on some of the longer day trips we have done I have been pleasantly surprised that I haven't had to charge at all before getting home (we have a Tesla Wall Charger). With the J1772 adaptor, the Mobile Charger we unexpectedly received with the car, a 15-50 adapter, and now the ability to get the CCS I just can't see any concerns with range. The kids are more than happy to play a game or watch something while we charge for 15 minutes and taking a driving break every 2-2.5 hours is perfectly in line with our ICE roadtrips with kids. 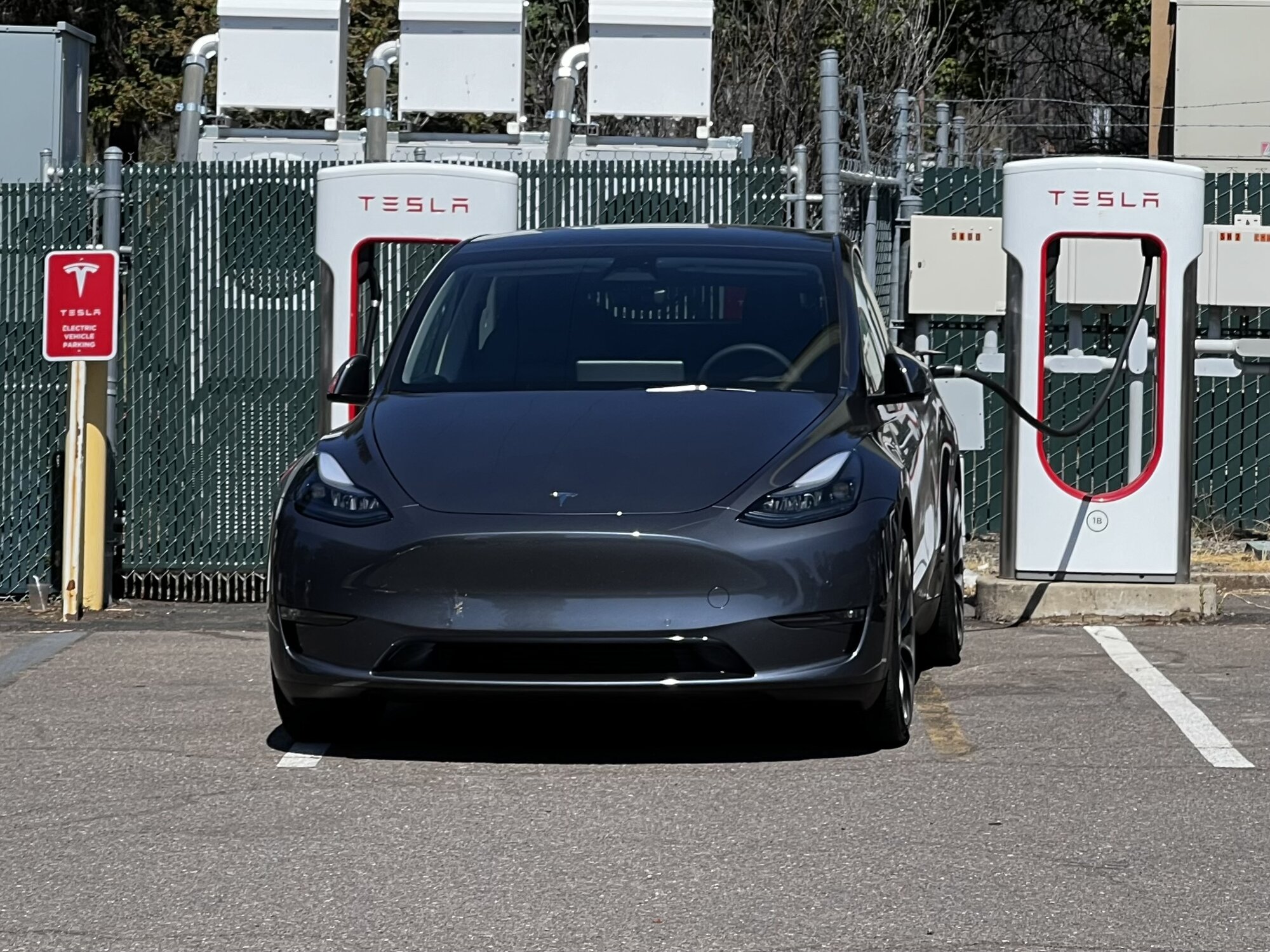 Some of the little things: There are a few things that I would put on the negative side, but nothing to spoil my overall impression or satisfaction with the car. Agree that there are some minor issues with build quality (minor panel gaps, some interior trim items where things are not perfectly flush or aligned) but it really is nit-picky. I find the lack of Apple Music or SirusXM app a bit annoying but easy to work around via bluetooth. The auto headlights and high beams are "sensitive," but I have found that while my choices would be different the car's aren't "wrong" 99% of the time and am getting comfortable leaving it be. Every once in a while the car either doesn't fully adjust to my seat and steering wheel settings (if I toggle off my profile and back it does get it right) or after adjusting it immediately adjusts back to Easy Entry (which I find a nice option/feature but not sure why it switches back). But overall there are precious few things I dislike about this car. Curb rash is an issue with the 21" uberturbines. and being black doesn't help. If you don't touch it up it will show. I did get a touch-up kit and it works well enough that you don't notice unless you are looking. I also think that there is a bit of price premium for "Tesla" that the fit finish don't quite align with. But given I am not coming from a BMW or something similar it doesn't rub me as bad as it might otherwise. I like the spartan interior and given my MYP didn't have the build quality issues some have (not saying they are not real - I got lucky) I don't feel like it is a terrible price/quality trade-off. Add in the SC Network and I don't feel bad at all about dropping what we did (setting aside the price of FSD which I fully admit is a "me-being-a-geek-and-wanting-it-knowing-it-is-overpriced" decision).

Parting thoughts: Some of the other concerns and issues I have read about here either haven't been an issue or I don't find "annoying." Things like: the automatic wiper sensitivity (yes, a bit sensitive maybe, but so long as the wipers are cleaning the glass well and smoothly with no streaks or "rubbing" dry glass I haven't been annoyed); rattles or noises (none that I have noticed); overall battery health / range concerns (haven't seen anything to give me pause and I stick with the advice of leaving on % not miles). The only grievance I have is that 2 days after delivery my son knocked a lamp over in the garage and put a small dent in the front driver-side panel over the wheel. Dings are bound to happen but really... 2 days?

Love this car. Can't wait for FSD. And when the Prius is done it will be replaced with an EV and right now it would be a Tesla. 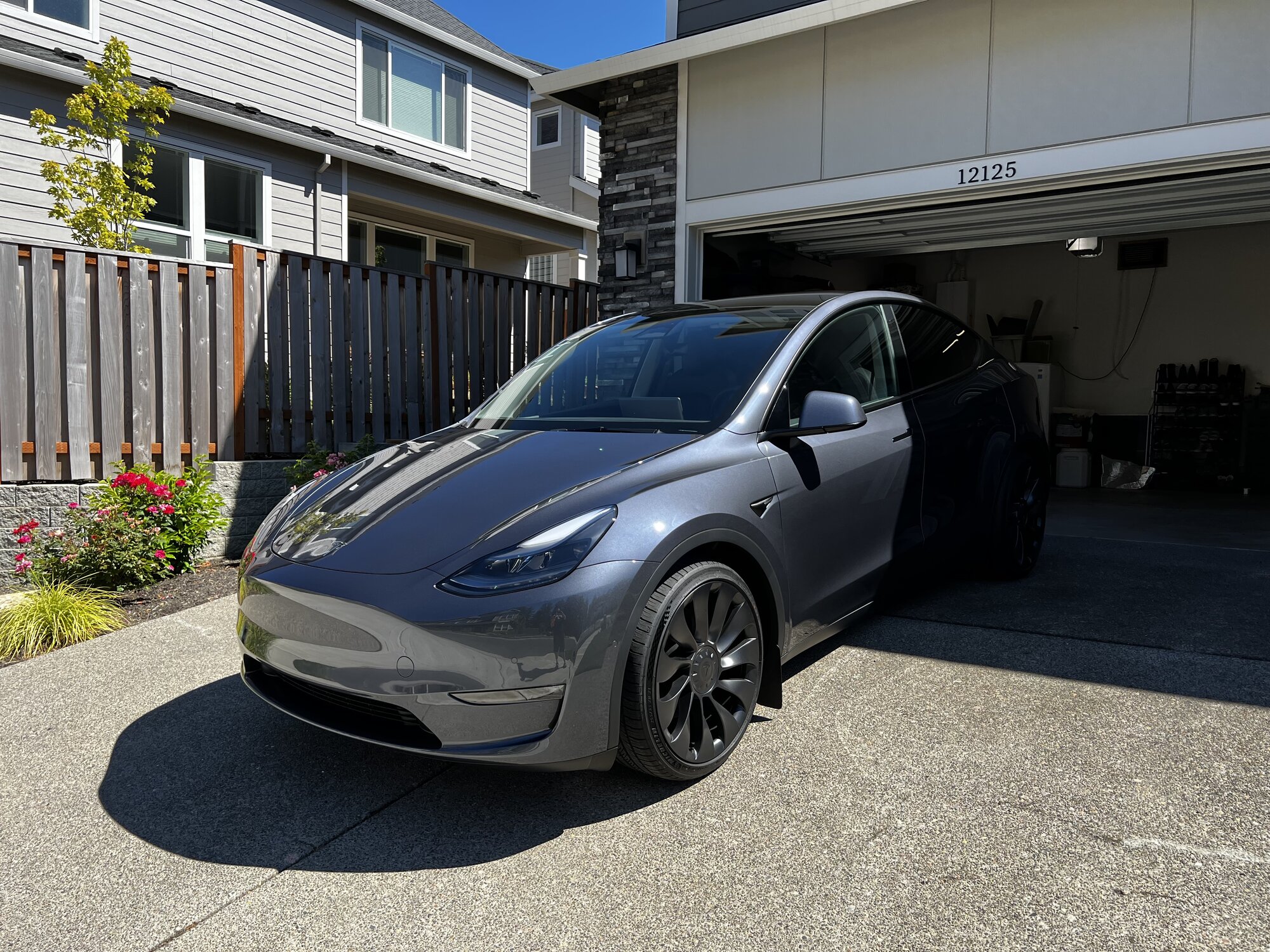 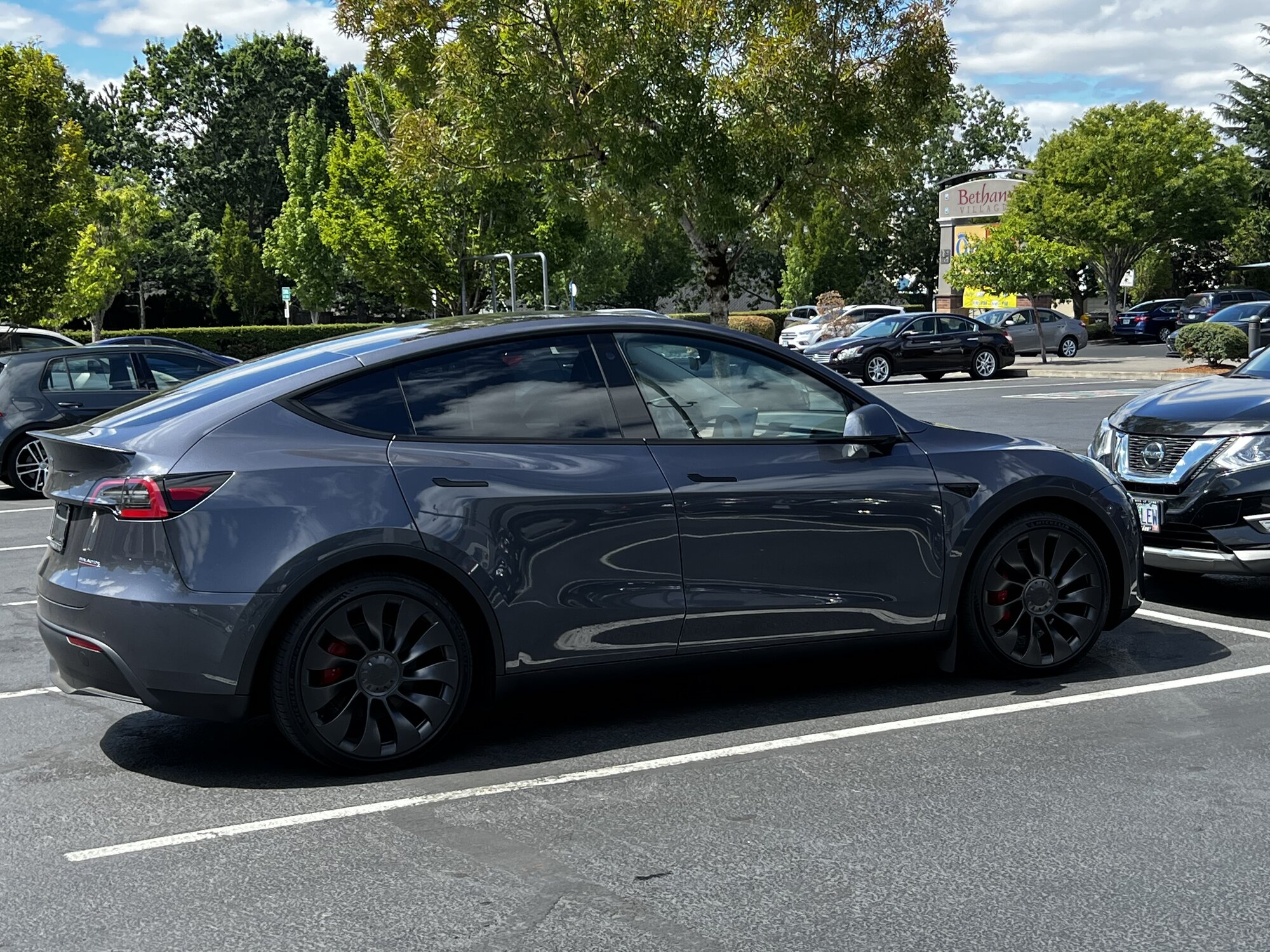 Great write up! I will be doing one similar when ours hits the one month. Don't believe it will be this great but will try to follow your guideline.
•••
Z

Thanks for the great write up. My experience and thoughts were very similar, including being in Portland and coming from a Prius.

Zalick said:
Thanks for the great write up. My experience and thoughts were very similar, including being in Portland and coming from a Prius.

agreed with the coming rain.
•••
Q

Zalick said:
Thanks for the great write up. My experience and thoughts were very similar, including being in Portland and coming from a Prius.

we are having issues/and or adapting to the auto wipers as well... funny we are also coming from a Prius(which we kept) as well..