Zabe said:
Same thing tonight powerwall's did not start charging at the off-peak time which is set for 00:00 - 15:00, they are just sitting at 67% in standby. I double checked my time based control settings and they are correct. Is this a known feature/issue? It seems to me that as soon as you hit off peak the powerwall's should start charging. I will leave them alone until later today and see if they do eventually charge on their own at some other time during off peak.
Click to expand...

I have a non-solar grid charge set up too and noticed some very odd behavior on Thursday and Friday last week where the batteries appeared to be discharging into the grid! Not the home, the grid! According to my contractor who finally called me back on Tuesday, Tesla rolled out some type of firmware update last week which started causing unpredictable behavior impacting the Gateway's ESS isolation circuit.
You could try doing a hard reset of your gateway (pencil in the hole on the front panel) and then logging into your batteries wifi directly from a PC and seeing what they think they're doing. When I logged in on Friday or Saturday (when I discovered the issue), I actually had to start the system up again. I think there is some info on Tesla's website about how to log in to your batteries directly. You should be able to see a TEGxx wifi hub when you look for networks close to your batteries and this is the one you need to log into. Once you have logged into the gateway's wifi, you can type https://192.168.91.1/password into your browser and just follow the prompts to set up a password and log into them directly.
According to my contractor, Tesla was trying to roll back this update. I'm currently using the 21.13.2 version that was released in May.
All is working normally again for me as of Tuesday this week. I switched the batteries back on with the ESS isolation switch after the contractor's technical support finally got back to me. I was uncomfortable leaving them 'live' when they appeared to be discharging into the grid according to the app and not powering any of the home's load as this isn't an expected behavior. They just sat there 100% charged like yours did for a few days while I paid through the nose for premium priced Kilowatts between 4-9pm during a heatwave....... 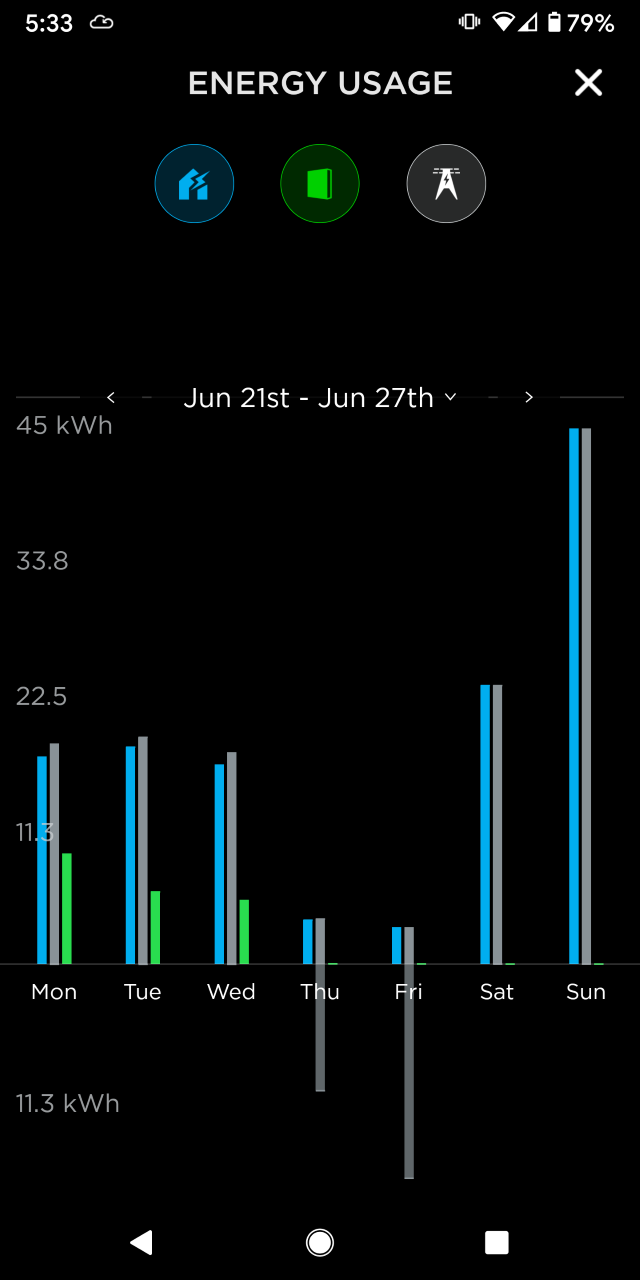 I am on version 21.20.2 I have been manually recharging during off-peak by selecting back-up only. After the recharge I return to time-based control and the powerwall's discharge correctly across the peak. I sent my installer an email letting them know they might need to roll back to 21.13.2 so that I don't have to manually change the setting 2 times each day.
Z

I have been rolled back to version 20.49.0 the issue with the powerwall's going into standby mode in time based control when the off peak time is hit is still an ongoing issue. I have to switch the app to backup-only for the powerwall's to charge from the grid, and switch back to time based control so that they serve my load over the peak. I have contacted my 3rd party contractor, Tesla energy support and have been assured that I am at tier 2 support. Unfortunately tier 2 support does not seem to want to actually talk to me and attempt to resolve the issue, in fact on one of my phone calls it was reported that tier 2 support is not "customer facing" made me laugh because the recording while you wait says to make sure that you are at the location of the device so you can assist in troubleshooting.

I suppose my next stop is both PG&E SGIP program and CPUC to report the issue. CPUC earmarked something like $613,000,000 for SGIP battery installs, you would figure that would be enough incentive to make the batteries do what is required by the SGIP agreements...charge off peak, discharge on peak
Z

SGIP Incentive rebate check has been issued. I am really surprised as to how quickly that happened.
Reactions: BGbreeder
T

Zabe said:
SGIP Incentive rebate check has been issued. I am really surprised as to how quickly that happened.
Click to expand...

H
When does your rate plan change to TOU? [after PTO with solar - PGE]

Which is the best PG&E TOU Rate for New Installs