First looked ONLINE (e.g., Craig's List, eBay, Amazon, etc.) for bargains on new or near-new rear tires.
I next tried retail BRICK-AND-MORTAR tire sellers (e.g., America's Tire, Les Schwab, etc.) in my area.
Finally, I tried TESLA. (Arguably, this could have been my first step. But I had been initially hesitant because of imagined hassle and cost. Ironically, I was partly right.)
"New" versus "Old" Continental Model X Rear 20-inch Tire Comparison

In this case the change to the Continental CrossContact LX Sport was most obviously to the acoustic foam. (I assume the denser foam is more efficient at road-noise reduction?) I suppose there could be other subtle, unseen tire changes, as well (e.g., to rubber composition or ply design).

As usual, I'm not the first to discuss these topics. For example, see Tyres with the designation 'TO'

BTW, there is (very minor) debate on whether it is "T0" (with a zero) or "TO" (with the letter "O"). Some say it is a zero, but many say it stands for "Tesla Original." Both interpretations make sense. Some car-manufacturer designations clearly do use the letter "O" (see list in Continental Original-Equipment Tires). So confusion is understandable. For Tesla, since the numerical sequence can be a real thing (as it is for the "N0", "N1" etc. series of Porsche), and the round symbol used is relatively narrow (if you look closely), my money is on it being a zero. Either way works.

I meant to include a poll on tire choice; here is one: Choice of Model X Tires.

When I was visiting the brick-and-mortar tires stores I asked what the red dot meant on the sidewall of the Continental tires. Very few store employees I spoke to knew the answer. I am not 100% sure, but I've read (e.g., tires-easy.com) that it indicates the lightest point of a tire. If true the wheel's valve stem would be lined up with the red dot on the tire, but based on what I've seen few tire places bother to do that since tires are (harmonically) balanced anyway.

A more sophisticated story comes from this pdf document (for Continental UK and Irelandtires--note the different spellings) which may also be applicable for North American tires: "Coloured Dot" Markings on the Sidewall of Car Tyres. According to that 2013 publication the red dots (a) can easily wear off (so best to look for on new tires), (b) are mainly found on "OE" (original equipment) tires (supplied to Tesla and other car manufacturers), and (c) indicate the “radial force variation first harmonic maximum” (yipes!). It "shows the high point/stiff spot location" ( according to What RVF Means) and is measured for OEM tires supplied to car manufacturers in order to help guarantee new tire uniformity and reduce high-speed vibrations. I'm not a physicist or engineer, but I'm guessing this is determined with high speed spinning on sophisticated equipment? In this description, tire manufacturers would be sure to mount the red dot against the low spot on a wheel rim, therefore helping to ensure uniform roundness of the wheel-tire pair. OK.

That's definitely a zero, for the reason you stated and also because DOT requires font differentiation between 0's and O's.
Reactions: tps5352 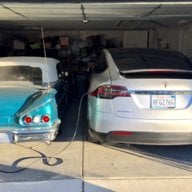 Thanks for your detailed reply. I have a better fund of knowledge now!
M