hello, new to the Tesla family. I have a question on home charging. I installed a 14-50 outlet on a 40amp breaker. I know we can only can only reach 32amp input. My question is, if I use the Tesla wall home charger that reaches 48amp ( I know I need to switch my 40am out to a 60amp) but will my Y SR, get more than 32amp charging on the tesla wall charger. I herd that my Y SR can only charge at a maximum rate of 32amp.
What threw me off is when I charge at a tesla supercharger it was ripping. I was getting a lot more than 32amps. 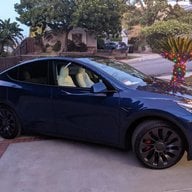 When you DC fast charge (DCFC) the AC>DC conversion is done by a HUGE power supply somewhere near the supercharger, usually screened off from view. This has a large conversion capacity and an enormous heat sink to dissipate the energy lost to heat in the conversion. When you AC charge from any source, you are limited by the power supply in your vehicle, which is much smaller and has a finite capacity of 48 amps, depending on your model (max was 72 amps for the model X). IDK if the SR has a 32A max, better to check that with the forum.
Reactions: rjpjnk
•••
S

Two things — supercharger charging is totally different, it’s true DC charging and bypasses the car’s internal charger. There’s a reason they call it supercharging. Home charging is done by connecting an AC power source — hence the official name of Wall Connector (and not charger) — and then using the car’s electronics to convert that AC to DC for charging. Your circuit breaker needs to be sized for the household wiring. You can’t just put a 48 amp Connector on wiring good for 40 amps, to do it properly the wiring needs to be able to handle 60 amps. You can use the wall connector with the existing CB and wiring and software limit it to 32 amps.
Reactions: Rocky_H
•••
J

When you charge at home or at a public (non-Supercharger) charging station your Standard Range Model Y is limited to 32 amps. As previously stated, when you are charging using a Tesla Supercharger station the Tesla Model Y's on-board AC-to-DC converter and on-board charging equipment is bypassed. The 40 amp circuit you currently have is all that you need for using the Tesla Mobile Connector with the NEMA 14-50 power plug to charge at 240V and 32 amps (the highest charging amperage your Standard Range Model Y can draw when charging (other than when Supercharging.)

Reasons to consider the Tesla Wall Connector include:

Can charge at up to 48 amps (on a circuit with wiring rated for 60 amps, assumes the Tesla vehicle can charge at more than 32 amps.)

Does not use a plug/receptacle, designed to be hard wired into the circuit. When installed the Wall Connector is fully weather rated for use in all weather conditions, with no power plug and receptacle where water can get into the power connection. The Wall Connector can be installed outdoors with no weather issues.

Only requires two powered wires in addition to a ground wire (no neutral wire is required, used.) The two wire run can save some cost during installation. For example, you would have the electrician install 4/2 wire instead of 4/3 wire (if 4 gauge wire was used.)

Tesla has stated that, in the future, the Wall Connector will be able to support load sharing so that two or more Wall Connector units can be installed on a single circuit.)
Last edited: Mar 26, 2021
Reactions: rjpjnk and tbwnm
•••
S

Thank you everyone, so conclusion my T SR, will only allow a maximum of 32amp even if I bought a Tesla wall charger hooked up to a 60 or 80amp ( just for an example) my Y will automatically convert to 32amps. Alright that is acceptable for night charging.

thank you everyone
Reactions: brkaus
•••