The Tesla VPP for NSW, when used in the Ausgrid network, is taking advantage of a special Ausgrid trial tariff.

Network distribution companies such as Ausgrid normally charge energy retailers for energy consumed, such as 6c/kWh off-peak and 25c/kWh peak. However, this special tariff is an attempt by Ausgrid to encourage households with batteries to EXPORT during peak periods (2pm-8pm). To encourage this, they are PAYING the retailers for energy exported. Note that this is separate to the money that retailers receive from selling the energy on the Spot Market.

The Tesla VPP for NSW with Ausgrid is using this payment to encourage consumers to export during the Peak period. Tesla will tell your battery to export after 2pm so that this feed-in tariff is earned for the household (and so that Tesla earns income from Ausgrid and the Spot Market). The feed-in tariff ONLY applies during the afternoon Peak (which applies every day of the year, including weekends).

Here's a snapshot from my Home Assistant monitoring of my Powerwall (sorry for some missing data in the middle): 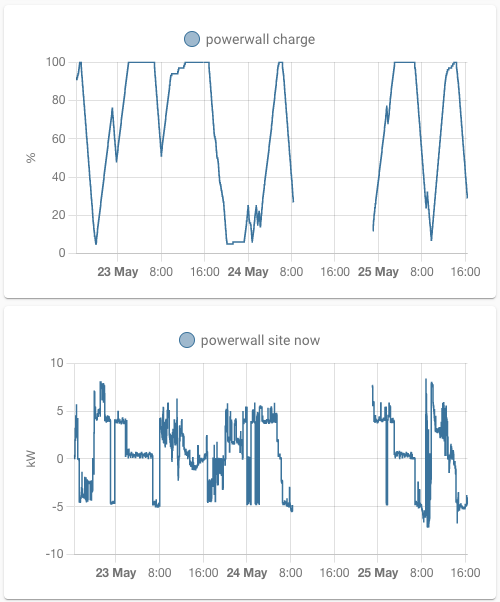 This has been during a wet period with poor solar generation. Therefore, it seems that Tesla is commanding the Powerwall to charge the battery in the early morning or prior to Peak, so that it can export the maximum amount during Peak.

With a non-peak charge of 22c/kWh and an export of 33c/kWh, it means I can earn 11c/kWh. If it exports, say, 10kWh, and my battery is completely filled via solar, then it can earn me about $11/day. However, if the battery is filled from the grid, it earns me about $1.10 per day.

On 25-May-2022, however, it seems that they filled the battery from the grid in the early morning. Then, it was exported during the morning demand to earn Tesla some money by arbitraging the energy market. The downside for me is that I had to pay 22c/kWh to import the power, but get no feed-in for exporting the power. Then, later in the day they filled the battery again (at my cost), and exported it in the afternoon. The net impact is that I would have paid to fill it TWICE from the grid (assume 10kWh x 22c x 2 = $4.40) and the feed-in would earn 10kWh x 33c = $3.30. So, I actually LOSE money that day due to their double-filling of my battery (plus the impact on battery lifetime).

I'm hoping that this is an isolated incident because there is no benefit for me to have them export my power in a non-peak period.

Anyone from Tesla Australia who would care to comment?
•••
E

@Fermax you'll need to look at wholesale rates to understand why they are charging your battery.

For example, this morning the wholesale rate was relatively low at 13-14c per kWh between 3-4am while it was 37 cents at 7-8am.

So they're trying to discharge in the morning in addition to the evening if they get the chance. That's going to get expensive for you if they keep exporting in the mornings when you get no FIT.

I'm with Amber and always exposed to wholesale rates and so would do the same thing using my own automated trading solution - double arbitrage each day if the spread is large enough. However I get to keep all arbitrage profit. Unfortunately Amber isn't on the Ausgrid two-way tariff trial which I understand technically starts on 1st July and sees Ausgrid pay the peak TOU networks credit (25c ex GST) to retailers.

Be aware that wholesale rates in the market are hovering over 35c in the early evening. So Energy Locals are earning over 60c when they discharge your battery into the grid at night. If your meter is fully exposed to the market they need to use that profit to cover your off-peak consumption which will usually cost them ~30 cents from 10pm-6am while charging you only 22c.

So, somewhat swings and roundabouts but it's clear that Tesla/Energy Locals are trying to maximise the income from cycling your battery. Hopefully they recompense you where their behaviour ends up increasing your bill relative to if you were on a non-VPP plan.
•••
C

Fermax said:
The downside for me is that I had to pay 22c/kWh to import the power, but get no feed-in for exporting the power.
Click to expand...

Are you sure you get no feed-in at that time? The plan document just says "30c/kWh" with no mention of a time (I know the pricing box on the web pages says 2pm - 8pm).
••• 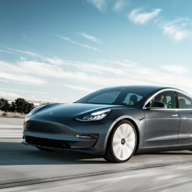 The response states that GreenPower can be added to the VPP plan. See screenshot.
View attachment 807755
Click to expand...

I've now been told by Energy Locals this is not true... waiting on another Support response.
•••