Hey all. I ordered my M3LR DBM 18" on April 17th. My SA has been super nice to me answering questions in English. I went to Bundang-gu for my test drive and she was assigned to me for English speaking. She has even helped me place orders for some accessories, which was awesome of her.
Looking around the forums I have noticed that Japan doesn't seem to get EDDs like Korea, which that is fine because my SA said it should be a 5 month wait with my configuration (her experience). I called her yesterday after about a month of no communication and she said they are still taking deliveries from last year! Tesla Korea won't know how many VINs have delivered until next quarter - Beginning/end of June? She said she may be able to tell me next month what is happening. I'll update this more when it happens so there is an updated account of what happens when you place an order with Korea Tesla during post-pandemic/Ukraine shortages.
TLDR: If you are in Korea, expect complete darkness on your delivery for several months in anticipation. Get a polite (all I know of Korean SAs) English Speaking SA to calmly explain the process so you don't lose your mind looking at the app/email for an EDD.
••• 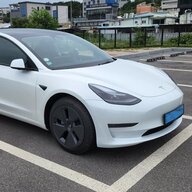 Hey,
I'm also based in Korea. I've ordered M3 SR+ back in September 2021. I was told the car should arrive Q1 2021. In March I called customer center and was told the car will most likely arrive in June or September by latest. Now less than a month until September and there is still no VIN or any word from Tesla.. It's soo damn frustrating...
I did see that the new shipment of cars arrived to Pyeongtaek on 29th July, so fingers crossed we can finally receive our cars.
•••
R

My SA texted me saying oders placed Jan/Feb 2022 are being delivered in the next few weeks. So if there is anyone out there that ordered around that time, your delivery may happen soon. She told me she hopes next quarter will be my delivery,

I was also informed that orders past my OD (April 17) will not be receiving a free Mobile Charger. I guess I got lucky.
•••
R

Wow! You have definitely put in your waiting time! Just curious, where did you see the shipment to Pyeongtaek? I hope yours is in that shipment.
•••

This spreadsheet is tracking ships that are carrying Tesla's. As you can see, there is a ship that arrived to Pyeongtaek few days ago and there is also ship that arrived to Gwangyang today, which I presume are Tesla's for southern part of the country.
I'll call customer service tomorrow and see if they have any info regarding SR+ deliveries.

I checked few cctv's on Sunday and did spot a truck that was carrying Teslas out of the Pyeongtaek port (attached picture).

Called Tesla earlier today and asked about the car. They told me that car has not been assigned this time and that they don't know when my car will be shipped to Korea... They couldn't even give me an approximate date. So yeah, it sucks, I feel very disappointed...

I checked Tesla inventory (for Korea) earlier today and for the first time I've seen that they actually have few used cars for sale.
•••

Congrats! I gotta say, that cctv is another level. I'm not seeing the spreadsheet though. It is so unfortunate that your order took so long. Thanks for the info as it has been eye-opening and I'm starting to lose hope that my order will even be fulfilled this year. I'm genuinely impressed by your patience.
•••

Thanks!
You can also search for "@FMossotto" twitter account, he usually posts information about current and upcoming Tesla carriers.
Back in 2021 when I ordered Tesla, the price of the Tesla SR+ was still 54m won (now 70m won), so therefore I'm still eligible for 9.2m rebate. Honestly, if It wasn't for the low price and rebate, I wouldn't have waited almost a year. I would most likely choose Ioniq 5.
Tesla is ramping up the production and majority of the cars coming to Korea are LR models, so I don't think you will have to wait as long as I did
•••

I finally took the delivery of Tesla model 3 yesterday!

Soon after we received VIN for the Tesla, we had to do all the paperwork for the delivery until 19th August. Long story short, it was nerve wracking... Holiday, weekends and our assistant being on a holiday until 18th, made us very nervous we won't be able to deal with everything in time. But luckily assistant came back early and we were able to solve everything within a day.

Yesterday on 29th it was finally the delivery day. In the morning 10am, we headed to Gwangmyeong IKEA center, where Tesla has it's parking area. Parking center is HUGE and there were hundreds of Tesla's parked there ready to be picked up by the owners. Inside the office we were given the key cards and had around 30 minutes to inspect and take the car (I don't think it would be a problem if it took longer).

Inspection of the car went smoothly, there are few slight gaps and misalignments and also the panel underneath the trunk doesn't seem to be properly painted, but it is not an issue for me personally. There is just one slight annoying "problem". The navigation voice is always in Korean language and there doesn't seem to be an option to switch it to English. It probably can be fixed at the Tesla center, but since I know basics of Korean, it's not a big issue for me personally.
Car comes with J1772 adapter, so suggest ordering CCS1 combo adapter beforehand since there isn't many superchargers yet. I've ordered mine on Tesla's website and it took few days to arrive.

I've done around 200km so far and car is absolute joy to drive!!!

Congrats! That is great information to have. I'm glad it went smooth with yours and not too bad of defects to completely turn it down. I hope we can get the GPS language to English, as another thread on here says they were told to go to the service center, but the thread died and no further info was given if it was even possible. If you happen to get it done, I'd appreciate it if you could let me know. Thanks for the info and enjoy your new M3!
•••
X

I took delivery of a Model Y in June. Took about a year from order to delivery.

I’m curious - what map do you use for navigation. I find the Tesla (based on TMAP I think) is too simplistic for the multi-lane Korean road system.
•••

Thanks ReTri! I will let you know if I decide to change the nav at the Tesla center.

My current solution for the navigation is to primarily use Kakaomap navigation from my phone and combine in with the Tesla nav. It's a bit time consuming to set everything, but for a longer trip, it's definitely worth setting Tesla nav in my opinion, so you can manage charging stops accordingly. Also tesla nav doesn't seem to have any info regarding speed limit cameras, so having kakaomap navigation is kind of necessary anyway
•••
X

DinoRx said:
Thanks ReTri! I will let you know if I decide to change the nav at the Tesla center.

My current solution for the navigation is to primarily use Kakaomap navigation from my phone and combine in with the Tesla nav. It's a bit time consuming to set everything, but for a longer trip, it's definitely worth setting Tesla nav in my opinion, so you can manage charging stops accordingly. Also tesla nav doesn't seem to have any info regarding speed limit cameras, so having kakaomap navigation is kind of necessary anyway
Click to expand...

Thanks - it seems we do something similar then. I run TMAP on my phone to get the lane guidance and speed camera locations. I run the Tesla map in parallel.

I can't get the share from Naver, Kakaomap, TMAP to work with the Tesla so I get to practice my Korean typing skills.

So far I’m putting my phone in the wireless charger, but just ordered a kit so I can bring it closer to eye level. Not great having to look so far down for directions.
•••
R

Thanks to you guys I have changed over to KakaoMap from Waze. I had no idea how much I was missing with the lane/exit information and updated camera locations. It also doesn't hurt that they have English to KakaoMap. I may look at buying one of these to do phone/Tesla map combo at eye-level:

According to the latest data, Q4 shipment of Tesla vehicles for Korea are scheduled to arrive on 29th of October!
@ReTri, if your Tesla is scheduled to arrive in Q4, then you can probably expect a call from Tesla in early November. This also means that most likely your Tesla will not include USS, not sure if this is a big deal for you, but I find USS extremely helpful especially when navigating tight alleys in Seoul.

Small update from my side:
After a month and a half of owning Tesla, I freaking love this car! I find every excuse I can to go for a drive. I already made over 7000km (4500mi), I went all over Korea and already did bunch of car camping trips. It's absolutely best car I've driven
Also happy to say that I haven't had any issues with the car at all.
There is just one thing that I really hate here in Korea.. When I check sentry mode, I see almost every day someone door dinging my car... Luckily no dents yet and since I have a white color, I can easily wipe off marks with the towel... So yeah, I suggest you to always park your car far away from others if possible

That is awesome news! I am hoping the quarter 3 delivery with the ship in-bound for Pyeongtaek scheduled to make port on Oct. 18th will have mine. I'll update here if I get a call soon.
I'm so glad to hear you have had a great experience with your M3. I really like your photos and it is great to see that your purchase has met your expectations. I'll definitely keep my car away from others in parking lots. The good and bad of the sentry mode I guess!
•••

M
Delivery - Not completed due to (coolant) leak (Austin build)