Poll: What do you use to charge away from home (Canada/US)?

Now that the CHAdeMO adapter's been out for a while, and just before Model Xs appear, I'd like to run this poll again and see what's changed.

Please take 5 seconds to click on this link and reply to the poll. Basically, what methods have you used to charge your car away from home (including at work, in your town, or when travelling). If you've had your car for a while (like 6 months or more) and you haven't yet charged away from home at all, click that option (none).

You can view results after you answer. I'll stop the poll after I collect about 125 responses, and compare the results to the last two times I ran this poll in 2014 and early 2015.
•••

Interesting! CHAdeMO is only 6% (never used one), same as the incidents of wiring someone's circuit breaker box and installing my own 50 amp breaker. Using 14-50 by far the most common slow charge, just like at home. Superchargers the most common fast charge by far when away from home.

Yup. Toss the UMC into the frunk with some #6 wire and a bag of 50 amp circuit breakers, and let's go!

I call ahead and make motel reservations based on whether they have an RV 50 amp outlet. Major motel chains have responded positively to my suggestion that their entire chain should be EV friendly with a 50 amp outlet at each location.
•••

We're just starting to get real results, as now 22 people have responded. I would wait a bit before concluding anything. Also, those percentages are auto computed by EasyPolls and aren't meaningful (they are a percentage of all checkmarks, rather than a percentage of people that responded). When I summarize the results, I'll have meaningful statistics...
••• 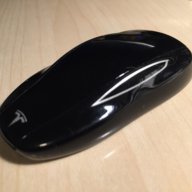 Thanks for doing this poll. I was surprised at how many different methods we have used to charge on the road. Now I wonder if I needed to spend the $450 for the Chademo adapter. Certainly glad we got the NEMA 14-50R to TT-30P RV Plug Adapter to use at RV park 30 amp plug ins.
•••

The CHAdeMO adapter and all the other adapters are in different classes from each other. CHAdeMO charging can be used like Supercharging - planned properly, you can have a no compromise long distance trip. It is fast enough that you can get significant charge while you eat lunch, or even during a relaxing restroom break. All the other chargers require significant waiting for meaningful charge, and thus are typically only used for destination (overnight) charging.
•••

So far 64 people have responded to the poll. Keep the results coming in guys. So far, about 1/3 of people have used a CHAdeMO charger. That's a a lot more than I expected...
•••
R

Interesting results so far...
I'd like to put in a "plug" for the NEMA 6-20 air conditioner sockets. I've used these a bunch of times while traveling. Most hotels have window air conditioner units which use these plugs. They provide 240v and even at 12 amps (which is all that I usually try to draw from them to avoid problems) they can give you about 10 mph which is good for an overnight charge to get you on your way. Just get a room with parking in front and you're good to go. (Although once I had to hang the cable down from a 2nd floor balcony.) I always ask before using and most hotels are fine with me plugging in.
•••

Cosmacelf said:
The CHAdeMO adapter and all the other adapters are in different classes from each other. CHAdeMO charging can be used like Supercharging - planned properly, you can have a no compromise long distance trip. It is fast enough that you can get significant charge while you eat lunch, or even during a relaxing restroom break. All the other chargers require significant waiting for meaningful charge, and thus are typically only used for destination (overnight) charging.
Click to expand...

I am surprised that Chademo is being used by only 1/3rd of people.

I was initially hesitant in buying chademo because of its costs but now this is my 2nd favorite charger ....first one being supercharger
•••

No, just mark that as using an HPWC. Actually, if you look at the destination charging map from Tesla, you'll find tons of HPWC that are at lower amps than 80 amps. The intent of this survey is just to find out what kinds of charging people are using, not so much the power they use.
•••

mspohr said:
Interesting results so far...
I'd like to put in a "plug" for the NEMA 6-20 air conditioner sockets.
Click to expand...

Yes, hopefully with the Model X introduction and rumors of a redesigned UMC and/or HPWC, Tesla will bring out more adapters. One of the reasons I started this poll was to gauge how many people use other types of plugs to help prod Tesla to making different adapters available. So far, this poll is shaping up to have quite different results from the last two times I've ran it, so comparing the historical numbers should be very interesting. The biggest thing that has jumped out at me so far is that over 95% of respondents have used a Supercharger. Tesla has obviously done a very good job at filling in the Supercharger holes for their customers...
•••

OK, we're up to 115 replies so far. Just ten more and I'll shut down this poll and post results/summaries.
•••

First the chart (showing changes over time too), percentage of respondents who used this charging method: 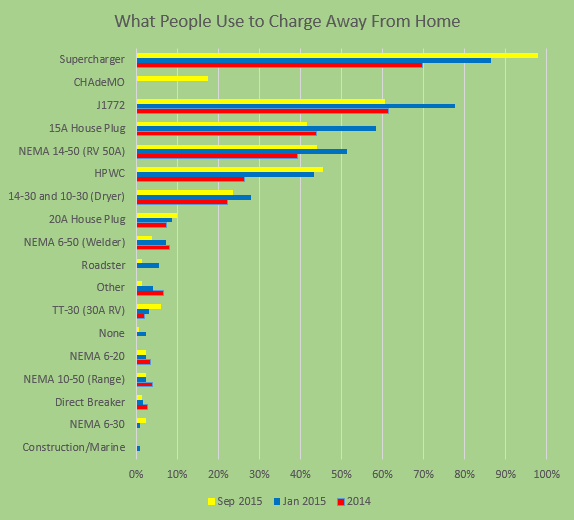 Big, big changes, all brought about by Tesla. Supercharger use has grown to 98% of respondents! That's up from 70% and 86% the last two times I ran this poll. CHAdeMO has grabbed an impressive 17% of respondents in the eight months since the adapter has been out.


Only three other plug types have increased their usage in the last eight months. The HPWC (no doubt due to Tesla's destination charging program), and two much smaller use plugs, the 20A household plug and the TT-30, 120V plug used mostly at RV parks.


I attribute these reductions to the increased use of the Supercharger network. Looks like some people are opting to Supercharge instead of figuring out how to destination charge. 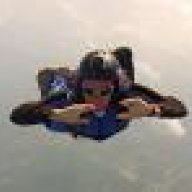 Tucker_Palmatier said:
I didn't get to vote, but agree that the TT-30 is easy to find in many areas. I've used my TT-30 more than any other UMC adaptor.
Click to expand...

Really? Do you charge a lot in campgrounds?
•••

I didn't get to vote either...just an observation...how does your poll account for jurisdictions who have far more high amperage Level II charging stations?

There are plenty of high amp Level II charge stations here in Canada...from what we read on the forum, not so many in most of the U.S. ...Canada's growth in Model Sales would be dwarfed by the total number of U.S. sales...
•••

The poll doesn't account for regional differences. I typically only get 130 responses per poll, so regionalizing would get to pretty small sample numbers. It's a big picture poll, don't get hung up on whether something comes in at 5% or 7%. The trends over time are interesting too.
•••

Cosmacelf said:
Really? Do you charge a lot in campgrounds?
Click to expand...

Sometimes. In the last few months I've found TT-30's at a number of places I frequent.

1. MI Campground, no surprise here.
2. My skydiving drop zone. They put in plugs for campers a long time ago. They look questionable, but work.
3. My county fair grounds, was there for the fair and noticed a bunch of them in parking lots.
4. Local race track

I'm guessing many of these were put in for campers. However, many of the sites are not really camp grounds. Having the TT-30 lets me utilize infrastructure already in place. I have an early MS so I'm only able to charge at 20A. That's probably the biggest frustration to me with the TT-30 outlets. I wish Tesla would update our firmware to let us charge at the full 24A.
•••

Yeah, I've asked Tesla about the possibility of updating the firmware for this (20A limit) but I'm always met with blank stares. I have little doubt it is a software limit. No doubt some software engineer somewhere (who might not even work at Tesla anymore) knows about this, but he's the only one.

If you are handy with a soldering iron, you can do what I've done and build a TT-30 combiner box that allows you to safely tie two TT-30 plugs together to get 240V at 24A.
•••

I got the same blank stare from my service center when asking about the 20A limit. They then had multiple questions about charging off 120v. They seamed to think it was very odd to use a 120v outlet to charge. Claimed I was the first person to ever ask them about 120 charging.

I agree that it is a software or firmware limit. I have dual chargers and still can't pull more than 20A. Very frustrating when every amp counts. Those 4 amps can save you a lot of time.

I've thought a lot about the fact that the older cars haven't received a software / firmware update for this. It leads me to believe that there are configuration files that are set when your car is built and rarely, if ever touched by software update. There is probably a config file that has a variable for max 120v charging. It is possible Tesla never intended an update to these types of files with software updates.
•••

A close call with running out of battery power driving home