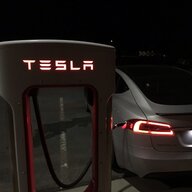 We have a Clippercreek HCS-50 that we use to charge our Model S at 40 amps. There are two behaviors that seem odd but I'm not sure if the issue is with the Clippercreek unit, our Model S, or maybe our J1772 adapter.

Periodically our HCS-50 will have a "charging fault" of some sort while charging where it will interrupt charging our Model S & then resume at 30 amps instead of 40 amps. I don't know if it is the Model S that is deciding when the interruption happens to just resume at 30 amps or if the Clippercreek internal controls are resuming at 30 amps to protect its circuitry. This would happen only once every few weeks but now it's happening daily, usually after only 10-15 minutes of charging.

Secondly, when connecting our Model S where it should just do its "handshake" with the charger & then wait until the scheduled time to begin charging the behavior is a little strange. When plugging in the car to other L2 EVSEs with our J1772 adapter it behaves like my 1st Model S did. It plugs in, the car shows the green ring, the EVSE momentarily lights up that it is sending power to the car, and then the car goes to a blue ring & the EVSE stops showing that it is sending power to the car. However, with our HCS-50 the car will do the green ring & then go to white ring of unlocking the charge cable. And the car will show in the app that it doesn't detect a cable connected or that it detects a problem with the cable. Then when the charge port door times out & tries to close it realizes that it is still plugged in & it shows the blue ring for "waiting to charge". I have tried a couple of public EVSEs and the one at my parents' house & haven't had this behavior repeat itself, but I haven't had the chance to test a public Clippercreek EVSE to see if all Clippercreek units would do this.

I'm not sure if the issue could be with our J1772 adapter, but that doesn't seem likely as we've charged on road trips & in public with it without ever having an error like this. I'm just not sure if the issue is our HCS-50 or our Model S. This EVSE was new when we bought our Model S so it hasn't really been used with any other vehicle other than periodically charging my parents PHEV at 12 amps.

One piece of additional info, we live in an apartment building so there is 3 phase power in the garage. At 40 amps the Tesla usually reports 199-202 volts, depending on time of day & the overall electrical load for the building.

I would encourage you to give the good folks at ClipperCreek a call. Their Tech dept is outstanding and they will probably know the answer right away. They always answer the phone, too!
F

Through our apartment management we contacted Clippercreek. Clippercreek immediately shipped us a new unit, I just didn't want to bother them if that wasn't the problem.

The new Clippercreek unit was installed today & the behavior hasn't changed. So that makes me think the issue might be with the J1772 adapter? Or with our car?
F

Could be a pilot pin issue on the adapter, which is probably the easiest thing to test anyway. Might even be able to get a free one if you're still under warranty.

A
Just had to replace j1772 adapter

Model S: Battery & Charging Jul 17, 2020
Altes
A
V
I have a Tesla and will be getting an additional EV from another OEM. What charger is best ?