So I have had an intermittent problem on driver's rear door latch (5/2015 build) where on pulling the interior or exterior handle, the door would not open 50% of the time - and then be stuck with window down until some time passed or the cable release was used. The window would fall but the latch would not release. I even started having trouble with the cable release not working or requiring extra effort. I greased the latch and nothing changed.

The door control module would be $300+ to change to a Gen 3 and the wiring harness defect I don't really want to know....

I really don't want to deal with Tesla for obvious reasons beyond financial. They could do the door handle by mobile so that is easy enough but is that $300 wasted?

Any thoughts or experience or any info on how these signals are sent?

The other thing that is weird is that a shutdown usually fixes it. I can't be sure but I just tested it again and it worked after the car went to sleep. It almost always works the next time I try but there is usually a drive so I figured it might move a bit. But even now - just sitting in garage, it worked after a shutdown. If it matters, I am on original MCU1 with 93k.
Last edited: Jun 6, 2021
•••
D

A bump and update.
Every single time I go to the car (its been 10 times) and open the back door first, it works. If I open the front door (ie driver's door) first, it won't open. It will require waiting for a shutdown to get working again.
Software? Fuse?
•••
E

Did you find a fix for this? I am having a similar but not identical problem with the rear driver's side door on my 2014 S. So far, I haven't replaced any parts.

I suspect that the door harness of the front driver door is broken inside the door. The rear latch is released by the Door Controle Module which is located in the front door.

My LR only opens from inside. And when I do open it, the RF flies open. SC can't figure it out. My LR window quit also. I'm going to change window motor and complete door mechanism.. See what happens.
••• 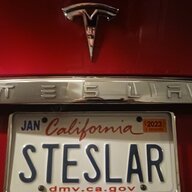 I suspect that the door harness of the front driver door is broken inside the door. The rear latch is released by the Door Controle Module which is located in the front door.
Click to expand...

My RF flies open all the time now. My wife won't ride in car, took many times before it with stay shut. I open drivers door, RF opens. LR window wont work, changed 3 motors and master drivers panel. LR door handle won't work. Changed 3 of those.
I got broken wires or SW problem?
•••

H
Model S - Door handle presenting, but the door will not open!