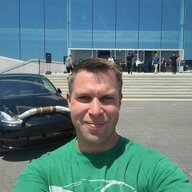 Last week I had a headlamp burn out, which interestingly enough is indicated by the "toy car" on the instrument cluster.

As my car is not equipped with the tech package, it is equipped with halogen lamps. Considering there's probably not a lot of vehicles out there without the TP, this won't apply to many. That said, I always hated that the projector was a very different color (~2700K) than the surrounding LED's (~5500K). Considering the headlamp assembly is still identical, using a projector design that was intended to be used with an HID source, I figured I could easily use an HID conversion or even try an LED conversion.

I decided to give the LED's a shot, as the performance claims appear to exceed those of HID's, on paper; and many of the sets I was looking at on Amazon got excellent reviews. There's a lot of negative reports on LED and even HID lamps (especially if you end up on candlepower forums), which I believe generally stems from people just swapping the lamps on conventional reflector assemblies. I ended up purchasing these LED's on Amazon, which like many others, appear to be generically manufactured and marketed and sold by many different companies. I'll provide some photos below of the install process and initial impressions.

So far, so good. Considering the price, I didn't have extremely high expectations.

As far as I know, access to replace the lamps is from the wheel well. As expected, I had a few of the dozen or so plastic fasteners break during removal.

This is how it looks after removing the plastic tray and folding back the liner....and yes, that fan was unplugged. Not sure what that cooler is used for, but hopefully it hasn't been incredibly important lately.

Accessing the existing lamp once the dust cover is removed.

As you can see, the LED is much larger than the existing 9005 halogen.

It's a rather snug fit, with just enough room to replace the dust cover. Fortunately the LED's cooling fans don't exhaust air directly out the back, as that is tight against the cover.

Comparison of low beams (LED on the right). The light output in these photos appear to be similar, if not better for the halogens. From just a short drive last night, I would definitely say that the LED's output and visibility is much better, however.

It turns out that the MS does not recognize the LED lamps correctly and now the toy car shows both lights off all the time. I assume this measures the lamp's resistance and LED's electronics apparently don't satisfy this target window. Additionally, there is a very slight hum that you can hear from the LED's cooling fan. On any other car this would be a non-issue; however, on the MS there are actually times that these are the only generated noise.

I'd be very curious to compare them side-by-side with someone's factory HID's, and would bet the HID's produce a little more light. Nonetheless, they are definitely an improvement over the halogens both in performance and for the fact that I shouldn't have to replace them again for a long time.
Reactions: freeewilly
•••

Has anyone installed the older HID headlights on a newer (refreshed) Model S?