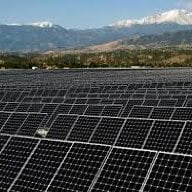 I don't know if anyone else will find this useful, but I thought I might save someone else the same hours of frustration that I experienced.
I went to lube the brake pad contact points and pins in my 2016 MX 75D. Rear pads slid right out with no problems, but the front pads and pins had a lot of corrosion likely due to winter road salt spray. One pad was frozen in place to the point of having to remove the caliper to get it out. When using a wood block and mallet to tap it out, I hit the brake lining and took out a chip, and created some swelling. Not wanting to risk damage to the rotor, I decided to replace both pads on that wheel. [Side note: the reason I waited until 60k miles to do this was because I wrongly assumed that this lubrication had been done by Tesla during the 4 scheduled maintenance sessions I paid for up to 50k miles. The schedule included brake inspection, but the lubrication was clearly never accomplished].
No problem, I say to myself. I'll just jump on the inter-webs and find replacement pads at a local parts store like I've done for the past 40 years. And here's where the multi-hour trip down the rabbit hole began. One site would show a manufacturer's part number compatible with this car, but that same part number on another site would show as incompatible. Some sites only show Teslas from 2017, while others didn't list the 75D in 2016. The BremboUSA site (Brembo brakes are on Teslas) did not provide any information. The information stamped on the pad backing, "FER HP1000/TFF" does not correspond to a part number.
I finally hit gold here: Pads and Discs for TESLA MODEL X (5YJX) 75D AWD
This is the Brembo site for Europe and you can search for brake pad part numbers by model, date of manufacture, and first 5 characters of the VIN.
For my MX 75D, the Brembo front pad part number is P09004 and it is available at Autozone (SKU 1080027). The rear pads are P/N P11024. The front pad part number, according to the site, is the same for essentially all Model S, X, and 3 vehicles. The Model Y did not appear in the list of compatible vehicles for this part number. A set of 4 cost about $111-- expensive, but it's the direct OEM replacement. There may be cheaper compatible replacements from a different manufacturer, but I could not find them and didn't want to take any chances.
Some other notes:
- The wear on the existing pads was negligible. In fact, I did not need to compress the caliper pistons to get the new pads to slide in.
- I did the brake lube on my Model 3 at 12,000 miles and the 2016 MX is less complicated because of the separate parking brake caliper in the rear. Tow mode does need to be engaged (but "Jack Mode" does, of course)
- Especially for those of you in areas where road salt is used, I strongly recommend having this service done every 10,000 miles or so.
Reactions: bhorn, Castlerock, nuP90D and 1 other person
•••
M

Do you know if the spring and pin kit comes with the pads or did you have to purchase seperately? If so do you know the part number on Brembo site so I can just get it all together?

mapatni said:
Do you know if the spring and pin kit comes with the pads or did you have to purchase seperately? If so do you know the part number on Brembo site so I can just get it all together?

The pads did not come with springs and pins. I cleaned the original pins using a Dremel with wire brush, lubed, and reused them.
•••
M

Solarman004 said:
The pads did not come with springs and pins. I cleaned the original pins using a Dremel with wire brush, lubed, and reused them.
Click to expand...

Just for everyone's info I managed to find the hardware kit. It's the same as the one used on Cadillac CTS or STS. Here is the one I bought on RockAuto branded as Dynamic Friction but I'm sure AC Delco, NAPA etc...all sell the same exact part (mfg'd at the same factory in China) under different part numbers. DO NOT buy this from Tesla! They charge $75 for something that I got for $20 bucks (9 for the part, 11 for the shipping!!!) on RockAuto.com Regardless anything you buy at Tesla parts counter is going to be 2x or 3x what you could find for the exact same OE part somewhere else. 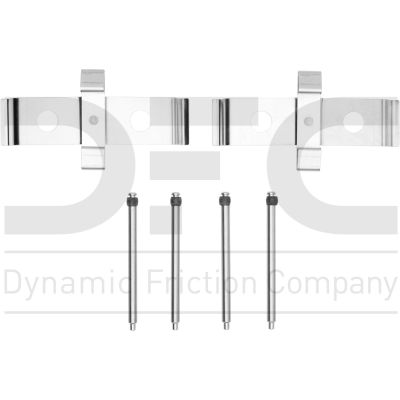 DFC Disc Brake Hardware Kit - Dynamic Friction Company 340-65006. Ships in One Business Day. Buy it and Save at GlobalIndustrial.com
www.globalindustrial.com

After 47K miles the outer pads on my 2017 Model X were only about 1/3 used however the inners had frozen in the calipers (completely caked with brake dust and road crud). As a result the inner pads were down to about 1/3 remaining and the inner disks were grooved / burnt.

I was working under the assumption that I didn't need to worry about the brakes for 100K miles so I basically ignored them. The only reason this came to my attention is because I noticed that even after my most recent alignment the car was still pulling to the right. I took it back to the SC and after they did a more through investigation they told me the front brakes were bad / frozen and handed me an $1100 estimate to replace pads / rotors.

Since I've done brakes on all my cars as long as I can remember I told them no way and brought the car home. Ordered the OE parts from Brembo for $400 (prolly could have done cheaper with other aftermarket parts but decided to do OE) and finished the job in about 3 hours. The most time consuming part of the job was freeing the pins and pads from the calipers. It took me some effort with a hammer / punch to get the pins out (they were totally corroded, hence my desire to find a new hardware kit) and a hammer / block of wood to finally free the inner pads from the calipers. Once cleaned everything up really well with a soft brass wire brush, I coated all the surfaces where the pads make contact with the calipers with Sil-Glyde (I also put some on the backs of the pads and on the pistons) and put everything back together. If you're doing this job, don't forget to push the pistons back into the calipers before removing them by using the 'screwdriver between the pads and disc' trick to push them back in. No need to worry about damaging the pads or the rotors since you're replacing them anyway.

Moral of the story (as many probably already know) is that you should probably do an annual cleaning of your brakes and make sure they are not all caked up and frozen. The regen braking on these cars does two things that we are all probably not used to yet because we've all grown up with ICE cars: 1) we are less likely to notice problems with the brakes because we really don't use them that much, and 2) brakes NOT being used can lead to a situation where they get loaded with crud and frozen which basically causes them to get destroyed.

Anyway, fresh pads and rotors are in along with the $700 in my pocket that I saved by doing the job myself. MOST IMPORTANLY pulling to the right problem is solved! Hopefully folks find this info useful.
Reactions: KalJoMoS and MSM X100
•••
R

Hello, sorry to revive an old thread. My mechanic who does my other cars looked at my 2018 MX P100D and told me all my pads are very low at 52,000 miles. He wants me to buy the pads and he will replace (I am not as handy as some of you). Are these the front and rear pads I need at Autozone?

And do I need to purchase the hardware kit mentioned above?

DFC Disc Brake Hardware Kit - Dynamic Friction Company 340-65006. Ships in One Business Day. Buy it and Save at GlobalIndustrial.com
www.globalindustrial.com

So if you're doing the pads I'd recommend you do the rotors too.

If you can, just go to AutoZone and ask them to source the Brembo pads and rotors for you. I looked at the link you sent and I think that's the right part for the pads but for some reason the website is saying it doesn't match the 2018 Model X. Not sure why.... and yes you will need to purchase the hardware kit separately because it does not come with the brake pads.

I checked BremboStoreUSA.com for the pad / rotor kit and it looks like they are out of stock otherwise I would have just recommended you buy the kit there.

The other place you can go is RockAuto.com. I bought the hardware kit there (I buy parts there all the time) so you might be able to pick them up there as well.

Hopefully this helps. Parts seem to be difficult to find right now due to supply chain issues:-(
•••

Tesla Parts for Sale Thursday at 11:32 AM
MasterC17