Last night I arrived home with only 28 miles left in the tank. For home charging I routinely use my 50 amp /240 volt RV outlet to supply the Tesla NEMA 14-50 plug supplied by Tesla as part of their mobile connector set.

Much to my surprise, after, perhaps a second or two of green charge flashing the charging light turned solid red. Of course, I did all the expected things like resetting the mobile connector and the circuit breaker on the electrical supply. And all to no avail. Even with assistance from Tesla. Naturally, we are located a good 50 miles from any other charging source so we were stuck until we came up with the idea of just using the NEMA 5-15 adapter (regular 110 volt wall socket). At least we were not completely dead in the water -- we could charge at 3 miles per hour.

Anyway, the most significant item is that upon close examination, we discovered the Tesla NEMA 14-50 plug supplied by Tesla as part of their mobile connector set was defective. 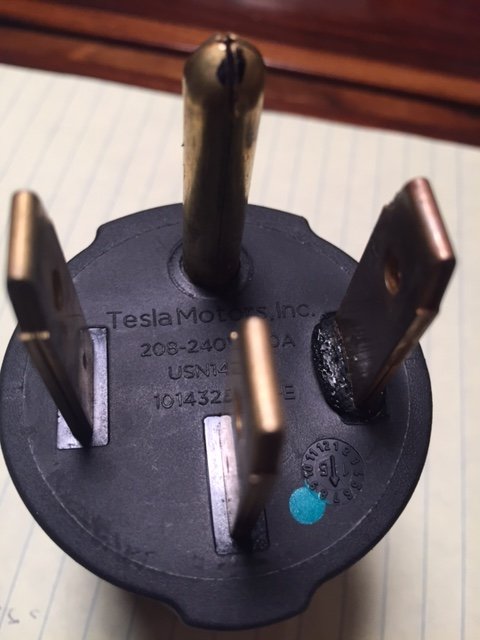 Look carefully at the top most flat blade as it enters the molded body. The way the plastic has melted can be seen.

Now out of fairness, we don't know whether the heat originated in the Tesla plug or in the female socket into which it was inserted. Overall, this event seems highly unlikely. The outlet in use is rated at 50 amps and the model S limits the current draw to only 40 amps which should be well within acceptable limits.

The mothership assistance in California said it's not common but they have heard of this problem as had the Tyson's Corner service center so it isn't a totally isolated problem.

Simply a word to the wise; if you depend on such an adaptor you might want to carry a spare. That's what I'm going to do from now on.
•••

Do you have a picture of the outlet you were plugged into? Did it have damage?

If not, I think you've identified the failure - the tesla adapter. I also use a 14-50 outlet in my garage daily. But I limit the current draw to 25 amps, just hoping that slow charging is better for the battery than 40 amp charging. It may reduce the risk of fire or electrical damage like you had also.

This is indeed somewhat common as Tesla had a batch of these 14-50 adapters with bad welds inside. They issued a recall and replaced them all not too long ago because of this. You can spot a possibly problematic adapter if it has a black face (the side that connects to the UMC). All the revised adapters have a light gray face.

If you have a black-faced adapter, you should call Tesla and get it replaced free-of-charge.
•••
G

The adapter has neither -- it has a white face on the UMC side. Tesla said this was one of the "good" ones and, in any case, is overnighting a new one. We will see how this all plays out.
•••

You definitely ended up with high heat there. I would work with Tesla to get a new adapter. In the meantime, check your receptacle to ensure the wiring looks good and check the tightness of the connection to it to make sure it wasn't loose inside the receptacle. The discoloration of the prong points to extremely high heat of the prong itself, so I would look to make sure your insulation isn't burned badly on the wiring attaching to the receptacle.
•••

For the relatively low cost of an outlet, I think I'd replace it just to be sure. If the problem was a loose connection on the outlet side, then it's going to damage another adapter. If it was the adapter, it may have damaged the outlet. Best to replace both.
•••

Ingineer said:
For the relatively low cost of an outlet, I think I'd replace it just to be sure. If the problem was a loose connection on the outlet side, then it's going to damage another adapter. If it was the adapter, it may have damaged the outlet. Best to replace both.
Click to expand...

Agreed. For the OP: remember that metal transfers heat to other metal, and that plastic melts far more easily than metal. When you see slightly melted plastic on the adapter, it doesn't necessarily follow that the adapter was faulty. If you have a loose screw holding the wire in the receptacle (or a lot of missing strands of wire, etc.), the heat generated there can transfer to the brass prongs and given a good contact area will transfer to the plug side of the adapter, and melt the plastic behind it. The wiring itself will get very hot as well and could melt the insulation.

Check the whole installation and as Ingineer says, probably a good idea to invest $15 for a new receptacle given the discoloration of the prong.
•••
R

Electricfan said:
I also use a 14-50 outlet in my garage daily. But I limit the current draw to 25 amps, just hoping that slow charging is better for the battery than 40 amp charging. It may reduce the risk of fire or electrical damage like you had also.
Click to expand...

The current level isn’t even close to being a problem for the battery, but the idea is good because of the UMC cable. It’s capable of a maximum of 40A and most of them do get pretty hot at 40A. Heat is the main factor in degrading and early failure of electronics stuff, so for extending the life of the UMC, it’s a decent idea to turn it down some from 40A for daily use if you don’t need the extra charging speed every night. I run mine at 31A I think.
•••

Problem is probably related to the recall currently under way in Ontario Canada. Owners are being supplied new UMC sets limited to 32 amps maximum.
•••
G

OK, Guys and Gals, this is the rest of the story.

The general history is set forth earlier in this thread.

This is the conclusion and a final answer as to what the problem was.

For all the reasons set forth above we believed he problem was simply an adapter that somehow had overheated and failed.

So we ordered a new adapter from Tesla, replaced the female wall socket (which also had a female pin which had been overheated) and since we were at it, the several other identical female socket at different locations here on our property were also replaced just in case.

Finally, we were able to get the new adapter by visiting the Tyson's Corner SC (picked up a spare just in case). The SC is 250 miles one way but at least we had a nice 500 mile drive in the Tesla to pick it up. (there is another whole story behind why we had to physically go get it but that's not relevant here).

Being suspicious, I asked the service technician to check out the UMC while I was at the SC. He did that in back and I was assured it was fine.

Anyway, upon returning home the new adapter was installed on the UMC and the UMC plugged into the new receptacle. Guess what? Same problem!

By the way, just to repeat; the problem was that when the powered UMC was plugged into the Tesla there was an initial green flashing ring which within a few seconds went to red and charging (if it ever was on) stopped. The UMC flashed red twice which the book says is a faulty ground.

Now, this was getting aggravating but the situation was pointing more and more to the UMC.

So, back into the Tesla; drive 250 miles (one way) to the same SC and found the same technician. Requested that the UMC be checked again under my direct observation.

Magically, it proved defective!! So drove the 250 miles home with a new UMC. Plugged it in and everything is working perfectly.

By the way, the technician commented that there were quite a few of the "new design" UMCs (which my defective one was) with a similar problem. My replacement UMC was brand new but of an older design (looked identical to me).

Upon reflection, it appears there were two problems: 1) the overheated pin probably from dirt or corrosion AND 2) the UMC itself was defective.

Were they related? Who knows? But the lessons learned are: 1) keep those pins and receptacles clean and free from corrosion and 2) don't assume there is only a single obvious problem. The underlying problem may be less obvious.
•••

Model S: Battery & Charging Aug 23, 2022
Mediocrates
M
F
Can I use this adapter to charge my model Y at an RV park?